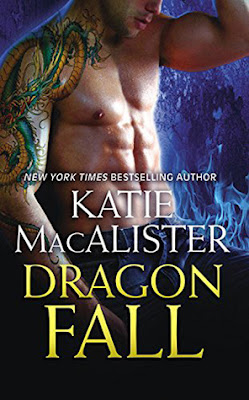 Aoife Dakar must be dreaming. She witnessed when her date died and then after calling the cops, the man shows up without a scratch on him. Of course, the cops think she is crazy and she's taken to a mental hospital. Before her date "died" he had given her a ring.

Fast forward a couple of years and Aoife is out of the mental health facility. She's sure that the supernatural doesn't exist. Therapy and electric shock treatment have assured her of it. However, this doesn't last long once she is almost run over by a talking demon-dog and a naked man lands on her beach proclaiming he's a dragon. Aoife can't believe it, she is not crazy after all!

Kostya is a black dragon. He's in search of a way to break the curse to stop the war between dragons. Falling in love is not on his list. He can't have a mate, his ex-girlfriend had made him leery of taking one. But, Aoife with all her questions might drive him crazy but he can't deny their connection or his desire for her.

This is a great book to read when you want something fun. It has silly parts, the drama is nonexistent. I would categorize it as a romantic paranormal comedy. For me, it hit the spot. I wanted something light, to make me smile. Jim, the demon dog made me laugh every time he talked.

I liked Aoife. She was nice and sweet. She was super tolerant of Kostya's broodiness. For someone who had spent two years in a mental hospital, she was not angry or traumatized.

Kostya's denial of his connection to Aoife could have bothered me in another context but since Aoife took it in stride I let it slide too.

My understanding is that this is a spinoff of Aisling Grey: Guardian series. If you are a fan, Aisling is present in this book too.