The Hotter You Burn (The Original Heartbreakers #2)
by Gena Showalter 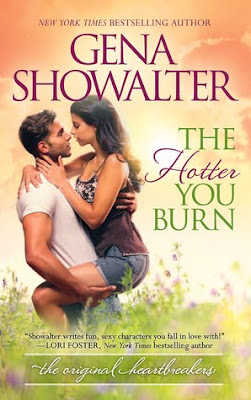 I loved The Closer You Come. It was perfect. So I was dying to read about Beck and Harlow.
Harlow is the girl every one hated in school. She was a bully and she had no limits. Presently, she is a changed woman, but no one cares. Actually, no one really cared after she left school when she was fifteen. Something big happened to her, but the town was happy to get rid of her. No one wants to give her a chance. She wants to work but when no job interview comes her way, and she loses her home, she does what she must to survive.

Beck Ockley came from nothing. He was in the foster care system and this has marked him. He doesn't do relationships, doesn't believe in love. He sleeps around. One night is all he gives his conquests and soon he has gone through almost all the female population in town. When he finds Harlow at his home, he's intrigued by her. Soon he feels protective of her, but he won't give her his heart.

I wished I could say I love this book as much as the first one but I can't. Beck was a disappointment. I got tired of him sleeping around and pushing Harlow away. It got old after a few times. I found myself thinking that Harlow deserved better. He needed to step up his game and deal with his feelings instead of avoiding them and behaving like an immature teenager.
I liked Harlow a lot. She apologized for her mistakes. She was a hard worker and she was determined to stay in the town despite the hate she was surrounded by.
One great thing about reading this series is that I got glimpses into my favorite couple, Jase and Brook Lynn. Also, it sets up for the next couple. West and Jessie Kay are next.