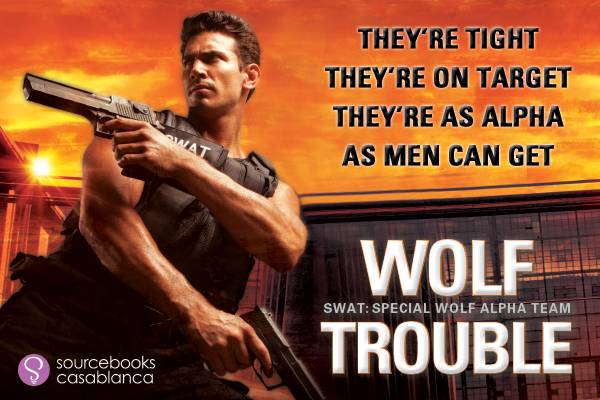 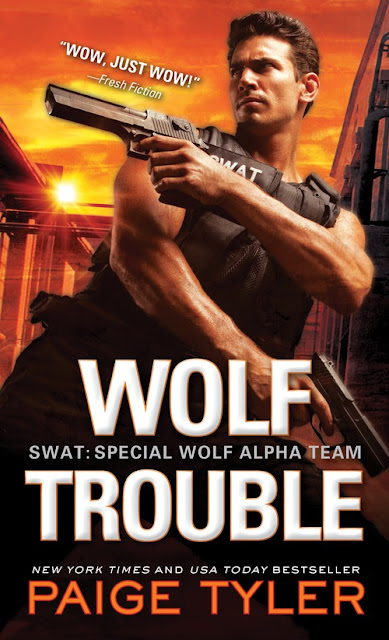 He’s in trouble with a capital T
There’s never been a female on the Dallas SWAT team and Senior Corporal Xander Riggs prefers it that way. The elite pack of alpha male wolfshifters is no place for a woman. But Khaki Blake is no ordinary woman.

When Khaki walks through the door attractive as hell and smelling like heaven, Xander doesn’t know what the heck to do. Worse, she’s put under his command and Xander’s protective instincts go on high alert. When things start heating up both on and off the clock, it’s almost impossible to keep their heads in the game and their hands off each other…

Sometimes having really great hearing sucked.
Khaki was fielding questions from her new teammates about her background—where was she from, did she have any family, how long had she been a cop, how long had she been a werewolf—when she heard Riggs tell Sergeant Dixon that he didn’t want her on his team.
Crap. And here she thought her first meeting with her supervisor had gone well.
She thought it had gone better than that. Dixon had told her about Riggs when he’d picked her up from the airport, filling her in on his background and training methods. He’d sounded like the real deal, and someone she could definitely learn from. As soon as Dixon had introduced her to the man, she’d known he was someone special. She couldn’t really say why, but all of her newly discovered werewolf senses told her that she and Corporal Riggs were going to mesh perfectly. He exuded confidence, yet he didn’t come off as arrogant or cocky. Not like that jackass ex-boyfriend of hers.
It probably didn’t hurt that he was so damn attractive. In a room full of Adonis-class hunks, Xander Riggs stood heads and shoulders above the rest. He wasn’t necessarily taller, or better built. And it wasn’t that he was more handsome than the other guys. It was simply that the combination of dark hair, chocolate-brown eyes, and kissable lips really did something for her.
Then there was his scent.
The moment she set foot in the compound, she realized that the unique scent she’d picked up from Dixon back in Lakefront wasn’t actually that unique. It turned out that what she’d smelled was werewolf scent. She confirmed that when she walked into the training room and got assaulted with sixteen different versions of that same smell. Each one was subtly different, which meant she’d be able to identify each man on the team easily from now on, but in general, all of them smelled like a werewolf.
But then Riggs had walked into the training room, and snap! The scent coming off him was so tantalizing she’d almost leaned forward to get a better sniff. She controlled herself—barely. Shoving your nose into your new supervisor’s neck and snuffling at him like a pig probably wasn’t the kind of first impression she wanted to make.
She’d still been appreciating every subtle nuance of her squad leader’s scent when they’d shaken hands. And when he smiled…she’d gotten all warm and fuzzy fast.
She was just thinking her biggest problem was going to be not crushing on her new squad leader—a problem she was more than ready to live with—when she’d heard Riggs say she wouldn’t work on his team.
Worse, everybody else in the room heard it, too. Most of them tried to hide it, but she saw the surprise on their faces as they heard Riggs saying anything and everything to get out of having her on his squad. Becker looked pissed when Riggs tried to pin the blame on him, saying he would be so distracted by her presence that he’d get himself killed.
She turned back to the guys, wishing she could crawl off somewhere to hide. This introduction had gone from perfect to craptastic in less than five minutes, and she didn’t have a clue why.

Paige Tyler is the New York Times and USA Today bestselling author of sexy, romantic fiction. She and her very own military hero (also known as her husband) live on the beautiful Florida coast with their adorable fur baby (also known as their dog). Paige graduated with a degree in education, but decided to pursue her passion and write books about hunky alpha males and the kickbutt heroines who fall in love with them.

Giveaway
One copy of Hungry Like the Wolf and Wolf Trouble
U.S. entries only