Breaking Her Rules (Beyond the Cage #1)
by Jennifer Snow 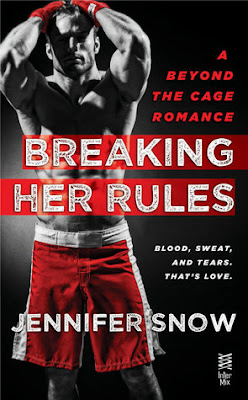 Walker Adams made a serious change to his future. Just months before becoming a lawyer, he left his career behind to pursue his future in MMA fighting.  His father is not down with his decision and removes his support. His trust fund is gone.  Walker has no choice but asks for help and he ends up staying with his sister Kylie's long time friend Gracie Andrews.

Gracie swore to herself never to have a life like her mother did. Jumping from relationship to relationship, living from paycheck to paycheck, dressing from hand me downs. The first chance she got she was going to College on a scholarship swearing never to return to town.  She needs stability in her life. She has a great job, a boyfriend who is the epitome of success. The last thing she needs is to start doubting her feelings when her long time crush moves in with her.

~~
Beyond Her Rules was a fast read. I understood why Gracie craved stability. She didn't do anything wrong. She wanted a good job with a good future. Her childhood and adolescence were not easy. She was determined to succeed and never go hungry again. I understood why she had to keep away from Walker. He was the opposite of secure for her. A guy with no job, no money and with an up in the air future.  What I didn't like was she not cutting ties with Erik earlier, once she realized he was not for her.
Walker..hmm .. I liked him. He was open with what he wanted from Gracie. He never knew how Gracie felt about him when they were younger. He's not to blame for it. The only thing that nagged me had to do with his irresponsibility towards his fighting. He was late to training, thought about skipping, etc. Only in the last part did he finally show me what I wanted to see from the beginning.
Just little things that didn't work for me but overall I enjoyed it.
I want Tyson's book now.