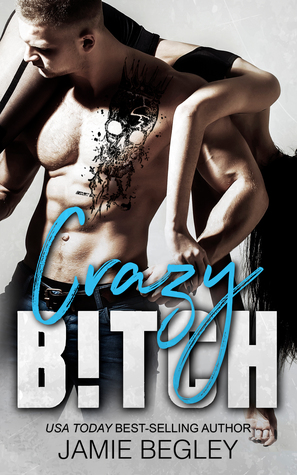 My mother used to have a saying for everything.

“You can’t be pretty and lucky.”
She wasn’t pretty or lucky.

“You have to kiss a lot of toads before you find your Prince Charming.”
I kissed too many of those. Sorry, but Prince Charming isn’t in Hicktown, Kentucky.

“Hell is paved with good intentions.”
Surprisingly, that one is true. Why? Because ...

I intended to stay away from Calder Riggs.
I intended not to fall in love with him.
I intended to find a man who wasn’t a loser or a joker.
Oh well, I’ve never been afraid of Hell, anyway.

"I can be the man you're looking for."

It's hard to rate this book. I'm kinda disappointed in it. I'm so used to more drama and my heart breaking with multiple crying spells but Crazy B!tch didn't have these components. Don't get me wrong, the book is good is just not what I'm used to when I read a JB's novel.

Crazy B!tch has known Calder Riggs for many years. Once, she was infatuated with him but he messed up by not showing up to her home at the right time. Instead, he was with someone else and high as a kite. Crazy B!tch doesn't give second chances. She has given too many already to other people and she's done. She wants to find a nice guy and settle down like most of her girlfriends have.

Calder Riggs knows he made a lot of mistakes. He hurt his brother, the MC and Crazy B!tch. He has never forgotten her and seeing her with a looser doesn't help. He knows they can have something good if only she will give him a chance.

I love Calder. He owns up to his past mistakes and transgressions and he's trying to make amends to all the ones he wronged. He knows he hurt so many but he will live the rest of his life clean and dedicated to his club and family.

Crazy B!tch was not as crazy as I thought she could be. She was loyal to a fault and she just wanted to feel loved and supported. She could defend herself and her friends. She didn't give her heart lightly but once she did, she was all in.

There were a lot of things I liked about this book. First, the Treasure Hunt and the one behind it, Greer. He has this evil funny side and loves to torture the Last Riders which made me love him even more. Then there was Gavin. My heart broke for him. It was so nice to see his brother and Calder trying to help him heal. I can't wait to see who's the lucky gal to steal his heart. As for the funny moments, I can tell you, they were plenty. Penni provided a lot of them. I was in stitches laughing. Poor guys, that's all I'm going to say about it.

One thing, I wish Jamie would have expanded more is about Lucky and his ordeal. I wanted to be a fly in the Last Rider's compound and hear everything those characters were going through. Hopefully, we learn more on the next Last Rider's book.

I can't finish my review without saying how much I enjoy this crazy world and how Jamie Begley has made me fall for so many characters and their stories.