Fantastic Beasts and Where to Find Them
by J.K. Rowling 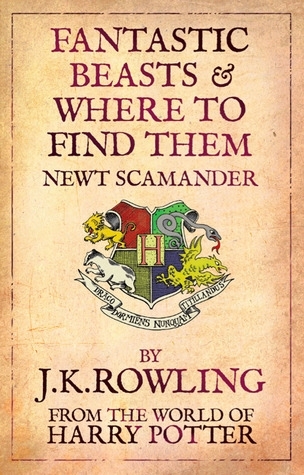 Title: Fantastic Beasts and Where to Find Them
Author: J.K. Rowling

Fantastic Beasts and Where to Find Them, Newt Scamander's classic compendium of magical creatures, has delighted generations of wizarding readers. With this beautiful, large-scale new edition illustrated in full color, Muggles too will have the chance to discover where the Runespoor lives, what the Puffskein eats, and why shiny objects should always be kept away from the Niffler.

Proceeds from the sale of this book will go to Comic Relief and J.K. Rowling's international charity, Lumos, which will do magic beyond the powers of any wizard. If you feel that this is insufficient reason to part with your money, one can only hope that passing wizards feel more charitable if they see you being attacked by a Manticore.

I bought the audiobook thinking it was going to be the screenplay for the movie. My fault for not double checking.

Anyway, it was nice going back to Harry Potter's world.  We have seen some of the beasts mentioned in this book as part of the HP's books and movies. Others, we already know from mythology or legends, for example, the unicorn, the centaur, the Griffin and the Phoenix to mention a few.

The book is supposed to be written by Newt Scamander. He "writes" this novel because he wants everyone to know about the type of beasts that the world has. He wants to help everyone identify them and realized their true potential and danger level. Of course, Muggles can't see them and if they do, they find a way to convince themselves, what they saw was a figment of their imagination.

I'm amazed at the amount of detail JK Rowlings puts into this book. She creates a fantastic classification of beasts. Each beast has a full description. I like that in the audio, we get to listen (in the background) to the noises associated with each beast. This made it possible for me to form a better image of them in my head. However, I found out, the book version has side notes supposedly written by Harry and sometimes Ron since the published book says "Property of Harry Potter".