Aerospace engineer Esther Abbott doesn’t believe in love, but she’s perfectly happy hating her screenwriter neighbor, Jonathan. Until she’s forced to make a devil’s bargain with him: if he distracts her best friend from a mouth-breather ex, Esther will be his science advisor for the sci-fi script he’s writing. Her patience is put to the test when it’s time to fulfill her end of the deal. But the more time she spends with her nemesis, the more hate turns into attraction—and attraction into something much deeper. As Esther’s carefully-constructed defenses start to crumble, will love be her undoing or her salvation?

Intermediate Thermodynamics follows in the tradition of contemporary romantic comedy favorites like Penny Reid, Sally Thorne, and Jennifer Crusie. This sweet, enemies-to-lovers romance is the second in a series of standalone rom-coms featuring geeky heroines who work in STEM fields.

“He’s cute,” Jinny whispered when he was out of sight.
Esther gave her a sidelong glance. “Who?”
“Him. Your neighbor. Whatshisname.”
“Jonathan? Ugh. No. He’s not.” Pretentious, beanie-clad, farmer’s-market-shopping hipsters weren’t Esther’s type. Objectively, she supposed he might be considered attractive—so long as he didn’t open his mouth and start talking. He was just so damn annoying, it was impossible to separate his looks from his personality.
“Yeah, he is,” Jinny insisted. “He looks like a young Jake Gyllenhaal. Don’t tell me you haven’t noticed.”
“He does not look like Jake Gyllenhaal.” Esther didn’t even like Jake Gyllenhaal, but she felt this was an unfair aspersion against him that required her defense.
“Come on, he’s got that great, thick, wavy dark hair—”
“Which is always covered by those dumb beanies he wears.”
Jinny sniffed. “I like a man in a beanie.”
Of course she does. Stuart wore beanies all the time. So did half the men in LA under thirty, but still. Esther felt justified in her loathing of them.
“Plus, he’s got those soulful blue eyes,” Jinny added.
Soulful? What was she talking about? Esther wrinkled her nose. “You can’t even tell what his eyes look like under those hipster glasses.”
“I love those glasses! Guys in glasses are super hot. Oh!” Jinny reached over and smacked Esther on the arm. “You know who else he looks like? Dev Patel.”
Esther stared at her. “Dev Patel is Indian.”
“I know that. Duh.”
“And looks nothing like Jake Gyllenhaal or Jonathan, both of whom are white.”
Jinny laid her magazine aside and leaned back, crossing her legs. “It’s the hair. Jonathan has the same great hair Dev Patel has. The kind you want to run your fingers through.” She wiggled her fingers for emphasis. “And that beard. God, I love a beard.”
Stuart had a beard. Although his hair was golden brown instead of Jonathan’s darker, almost-black-brown.
Esther’s eyes narrowed as she tried to decide whether Jinny was actually interested in Jonathan or projecting Stuart onto him. “How long have you felt this way about my neighbor?”
Jinny shrugged and reached for her mimosa. “I’ve always thought he was cute.” Her phone vibrated beside her, and she picked it up. “Ugh. I wish Stuart would just leave me alone.”
Esther frowned. “What does he want?”
Jinny set her phone down without replying. “Forgiveness. Reconciliation. More sex. Take your pick.”
“I’m telling you, you should get a restraining order.”
“Thanks, your honor, but I don’t need a restraining order. It’s just Stuart.”
Stuart, who’d been gaslighting Jinny for the better part of six months. Who had her convinced she was dating above her level and should be grateful for his half-assed attentions. Who steered her around like a child.
Esther eyed her suspiciously. “You’re considering it, aren’t you? Taking him back.”
Jinny didn’t say anything.
Jonathan reappeared in the courtyard with a forty-pound bag of mulch balanced on his shoulder. He skirted around the edge of the pool and dumped it onto the ground by Esther’s chair, next to a bed of freshly planted begonias.
“What are you doing?” she asked, peering at him over her sunglasses.
“Mrs. Boorstein asked me to pick up some mulch for the new plantings.” He wiped his hands on his jeans and headed back toward the carport.
Jinny leaned over and smacked Esther on the arm again. “He helps little old ladies with gardening? That is so sweet!”
Esther wasn’t sure Mrs. Boorstein would appreciate being called a little old lady, but she had to agree it was kind of sweet.
They heard the sound of a trunk slamming, and Jonathan reappeared with another bag of mulch hoisted on his shoulder. He dropped it next to the first one, then bent over to slide it a few feet to the left, spacing them out at either end of the bed.
His backside was right in Esther’s eyeline, and she had to admit it wasn’t the worst view she’d ever seen. Fine. So he had a decent body. He irritates the hell out of you, remember?
Jinny smacked her on the arm a third time and Esther jerked her gaze away, flushing slightly.
“Nice ass,” Jinny mouthed silently, tilting her head in Jonathan’s direction.

Also in the Series

Susannah Nix lives in Texas with her husband, two ornery cats, and a flatulent pit bull. When she’s not writing, she enjoys reading, cooking, knitting, watching stupid amounts of television, and getting distracted by Tumblr. She is also a powerlifter who can deadlift as much as Captain America weighs. 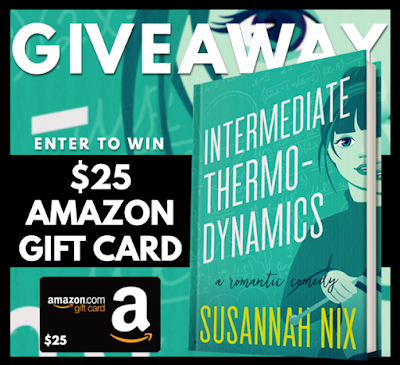