Grigori (Brothers of Ash and Fire #1)
by Lauren Smith 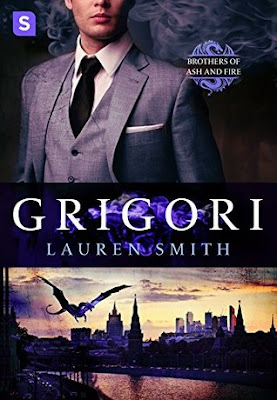 "Lauren has created a new series that will capture you from page one! Grigori is exactly what a dragon should be. Smoking hot, sexy, and wickedly dangerous. You're going to love this book!" - New York Times bestselling author Alexandra Ivy

Grigori Barinov is the eldest in an ancient line of dragon shifters and the guardian of his family’s lands and fortune. Sworn to protect their history and magic, he won’t rest until he neutralizes any threat to their existence. When he discovers an ancient manuscript that exposes his family and their dragon lineage has fallen into a mortal woman’s hands, he knows he must get the book back by any means necessary. If that means seducing a nosy American woman with an intoxicating scent, he is more than willing to carry her off to his palatial home deep in the heart of Russia.

Madelyn Haynes has never fit in. As an adopted child she grew up in a loving home but never felt as though she belonged. Plagued by mysterious dreams she’s had of a silver scaled beast ever since she was a little girl, she is convinced dragons are real. While in Russia working on her PhD in mythology in order to escape the ridicule from fellow professors, she unexpectedly crosses paths with the sexy and dominating Grigori, and after just one night with the man whose eyes seem to burn, she starts to change inside. Isolated in the Russian wilderness Grigori calls home, Madelyn can’t help but fall under his sensual spell, yet something deep inside her calls out that she can’t trust him. She has to show the world dragons are real to salvage academic reputation, even if it means costing her the heart of the dragon she’s falling in love with. 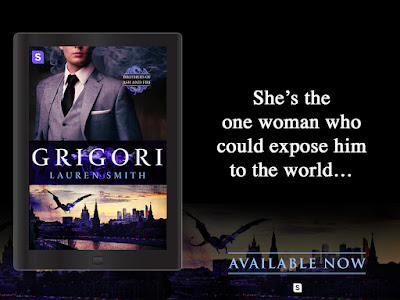 Grigori Barinov stood in front of the floor-to-ceiling windows in his executive office, staring out over the city of Moscow. Body alert, every muscle rigid, the expensive gray wool suit he wore felt tight as he shifted. Below him, people were passing on the streets. A flash of silver caught his attention. It was the wink of a diamond earring dangling from a well-dressed woman’s ear. With eyes that were ten times as powerful as a mortal’s, he scanned the streets, absorbing every detail.
Searching . . .
“For the last few days, his senses had picked up on something in his city. A creature he didn’t recognize. It made him restless. Moscow was filled with supernatural beings—werewolves, vampires, shifters of all kinds, and magically gifted humans were all present—but none of them fired up his instincts. No, he’d never felt this before in his life, but he knew in his gut what it was. An enemy was in his city, a creature that posed a threat to him. As a dragonshifter, few creatures in this world could give him pause and put him on his guard. He only wished he knew what sort of beast it was so he could hunt it down and remove the threat.
The sapphire dragon tattoo on his forearm itched, but he didn’t scratch it. He knew the dragon inside of him was trying to warn him to stay on his guard. The phone on his desk buzzed and his personal assistant, Alexis spoke.
“Mr. Barinov, you have a call from the Russian State Library.”
Every muscle in his body tensed. There was only one reason anyone from the Russian State Library would be calling him. That damn book by James Barrow. He’d been too softhearted and Barrow had been so earnest. He’d gone against his better judgment and allowed the Englishman to spend a year studying him and his brothers. And he’d been paying for it for the last 200 years. He’d been lucky Barrow’s heirs had sent him the journal. Thankfully, it had never been sent to a publisher; Barrow had kept his word about his writings remaining a secret.
I should’ve burned it. But he hadn’t been able to. Barrow had become a friend and Grigori hadn’t wanted to destroy the memory. There was also something fascinating about reading an insightful human’s observations about him and his brothers.
He couldn’t leave it at his office or his home in the country. His enemies had frequently broken into both places more than once, searching for anything they could use against him. He’d thought he’d be clever and tuck it away in a library amid other obscure texts that no one ever looked at in a guarded collection. It had been safe all these years, hiding in plain sight. Until now.
“Mr. Barinov?” Alexis queried again.
“Put the call through.” He turned away from the window and walked over to his mahogany desk just as the phone rang.
He answered. “Yes?”
“Mr. Barinov, my name is Yuri. I’m a guard for antiquarian book room at the Russian State Library.” A man spoke, his voice hushed and anxious.
“Yes.” Grigori waited, his patience on a razor’s edge.
“When I first took over security for this room I was given strict and confidential instructions to call you if anyone ever came asking about a certain title in the collection. Someone checked out the Barrow book, Mr. Barinov.”
Grigori closed his eyes, holding his breath for a moment. “And?”
“I followed protocol. She did not leave the library with the book. But . . .” The guard hesitated. “She was taking pictures. I have no instructions regarding pictures.” The phone cracked as Grigori’s temper flared.
“Pictures?”
“Yes. She was using her phone.” The guard’s voice wavered as though he sensed Grigori’s building rage.
Pictures. Fuck, if any evidence of his existence was discovered and exposed in the world of mortals it would put a target on his back and that of his two brothers. The magical world knew of his family, the last three brothers in ancient bloodline of Russian Imperial Dragon shifters, but the rest of the world didn’t know . . . Couldn’t know.
“Can you detain her until I arrive?” he asked the guard.
“But she’s leaving now—”
“Stop her!” Grigori barked. The other end of the phone was full of panting, the flapping of rubber soled shoes on marble, a muffled shout for someone to stop. Grigori tried to picture the library in his mind, wondering why the guard couldn’t catch up with this woman. Finally the footsteps stopped, and Grigori heard the sounds of streets of the city muted beneath the guard’s gasping for breath.
“She ran—I couldn’t catch her before she left the library. She’s gone. But I have the book.”
Grigori sighed. “I will come to collect it. When I do, I want every detail you have about this woman. Her name, where she’s from, everything.”

Lauren Smith is an Oklahoma attorney by day, author by night who pens adventurous and edgy romance stories by the light of her smart phone flashlight app. She knew she was destined to be a romance writer when she attempted to re-write the entire Titanic movie just to save Jack from drowning. Connecting with readers by writing emotionally moving, realistic and sexy romances no matter what time period is her passion. She’s won multiple awards in several romance subgenres including: New England Reader’s Choice Awards, Greater Detroit BookSeller’s Best Awards, Amazon.com Breakthrough Novel Award Quarter-Finalist and a Semi-Finalist for the Mary Wollstonecraft Shelley Award.