The Hollow Girl by Hillary Monahan 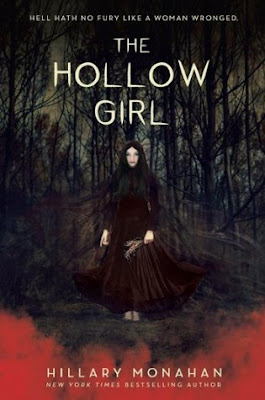 Now they must repay her with their blood and flesh.Bethan is the apprentice to a green healer named Drina in a clan of Welsh Romanies. Her life is happy and ordered and modest, as required by Roma custom, except for one thing: Silas, the son of the chieftain, has been secretly harassing her.One night, Silas and his friends brutally assault Bethan and a half-Roma friend, Martyn. As empty and hopeless as she feels from the attack, she asks Drina to bring Martyn back from death’s door. “There is always a price for this kind of magic,” Drina warns. The way to save him is gruesome. Bethan must collect grisly pieces to fuel the spell: an ear, some hair, an eye, a nose, and fingers.She gives the boys who assaulted her a chance to come forward and apologize. And when they don’t, she knows exactly where to collect her ingredients to save Martyn.

The Hollow Girl was the perfect horror novel to put me in the spooky mood. This revenge story was equal parts dark, suspenseful, gritty and emotional. Rape is a large element of this book, so there are definitely trigger warnings for that in this story, which the author does point out. I thought that the author handled this sensitive topic in a very understanding and careful way. I don't have any personal knowledge on the topic, but it seemed like the author really looked into it so she could try to present carefully, which I appreciated. I also really liked the way the author represented the Romani culture. Again, I don't know a lot about this subject, but the author expressed her connection to the culture which made her writing seem like a really good representation of the culture. Bethan, the main character, went on a really interesting and dark journey. Bethan definitely could be viewed as an anti-hero at times, BUT I WAS LIVING FOR HER. She went through a lot in this book and I really understood why she did the things she did. Bethan was a character that wanted revenge and I did not blame her. Her character development was progressed perfectly throughout this story. I don't know what it says about me, but there were times where I was actually cheering on Bethan as she would take body parts from boys. WHAT A QUEEN!!!!

There was a hint of romance in this book, but it was never a prominent element of this book. After the dark things Bethan went through, she wasn't really interested in getting involved with a boy. Even though the boy of interest was extremely adorable and kind, I totally understood why Bethan had her hesitations and it was handled very well.
The beginning of the book was a little slow for me. There were a lot of plotlines that were introduced, but it still felt like not a lot was happening? It took some time for the book's pacing to pick up and get more addicting. Once the book did pick up the pace, I was a lot more invested in the story! I was also hoping for a little more emotional ending for this story. I enjoyed the ending, but I do wish there would have been a little more attention drawn towards the internal conflicts of the characters at the end.
Overall, this was a really unique and interesting story. If you are a fan of creepy and suspenseful revenge novels that pack an emotional punch, then I definitely would recommend checking out this book!