The Devil's Triangle
by Catherine Coulter and J.T. Ellison 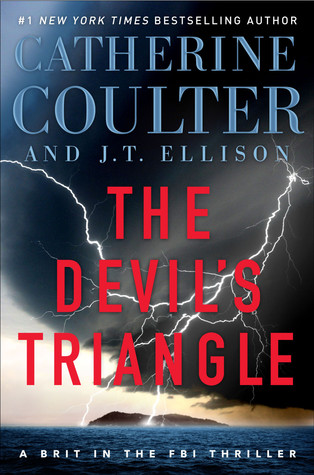 From New York Times bestselling authors Catherine Coulter and J.T. Ellison comes the highly anticipated thriller in their Brit in the FBI series, featuring special agents Nicholas Drummond and Michaela Caine in their new roles as heads of the Covert Eyes team—but will their first case be their last when the Fox, the enigmatic and dangerous thief, reappears?

FBI Special Agents Nicholas Drummond and Michaela Caine are the government’s Covert Eyes—leading a top-notch handpicked team of agents to tackle crimes and criminals both international and deadly. But their first case threatens their fledgling team when the Fox calls from Venice asking for help.

Kitsune has stolen an incredible artifact from the Topkapi Museum in Istanbul, and now the client wants her dead. She has a warning for Nick and Mike: she’s overheard talk that a devastating Gobi desert sandstorm that’s killed thousands in Beijing isn’t a natural phenomenon, rather is produced by man. The Covert Eyes team heads to Venice, Italy, to find out the truth.

From New York to Venice and from Rome to the Bermuda Triangle, Nicholas and Mike and their team are in a race against time, and nature herself, to stop an obsessed family from devastating Washington, DC.

First, I should say I'm new to this series so I know I missed a lot of what these characters have gone through to get them to this point. Saying that I thought it was just ok.

The novel begins when we meet the "Fox", a famous thief. Her real name is Kitsune and she has been hired to steal Moses' staff from the Topkapi museum. She's good at what she does so after stealing it she requires payment and this is where things go wrong. She almost dies in the process and later on, she discovers her husband Grant has been taken by her client.

Kitsune turns for help to the people she knows already. She asks Nicholas Drummond and Michaela Caine for help. These two are part of an elite FBI team, The Covert Eyes. Nicholas and Mike can't say no because they soon will learn that someone is able to control the weather and might be responsible for the storm in the Gobi desert. Mike and Nicholas get closer to the real culprits Cassandra and Ajax, a pair of evil twins who are after the Ark of the Covenant when a threat is issued to Washington DC.

I'm not sure if the series is full of paranormal events but this one has a little bit of it. It took me by surprise, I just wasn't expecting it. Maybe that's why I was not too engaged with the story. I was hoping for more police procedure and the thrill of the chase than expecting a Justice League episode.

Now, to the things I liked. Kitsune. She was great. Love that she is pretty much Neal Caffrey from White Collar but with a darker side. She was smart and resourceful. I didn't view her as an enemy or a bad person but she wasn't good either. She has all these shades of gray which made her very interesting to me.

The two FBI agents, Nicholas and Michaela were also good. I enjoyed their banter and they had good chemistry.

Overall, The Devil's Triangle was a fast-paced novel with enough action. If you like some paranormal thrown into it, then this one is for you.

A complimentary copy was provided by Pocket Books in exchange for an honest review.
Posted by MrsLeif at 8:27 PM