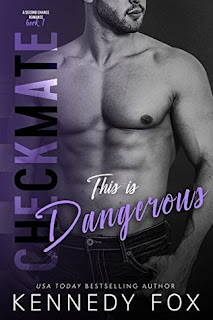 Logan Knight is a real life knight in shining armor.  A detective godsend in a sleek black suit has me thinking less than secretive thoughts. Brooding and mysterious, he's the kind of guy every girl instantly notices. Between his seductive smirk and charming good looks, it's no wonder I can't help the way he makes me feel whenever I'm near him.  Too bad he's unavailable—or so he says.

He thinks I'm a do-gooder who shouldn't get involved with a guy like him. His past is messy and relationships just add to that. He insists the timing is all wrong and he's devoted to his career, but I don't buy that excuse for a second. I see the way his body tenses and his jaw ticks every time another guy is around me. He just won't admit it, but I'm more determined than ever to show him what he's missing.

I'm a devoted animal rescuer and I'll risk everything to save them, but when a dramatic turn of events puts both our lives at risk, I'm positive Logan will write me off for good. But when he asks for my help with a personal crisis, I know it's my last chance to finally show him I can handle anything he throws my way—messy past and all.


He might think he has me all figured out, but I'll prove him wrong no matter what he thinks. This game of push and pull has me running in circles. One wrong move and we could both lose.

So here we are with the last couple in this incredible series by the amazingly talented Kennedy Fox! I have binged all of these books so far and this series has me feeling some type of way!

I was jumping for joy when these books started setting up a story line in the background for Logan and Kayla. Kayla is such a sweet and caring person. She spends her time as a decorator, volunteering at an animal shelter, and hanging out with her friends. Logan is a sexy as hell police officer, need I say more. Maybe it's the fact that they share friends and are brought together time and time again or maybe it's the fact that they have both struggled in their past, but they end up forming a somewhat unusual friendship. The more time they spend together the more we see how compatible they truly are, and more I fall in love with this couple! Logan and Kayla's story is like peeling an onion, slowly but surely all will be uncovered.

This duo knows how to write a story that tugs at my heartstrings one minute and has me fanning myself in the next! I was left completely and utterly mystified by that ending too! Kennedy Fox has been playing with my emotions, but I'm holding out hope that they will make the pain worth it in the end.