Beautiful Maids All in a Row by Jennifer Harlow 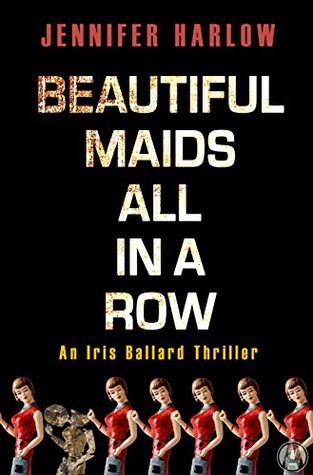 Dr. Iris Ballard’s glory days are behind her, so when Luke Hudson, her former FBI partner and onetime lover, asks for help constructing a psychological profile of an elusive serial killer who murders single mothers and dumps their bodies in the woods, Iris turns him away. She just wants to be left alone with her infomercials, her German Shepherd, and her vodka. That is, until she gets a peek at the case files.

The media has dubbed him “the Woodsman.” But after Iris learns the sickening details held back from the press, and as she sets foot onto the scene of his latest crime, she assembles a portrait of a more complicated, enigmatic, meticulous man. Control is his motivation. He thrives on it. Soon he even tries to manipulate the investigation by contacting Iris, hoping to rattle the woman he considers an intellectual equal.

The game is on. Iris thinks she has a read on her target, enough to push his buttons, to make him lose control. But when the Woodsman gains the upper hand, Iris faces the most painful reckoning of all—with her own violent past.

Wow! This is the way an FBI thriller is supposed to be written.

There are so many things I liked about Beautiful Maids in a Row. The main character Iris Ballard is a mess at the beginning of the story. She was a profiler for the FBI and has helped captured many high profile cases until one monster got too close. Two years ago, she lost her husband and herself. She has not been living. Instead, she spends her time on a job she couldn't care less, popping pills, drinking vodka and smoking cigarettes. She's suffering from guilt, survivor's guilt plus PTSD. She lives away from everyone, with a high-tech alarm system and a German Shepherd for the company. It's not until her ex-partner Luke Hudson comes asking for help with a case that Iris begins to live again.

Luke is in charge of an FBI investigation. A serial killer is on the loose. The victims are all light-eyed, brown hair, single mothers. They are abducted in the open and then their bodies are found in the water in the woods. Luke needs help and he knows no one is better at this than Iris. He also has some personal reasons for wanting Iris back. They had been friends and once they were more than that.

Of course, I can't forget the monster who is raping and murdering these women. He has a voice and it's twisted and depraved. I was at 27% when I realized who it was. To my surprise, it was revealed not too long after, who he was. It made this suspense even more interesting. Iris has to battle with a very intelligent man. Someone who thinks involving her in his game elevates the stakes.

I'm very pleased with the turn of events. I liked Iris from the very beginning. She was damaged but who wouldn't be after what she has gone through? She was smart and cocky at times but she could also feel shame and was immersed in guilt. She was self-destructing slowly until Luke came knocking.

Luke was easy on the eyes but I wasn't sure about him until I got to know him better. Then, I jumped on the Luke bandwagon. There is a point when I almost backtracked in my opinion of him but he proved himself quite deserving of Iris.

I would recommend this book to any suspense lover. It was a thrilling ride!