BACK IN THE GAME by Erin Kern 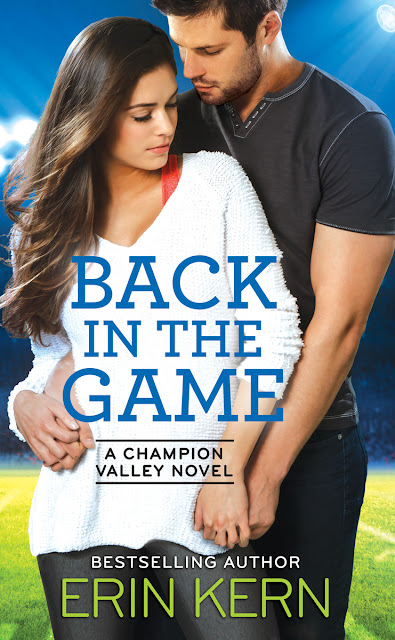 BACK IN THE GAME by Erin Kern
A Champion Valley Novel
will be published on October 31, 2017 by Forever.

Stella Davenport wasn't made for small-town life. Sure, teaching ballet in Blanco Valley, Colorado, is great, but she longs for the chance to perform in a big city. Stella swore she'd never let anything get in the way of her dream-until sexy, broad-shouldered Brandon West walks back into her life. Stella is determined to resist him, even if arguing with Brandon is sexier than any foreplay.

For Brandon, it's always been just him and his son, Matt. Knowing that love only leads to heartbreak, he isn't looking to expand his family any time soon. Stella, with her long, gorgeous legs and infectious laugh, is a breath of fresh air he didn't even know he'd been missing. But when she's offered her dream job in Chicago, will he be willing to put his heart on the line? 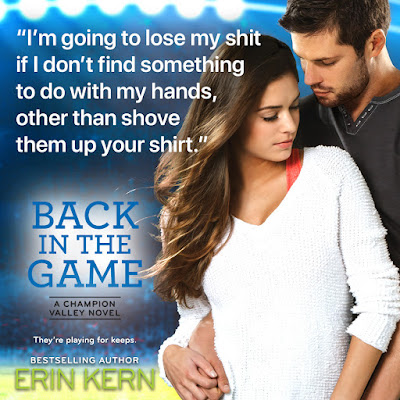 Was it just her, or had their almost-kiss a few months ago not been this hot? This intense? She didn’t remember her panties almost going up in flames or her desire threatening to choke her.

“A kiss doesn’t equal a relationship,” Brandon told her.

Stella nuzzled her nose against his. “But we’re not kissing.”

“Keep telling yourself that, Stella.” Before she could respond, before she could even exhale the breath she’d been holding, his mouth was there. Fitting over hers, exerting a gentle pressure that had her fingers digging into the flesh on the back of his shoulder.

When her eyes dropped closed, her other senses took over and magnified the virile man who was so much bigger and harder than she was. His arm enclosed her waist, tugging her closer, inch by slow inch until she was flush against him. Chest to chest. Feet to feet. Leg inserting between hers so that his muscled thigh was nestled perfectly in between her softer flesh.

Brandon West could use his mouth as a lethal weapon to bring women to their knees. Because if he hadn’t been holding her to him with such firmness, she would have sank the second his mouth touched hers. And then she didn’t have time to think about all the other things she wanted him to do to her, because his tongue smoothed over her lips in gentle, yet not-so-subtle invitation to open the hell up.

He didn’t have to ask her twice. Without thinking about where they were, or the cars and people hovering around outside, even her looming anxiety, Stella obliged and parted her lips. With a hesitation that was sweet, yet longing, his tongue slowly pursued hers, touching just the tip before retreating again.

Since it wasn’t enough, since the minimal contact had opened an emptiness she’d been living with for a long time, Stella did her own pursuing. Her tongue chased his, testing the warmth of his mouth. When he groaned against her and tightened his hand on the back of her head, the heat was kicked up a notch. The passion she’d once possessed but that had gone dormant from lack of use awakened with an explosive burst of fireworks. She returned his groan with one of her own when he tilted her head to change the angle of the kiss, allowing him to dive deeper.

And she let him, because Brandon West was an overpowering man who held her passion and trust in the palms of his hands. The question was, what would he do with it?

Their tongues continued to dance and weave around each other until someone opened the front door of her studio, and the outside sounds of cars and people intruded on their moment of intimacy.

“Oh!” the startled voice announced, ripping her and Brandon away from each other like two teenagers who’d been caught necking by the principal.

Her mother stood by the door, her eyes wide to match the smile on her face, as though to say, Score one for the team, honey.

She held her hands up and backed toward the door.

“Don’t mind me,” she told them. Then offered Stella two thumbs up. For Pete’s sake. “But good job, honey. Way to take my advice.”

And then she was gone, blowing back out the door as quickly as she had interrupted them, taking Stella’s dignity with her.

One of Brandon’s dark brows lifted, showing nothing of the passion he’d exhibited just a second ago.

“Ah . . . ,” she began, not sure how to explain Gloria Davenport to someone who didn’t know her.

“Just ignore her. She obviously hasn’t taken her medication today.”

The slight curl of his mouth widened. “You look like her.”

His brown eyes narrowed, scrutinizing way too much. “Is this another thing you don’t want to talk about?”

Right on. She lifted a shoulder and pretended her heart wasn’t still pounding from their kiss. “I have no issues with my mom.” At least none that she was willing to share.

Brandon nodded. “You know, one of these days all those walls you’ve thrown up are going to come crashing down.”

As Stella watched Brandon saunter out of her studio as though he hadn’t just knocked her socks off with his mouth, all she could think of was how right he was. 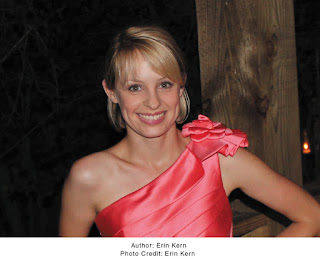 Erin Kern lives in north Texas with her husband, two kids and their dog. She loves BBQ, Texas sunsets, antiquing and high school football games. The Champion Valley series was inspired by Erin's love of Texas football, small towns and happy endings. When she's not at the computer working on her next tale, she can be found spending time with her kids or curled up with a good book.

Add SERIES to your shelf on Goodreads: http://bit.ly/championvalleyGR 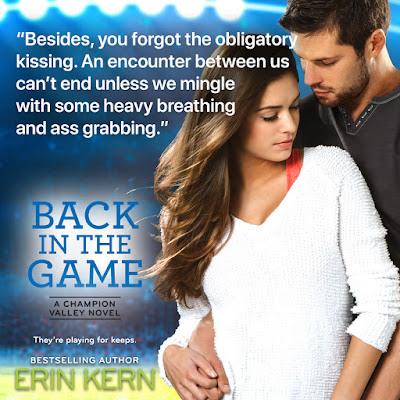