Touch of Red by Laura Griffin 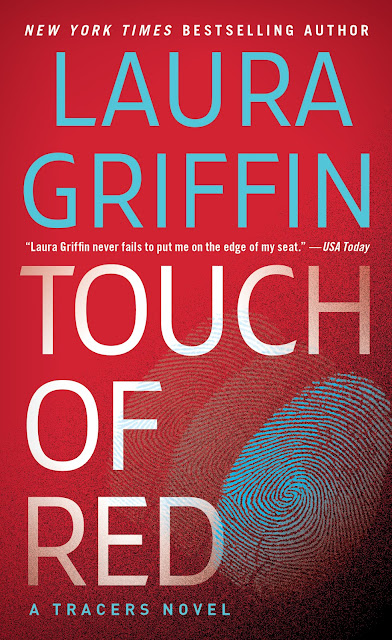 When crime scene investigator Brooke Porter arrives at the home of a murdered woman, the only thing more shocking than the carnage is the evidence that someone escaped the scene. But where is this witness now? A thorough search of the area yields more questions than answers, and before Brooke even packs up her evidence kit, she’s made it her goal to find the witness and get them out of harm’s way.


Homicide detective Sean Byrne has seen his share of bloody crime scenes, but this one is particularly disturbing, especially because Brooke Porter is smack in the middle of it. Sean has had his eye on the sexy CSI for months, and he’s determined to help her with her current case—even if it means putting his attraction on hold so he and Brooke can track down a murderer. But as the investigation—and their relationship—heats up, Sean realizes that keeping his work and his personal life separate is more complicated than he ever imagined; especially when the killer sets his sights on Brooke.

It's so crazy good going back into the Tracers' world!

Laura Griffin has a talent for romantic suspense and police procedure description that keeps my interest from start to end. Sometimes when a book is too descriptive about the investigation associated with a case, my eyes glaze over but it's never the case with her stories.

The main couple is composed of Brooke Porter and Sean Byrne. We have met them in other books and now it's their time to shine.

Brooke is a CSI with the Delphi Centre who's called to the murder of a young woman. Brooke gets there before the police arrive. She knows something doesn't add up with the crime scene. Something big is missing. Brooke is very good at her job but not so much with her personal life. Her relationships have never worked and her latest one with a cop is still affecting her since she doesn't seem to be able to shake him. That's why she's taking a break from men except Sean makes her want to break her own rules.

Sean is the homicide detective assigned the case Brooke is on. Sean has been watching Brooke for a while and he's very interested in getting to know her but he knows he has to be patient. He can tell something is going on with her but when she keeps on making the case personal and he believes she's attracting the killer's attention, he won't be able to keep his distance any longer.

I like this couple. The romance was smooth and it was easier to believe since they have known each other for a while. They each have respect for the other's jobs. There was only one instance when I thought Brooke was taking the wrong path. I was screaming in my head: you have no weapon, no training, no self-defense moves, quit jumping the gun!

Laura also gives us a look into a future couple and I'm already liking them together. Callie needs someone strong for her and I think "weapon guy" is just what the doctor ordered.

I love the Tracers series and I can absolutely recommend it. Pick up Touch of Red, it won't disappoint you.

Enter this giveaway for the chance to win: $50 Amazon cardGiveaway dates: Oct. 29-Nov. 12

a Rafflecopter giveaway
Posted by MrsLeif at 8:31 AM