The Kennedy Connection by R.G. Belsky 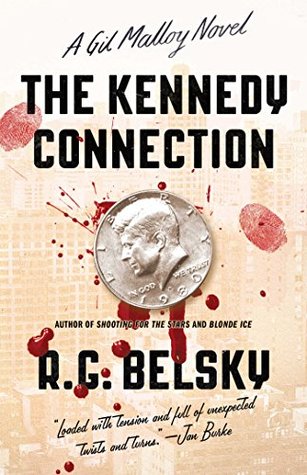 Half a century after the assassination of President John F. Kennedy, someone is killing people on the streets of New York City and leaving behind a bizarre calling card of that tragic day in Dallas.

In this bold and entertaining thriller from a true media insider, discredited newspaper reporter Gil Malloy breaks the story of the link between seemingly unconnected murders—a Kennedy half dollar coin found at each of the crime scenes. At the same time, a man emerges who claims to be the secret son of Lee Harvey Oswald and says he has new evidence that Oswald was innocent of the JFK killing.

Malloy, who has fallen from grace at the New York Daily News and sees this as an opportunity to redeem himself as an ace reporter, is certain there is a connection between the Oswald revelations and the NYC murders, but first he has to get someone to believe him. Convinced that the answers go all the way back to the JFK assassination more than fifty years ago, Malloy soon uncovers long-buried secrets that put his own life in danger from powerful forces who fear he’s getting too close to the truth.

Two tales of suspense fuse into an edge-of-your-seat thriller as Malloy races to stop the killer—before it’s too late.

I knew after reading Blonde Ice that I had to go back and read the other two books in the Gil Malloy series. I loved Blonde Ice and I was excited to begin reading The Kennedy Connection.  It took no time for me to become immersed in poor Gil's drama. Gil's is down on his luck. There is only one word that could describe his downfall: Houston.

Houston is the prostitute Gil based a whole series of newspapers articles on. There was just one tiny problem, no one could confirm Houston existed. Gil never really met her but he knew of her through all the people he interviewed. Although morally wrong he made the decision to print the articles despite not been able to prove she was real and when he was discovered, his credibility as a newspaper reporter plummets by the time the book starts. Due to recent panic attacks, Gil is forced to see a therapist and when a cop friend asks him to investigate a shooting that happened over a decade ago, Gil feels this is a way towards recuperating some on his own dignity. However, Gil is asked to interview a man who claims to be the son of Lee Harvey Oswald and he alleges he has proof his father didn't kill JFK. Gil can't turn down this opportunity without realizing this will take his life on a collision course, one he might not be able to drag himself out of.

Whoa... what a great way to spin of the murder of JFK! What if  Lee Harvey Oswald is not the killer or sole killer of JFK? A lot of conspiracy theories say he wasn't and R. G. Belsky takes you on a formidable ride towards a different scenario.

It was a pleasure reading this thriller. There are so many things I liked about it. I loved Gil's relationship with his ex-wife. He was to blame for the distance he created in their relationship and later on their divorce, but he's willing to recognize his faults and remain friends with her. He told her how important she was to him. She's also the only person he truly trusts and cares for.

What I love the most about this book is how good Gil is as an investigative reporter. Once he has a lead, he doesn't quit until he knows there is anywhere else to go with the information.

I like that Gil had to understand that he needed help and by the end, he was willing to do whatever it took to make himself better as a friend, reporter, and altogether better human being.

I do have to say that I missed how brilliantly sarcastic Gil can be. In The Kennedy Connection, his sarcastic personality is there but not as predominantly as in the last book.

"Death is the great equalizer"