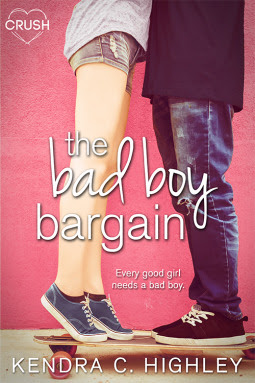 Baseball player Kyle Sawyer has many labels: bad boy, delinquent, ladies’ man, fearless outfielder… Only one of them is actually true. But then sweet ballet dancer Faith Gladwell asks him to help wreck her reputation, and everything goes sideways.

Faith knows a thing or two about love, and what she had with her cheating jerk of an ex wasn’t it. When he starts spreading rumors about her being an Ice Queen, Faith decides it’s time to let a little bad into her life.

Lucky for her, Kyle Sawyer—dark, dangerous, totally swoonworthy Kyle Sawyer—is landscaping her backyard over Spring Break. Shirtless. And if she can convince him to play along, “dating” Kyle will silence the rumors.

But Faith’s plan threatens to expose Sawyer’s biggest secret of all…and that’s a risk he’s not willing to take.

Disclaimer: This book contains drop-the-book-and-fan-yourself kisses...and touches. Fall in love with a bad boy at your own risk.

I loved Finding Perfect by Kendra, so I was very excited to read another YA romance by her. I was not disappointed with this book! The Bad Boy Bargain was another sweet and fun romance that I enjoyed immensely. I think I can officially that Kendra knows how to make me swoon.The main female character, Faith, was such a sweetheart. I really liked being inside her head and seeing how thoughtful she was. I was pleasantly surprised with how sassy she could be! I loved how her attitude would come out and create hilarious banter with Kyle. Kyle, oh Kyle, he was precious. I think I feel in love with him within the first chapter. He came off as a bad boy, but he really was just a snuggly teddy bear. I found myself smiling ear to ear while reading his chapters. He was simply adorable. The romance between Faith and Kyle was predictable yet so wonderful. I really enjoyed watching their romance develop as they slowly fell for each other. I thought the author did a great job at creating believable chemistry between Faith and Kyle. They were so sweet and precious together. I couldn't help but swoon at their romance moments and steamy touches.I thought the plot of this book was very fun! I love reading stories about couples who fall in love through fake relationships, and this book was the perfect example of those type stories. I found some of the drama to be a bit unnecessary, which made some of the book a little slow for me. However, the book's pacing was good as a whole. Overall, I thought this was a fun and delightful read. There were some slow and predictable parts of this story, but it was still extremely enjoyable. I am hoping Kendra continues to write YA romances because I know they will be great!

Badass, troublemaker, girl magnet—familiar words always followed Kyle from his locker to his senior English classroom. Or from the cafeteria to the parking lot. Or from the locker room to the baseball field. Anywhere he went, the whispers followed.

Today, it went something like, “Ooh, I know who we should vote most likely to drop out before graduation,” as he walked by. Or, “I heard he banged two girls at once at North Texas last weekend. College girls, man!” Or, “Dude, I heard MLB scouts are coming to the games to watch him play.”
He wished that last one were true.

Kyle zipped his hoodie up tighter, acting like he couldn’t hear a word. The dark red hoodie and a pair of headphones were pretty thin armor, even if he did encourage the stories…the lies. Suttonville High was a big enough maze of suck without letting the truth out.

And no way, no how, was he showing any sort of weakness ever again.

For a second, Kyle stiffened. Old habits died hard. But he recognized the voice and let his shoulders relax. Cade Adams, unlike the hundreds of rich, snobby kids crowding the halls, was worth waiting for. He slowed his stride until Cade caught up, looking disheveled. For an amused moment, he wondered if Cade was running from a pack of zombified football players, then he noticed the pleading look on Cade’s face. The same one he’d ignored from a half dozen other guys.

He shook his head. “Nope, still not going.”

“It’s supposed to be a great party,” Cade said, running a hand over his hair to coerce it back into shape. It was a little too long, and curls kept springing up on his head. “First night of spring break, man. All the seniors are going.”

“Everyone except me,” Kyle said, quickening his pace.

“Come on,” Cade pleaded. “I need to be your wingman. Just once. Your leftovers would be a feast to us mere mortals.”

That’s what half the baseball team said, too. But if he let someone be his wingman, they’d find out really quick that he wasn’t what everyone assumed. “Sorry, not my scene.”

“Fine. Okay, I get it.” Cade’s crooked smile didn’t do much to hide his disappointment. “Just…think about it.”

He strode off, breezing through the hall filled with students in designer clothes as if his Iron Man T-shirt, wild hair, and faded jeans didn’t matter to him. And it didn’t—at some point last fall, Cade had become cool. Either that, or he’d stopped caring what any of them thought.
Lucky bastard.

Kyle stalked to chemistry, praying he’d pass today’s test. Being dyslexic turned the periodic table into a medieval torture device, even if his teacher was good about giving him tutoring on the down low. He couldn’t let anyone know he actually cared about his grades, aside from passing to play baseball.

“I heard he’s going out with some girl at Texas Woman’s,” a girl whispered to another as he walked in, as if he couldn’t hear them.

“Wish I knew for sure if anyone here has a chance,” said the other girl, a pretty senior who had a reputation of being a man-eater. “Because I’d ride that pony all over town.”

Kyle’s ears flamed up. To hide his discomfort, he rolled his neck, getting a little satisfaction out of the wary stares after the vertebrae cracked. That’s right, the scary kid just cracked his back. You puny humans shouldn’t try that at home.

The bell rang and he sank into his desk, adopting his typical pose of “I’m only here because the truant officer made me show up today” with his legs stretched out in the aisle. Mrs. Moody, the chem teacher, rolled her eyes. She saw right through him. And if she could, how much longer would it be before everyone else did?

During the test—in which chemical compounds morphed into ancient Hebrew right before his eyes—he couldn’t shake the conversation with Cade. He felt bad about letting the guy down, especially since he hadn’t been much of a friend the last few years, but he hated those parties because of the baggage that rode on them. Namely, his reputation.

Because who at Suttonville would believe that the resident delinquent, skateboard-riding, drag-racing, smart-mouthed chick magnet Kyle Sawyer was actually none of those things? 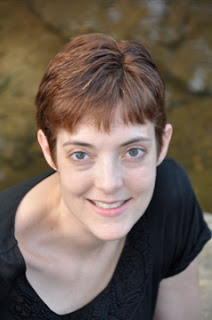 Kendra C. Highley lives in north Texas with her husband and two children. She also serves as staff to four self-important and high-powered cats. This, according to the cats, is her most important job. She believes in everyday magic, extraordinary love stories, and the restorative powers of dark chocolate.

Posted by MissDaemon at 8:05 AM