Today we have the cover reveal for Resurrection Heart by Wendy Lynn Clark. Check it out and grab some of the earlier Robotics Series today. And preorder your copy today! 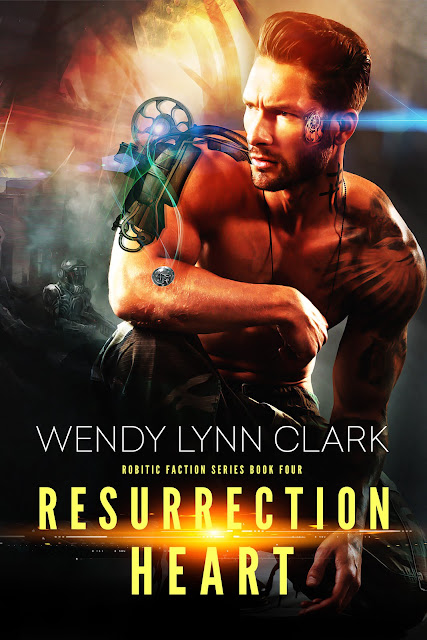 A mercenary with a chip on her shoulder. A cyborg warrior with an attraction stronger than his emotion-suppressing implants. Trusting in passion is the only way they will survive…

Talia’s a hardened mercenary owned by the Antiata Deterrence Company until she pays off her debt. She has found only one man worthy of her carefully guarded trust: reformed criminal Logen, the sexy gunner in her ragtag unit of misfits. He’ll never return her feelings, but his strong, silent gaze awakens her uncontrollable desire.

Logen’s passion-suppressing implants have been malfunctioning since the moment he laid eyes on the gorgeous, capable spotter. She sees past his ugly scars to the man inside and he wants nothing more than to wrap her sweet, hot body in his protective embrace.

But when he’s falsely accused of murder, Talia and Logen become targets on the run. The mercenaries must fight off robot assassins, hungry wildlife, and a growing mutual attraction that threatens their survival. Caught in the hostile jungles of a steamy alien planet, Talia must decide whom to trust with her life… and possibly her heart.

Resurrection Heart is the fourth book in the Robotics Faction saga, and starts an all new chapter in the series of sci-fi romance novels. If you like starships, robots, and hot romance, then you’ll love the latest offering from Wendy Lynn Clark.

“Come out,” he said, low and furious. “Come close. Give me the chance to kill you this time.”

The figure slipped out of the shadows.

Relief crashed through his body like a wave, filling his eyes with moisture and choking the back of his throat. Impossible, because he was stented. But the impossible feeling built and built, wave on top of wave, until his blurred eyes couldn’t see through the salty water and his whole body relaxed and gave in, blinking streaks matching the sweat dripping down his cheeks from his forehead.

She looked better. Tall and strong, fearless and determined, and with a heart the size of the entire planet. The chest that contained it was pretty nice too, with slim hips and thick, grippable thighs, and breasts that begged for his palms, and a mouth that promised wonders for a long, hot night.

His cock twitched to life.

But impossible or not, his insistent erection pressed against his ripped flight suit, just like it had all those weeks ago when he had last seen her.

His stents worked perfectly until the moment Talia got too close. Not anyone else. Just Talia.

Then they stopped working and he was flooded with emotions, wrecked with them.

“Thanks for the warning,” she said, reacting to his comment for the CO.

He barely heard her. “Are you okay?”

She was wearing an exoskeleton cinched around the waist, and she slid forward smoothly, on the power of a hover disk. Her normally golden face looked pale, and even her lips had turned a shade of ashen. Her hands, gripping the outside seams of the metal skeleton for comfort, shook. And her eyes watered too, but her trembling lower lip suggested it was not from relief.

“Why the hell do you care?”

That sounded like her. He started to relax again. “You don't look like you should be upright.”

He shifted. The manacles clinked. “Sorry I couldn't visit you in Medical.”

“I wouldn't want you to.” Bitterness tinted her words. “I have a few questions.”

Logen concentrated on her. Drinking in the sight.

Once, he saw her taking off her belt, shimmying out of her suit, exposing yards of creamy skin to his gaze. Moonlight and firelight had cast blue and golden glows to her rounded breasts, her hourglass waist, and most importantly, her heart-shaped ass.

He had failed her. He swore to himself he would not do so again.

Wendy Lynn Clark is from the vibrant green Pacific Northwest. She writes contemporary and science fiction romance with sexy heroes and undefeatable heroines, as well as sweeping epic fantasy and creative nonfiction. Her words are infused with wonders from her travels—teaching in Japan for three years, earning her MA in Brighton, and studying abroad in Greece. When she’s not hiking in the Cascade mountain range, she’s writing on her couch with a steaming cup of tea and her two snuggly calico cats.

Her books are a mix of soaring imagination, blockbuster action, and thrilling romance. They are recommended for anyone who enjoys a well-told story with a happy ending guaranteed.

For up to date promotions and release dates of upcoming books, sign up for the latest news at her website: www.wendylynnclark.com.

Catch up on the Robotics Series Today!