We are excited to share with you that the  Judith McNaught titles listed below are available for the first time in E-Book! If you previously read any of these amazing titles, revisiting them in E-Book is not “All for Naught,” as each E-Book will contain original, new content (a letter) from Judith McNaught.

*The giveaway is open internationally.* 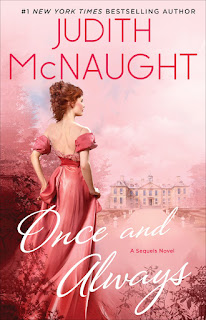 Once and Always
9781501145520
$7.99
Victoria Seaton, a blithe and fiercely independent orphan, leaves her home in America to travel across the vast Atlantic to claim her long-lost inheritance: a labyrinthine English estate named Wakefield. There she encounters her distant cousin, the notorious, proud, and mysterious Lord Jason Fielding. Drawn to his magnetic charisma, Victoria can’t help but suspect that like her, he harbors a dark and painful past. Neither Victoria or Jason are able to resist one another’s charm but, in a moment of blinding anguish, Victoria discovers the shocking truth that lays at the heart of their love—a love she had dreamed would triumph. 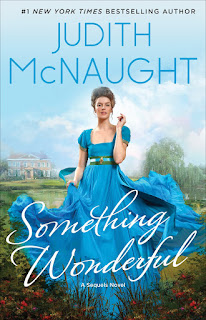 “Judith McNaught not only spins dreams but makes them come true” (RT BookReviews) in this sensual and moving tale of a tempestuous marriage facing its ultimate test. Alexandra Lawrence, an innocent country girl, and Jordan Townsende, the rich and powerful Duke of Hawthorne, have always had a stormy relationship. But when she is swept into the endlessly fascinating world of London society, free-spirited Alexandra becomes ensnared in a tangled web of jealousy, revenge, and overwhelming passion. But behind her husband’s cold, haughty mask, there lives a tender, vital, sensual man...the man Alexandra married. Now, she will fight for his very life and the rapturous bond they alone can share.

Elizabeth Cameron, the Countess of Havenhurst, possesses a rare gentleness and fierce courage to match her exquisite beauty. But her reputation is shattered when she is discovered in the arms of Ian Thornton, a notorious gambler and social outcast. A dangerously handsome man of secret wealth and mysterious lineage, Ian’s interest in Elizabeth may not be all that it seems. His voyage to her heart is fraught with intrigue, scandal, and a venomous revenge. As a twisting path of secrets takes them from London’s drawing rooms to the awe-inspiring Scottish Highlands, Elizabeth must learn the truth: is Ian merely a ruthless fortune hunter at heart? “Well-developed main characters with a compelling mutual attraction give strength and charm to this romance set in nineteenth-century Great Britain” (Publishers Weekly). 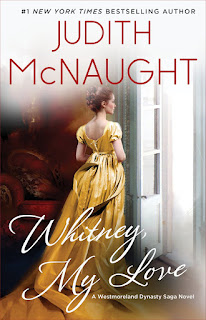 A saucy spitfire who has grown into a ravishing young woman, Whitney Stone returns from her triumphant time in Paris society to England. She plans on marrying her childhood sweetheart, only to discover she has been bargained away by her bankrupt father to the arrogant and alluring Clayton Westmoreland, the Duke of Claymore. Outraged, she defies her new lord. But even as his smoldering passion seduces her into a gathering storm of desire, Whitney cannot—will not—relinquish her dream of perfect love. Rich with emotion, brimming with laughter and tears, Whitney, My Love is “the ultimate love story, one you can dream about forever” (RT Book Reviews).

Abducted from her convent school, headstrong Scottish beauty Jennifer Merrick does not easily surrender to Royce Westmoreland, Duke of Claymore. Known as “The Wolf,” his very name strikes terror in the hearts of his enemies. But proud Jennifer will have nothing to do with the fierce English warrior who holds her captive, no matter what he threatens. Boldly she challenges his will—until the night he takes her in his powerful embrace, awakening in her an irresistible hunger. Suddenly Jennifer finds herself ensnared in a bewildering and seductive web of pride, passion, and overwhelming love. This beloved tale about two defiant hearts clashing in a furious battle of wills in the glorious age of chivalry “will stay in your heart forever and be a classic on your shelves” (RT Book Reviews, Top Pick).

In this unforgettable romantic adventure, a teacher of wealthy young ladies finds her life changed forever when she travels from the wilds of America to elegant London. Sheridan Bromleigh is hired to accompany one of her students, heiress Charise Lancaster, to England to meet her fiancé. But when her charge elopes with a stranger, Sheridan wonders how she will ever explain it to Charise’s intended, Lord Burleton. Standing on the pier, Stephen Westmoreland, the Earl of Langford, assumes the young woman coming toward him is Charise Lancaster and reluctantly informs her of his inadvertent role in a fatal accident involving Lord Burleton the night before. And just as the young woman is about to speak, she steps into the path of a cargo net loaded with crates. Sheridan awakens in Westmoreland’s mansion with no memory of who she is; the only hint of her past is the puzzling fact that everyone calls her Miss Lancaster. All she truly knows is that she is falling in love with a handsome English earl, and that the life unfolding before her seems full of wondrous possibilities. 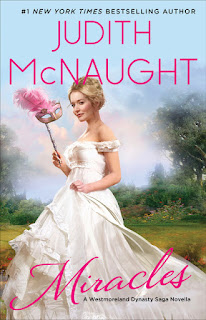 Now available for the first time ever as an e-novella, New York Times bestselling author Judith McNaught’s short historical romance Miracles—which ties up ends left open in the Westmoreland Dynasty Saga—is available for the first time ever as a standalone e-novella. In Regency London, world-weary lord Nicki du Ville receives an outrageous proposal from Julianna Skeffington, who is Sheridan Bromleigh’s charge from Until You. 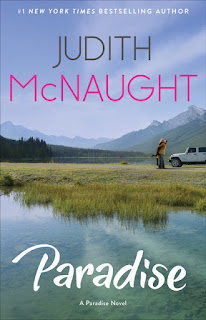 “Judith McNaught comes close to an Edith Wharton edge” (The Chicago Tribune) in this stylish and fast-paced classic. Ruthless corporate raider Matthew Farrell is poised to move in on the legendary department store empire owned by Chicago’s renowned Bancroft family. In the glare of the media spotlight, it’s a stunning takeover that overshadows the electric chemistry between Matt, once a scruffy kid from steel town Indiana, and cool, sophisticated Meredith Bancroft. Their brief, ill-fated marriage sparked with thrilling sensuality but ended with a bitter betrayal. Now, locked in a battle that should be all business, dangerous temptations, and bittersweet memories are stirring their hearts. Will they risk everything for a passion too bold to be denied?

A rootless foster child, Julie Mathison has blossomed under the love showered upon her by her adoptive family. Now a lovely and vivacious young woman, she is a respected teacher in her small Texas town and is determined to give back all the kindness she has received, believing that nothing can ever shatter the perfect life she has fashioned. Zachary Benedict is an actor whose Academy Award-winning career was shattered when he was wrongly convicted of murdering his wife. After the tall, ruggedly handsome Zack escapes from a Texas prison, he abducts Julie and forces her to drive him to his Colorado mountain hideout. She’s outraged, cautious, and unable to ignore the instincts that whispers of his innocence. He’s cynical, wary, and increasingly attracted to her. Desire is about to capture them both in its fierce embrace but the journey to trust, true commitment, and proving Zack’s innocence is just beginning. “A mixture of virtue and passion that is almost—ahem—perfect” (Kirkus Reviews) this is a captivating tale that fans will adore. 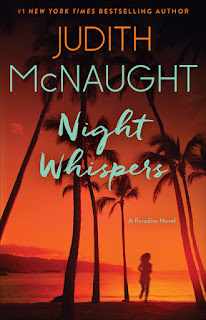 In this “exciting tale of loyalty, love, and danger” (Publishers Weekly), Sloan Reynolds, a small-town Florida policewoman, knows that her modest upbringing is a long way from the social whirl of Palm Beach, the world inhabited by her father and her sister, Paris. Total strangers to Sloan, they have never tried to contact her—until a sudden invitation arrives, to meet them and indulge in the Palm Beach social season. Reluctant to accept the long-overdue familial gesture, Sloan is convinced to visit when an FBI colleague informs her that her father and his associates are suspected of fraud, conspiracy, and murder. The only catch is she must hide her true profession from her family. Sloan is on top of her game until she meets Noah Maitland, a multinational corporate player and one of the FBI’s prime suspects. She finds herself powerfully attracted to him, against her deepest instincts. When a shocking murder shatters the seductive facade of the wealth and glamour surrounding her, Sloan must maneuver through a maze of deceit and passion in this superb and enthralling tale of breathtaking suspense. 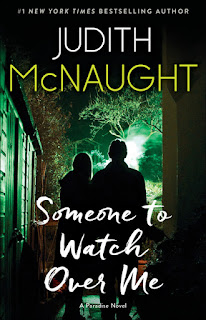 Leigh Kendall is relishing her stellar Broadway acting career in her marriage to Logan Manning, scion of an old New York family, when her husband finds the perfect mountain property for their dream house. But while driving upstate on a winter’s night, Leigh is run off the road in the midst of a blinding blizzard. When she awakes in the local hospital, seriously injured, the police inform her that her husband has mysteriously disappeared, and Leigh becomes the focus of their suspicions. The more she discovers about her husband and his business affairs, the less she realizes she knew about Logan Manning. Now, Leigh is heading deeper and deeper into unknown territory—where friends and enemies are impossible to distinguish, and the truth becomes the most terrifying weapon of all in this thrilling tale filled with unrelenting suspense, unforgettable characters, and powerful traces of greed, ambition, and desire. 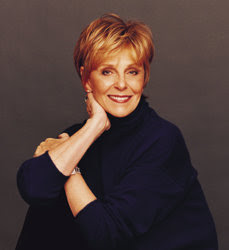 Judith McNaught is the New York Times bestselling author who first soared to stardom with her stunning bestseller Whitney, My Love, and went on to win the hearts of millions of readers with Once and Always, Something Wonderful, A Kingdom of Dreams, Almost Heaven, Paradise, Perfect, Until You, Remember When, Someone to Watch Over Me, the #1 bestseller Night Whispers, and other novels. There are more than thirty million copies of her books in print. She lives in Houston. Please visit her at JudithMcNaught.com and on Facebook at AuthorJudithMcNaught.