The Infinity of You & Me by J.Q. Coyle 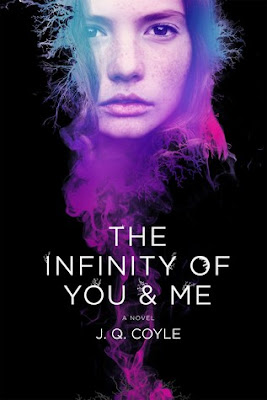 What if every life-altering choice you made could split your world into infinite worlds?

Almost fifteen, Alicia is smart and funny with a deep connection to the poet Sylvia Plath, but she’s ultimately failing at life. With a laundry list of diagnoses, she hallucinates different worlds—strange, decaying, otherworldly yet undeniably real worlds that are completely unlike her own with her single mom and one true friend. In one particularly vivid hallucination, Alicia is drawn to a boy her own age named Jax who’s trapped in a dying universe.

Days later, her long-lost father shows up at her birthday party, telling her that the hallucinations aren’t hallucinations, but real worlds; she and Jax are bound by a strange past and intertwining present. This leads her on a journey to find out who she is while trying to save the people and worlds she loves. J.Q. Coyle’s The Infinity of You & Me is a wild ride through unruly hearts and vivid worlds guaranteed to captivate.

Thankfully, I eventual was able to wrap my head around what was happening and the book become more enjoyable after that. Even though it was confusing at first, I thought the sci-fi world that the author created in this book was very interesting. I would really like to read another book in this world just to discover more about the sci-fi aspect of this book.

The romance was lack lust in my opinion. I was excited for the romance that was hinted at the in the synopsis, but it fell flat in my opinion. Jax and Alicia barely interacted and they seemed like they were in love? It just didn't add up for me. I felt like they would have made a good couple, but their romance just wasn't paced right.

Alicia was hard to connect to at times because she felt very cut off and unemotional. However, I thought she seemed quite mature considering how young she was. I admired that about her. The character I liked the most was Hafeez. He was the best part of the book! I would love to have a book just focused on him!

Overall, I thought this was a creative and unique book. I would recommend this book to someone who is looking for a new and interesting YA novel. I look forward to seeing what the author comes out with next!

3 / 5 Fangs
*This ebook was given to me in exchange for an honest review. *
Posted by MissDaemon at 8:00 AM