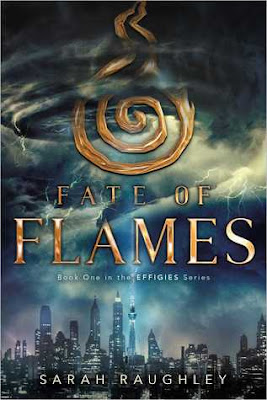 Four girls with the power to control the elements and save the world from a terrible evil must come together in the first epic novel in a brand-new series.

When Phantoms—massive beasts made from nightmares and darkness—suddenly appeared and began terrorizing the world, four girls, the Effigies, each gained a unique power to control one of the classical elements: earth, air, fire, and water. Since then, four girls across the world have continually fought against the Phantoms, fulfilling their cosmic duty. And when one Effigy dies, another girl gains her power as a replacement.

But now, with technologies in place to protect the world’s major cities from Phantom attacks, the Effigies have stopped defending humanity and, instead, have become international celebrities, with their heroic feats ranked, televised, and talked about in online fandoms.

Until the day that New York City’s protection against the Phantoms fails, a man seems to be able to control them by sheer force of will, and Maia, a high school student, unexpectedly becomes the Fire Effigy.

Now Maia has been thrown into battle with three girls who want nothing to do with one another. But with the first human villain that the girls have ever faced, and an army of Phantoms preparing for attack, there isn’t much time for the Effigies to learn how to work together.

Can the girls take control of their destinies before the world is destroyed forever?

Fate of Flames started off with a bang. From the first chapter, I was captivated by the world the author created. I will admit that the world building was a little weak, so it was hard to understand some of the aspects of the world. The author included some much-needed information as the book went on, so that helped me understand what was going on. However, I do still feel like there are some unanswered questions about the world and the Effigies that I hope will be addressed in the next book. I am looking forward to learning more about the world and understanding it more.I liked the main character, Maia. I liked that she was the quieter girl of the bunch, but made sure to stand up for herself. She has some sassy comments that had me laugh out loud. As a whole, I really enjoyed all of the characters. The girls in this book were all diverse and unique. They made an awesome team, and I loved how their differences seemed to make them stronger. At times, the characters got on my nerves due to rudeness or brattiness, but I still liked them by the end of the book. I am so excited for the girls to bond even more and become an unbeatable team. Rhys was one of the male characters and I really liked him. I feel like there is a lot to him that Maia doesn't know yet, so I am very interested to see those questions addressed in the next book. The action scenes in this book were so awesome. The girls were so kick-ass, and I loved the moments where they got to really showcase that side of them. This book made me want to jump for joy with all of the girl power and diversity the author incorporated into the story.

Overall, I thought this was an entertaining and intriguing book. I am looking forward to the next book so my burning questions that were left unanswered can finally be addressed! I would recommend this to anyone who is looking for a YA sci-fi/fantasy novel about kick-ass girls!