The Woman in Black by Kerry Wilkinson 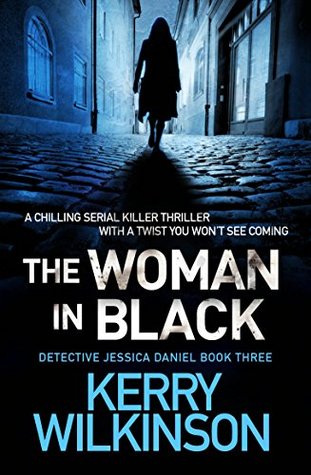 A severed hand is discovered in the centre of Manchester and the only clue Detective Sergeant Jessica Daniel has to go on is CCTV footage of a woman in a long black robe placing it carefully on the ground.

With a growing missing persons list and frantic families wondering if the body part could belong to their absent loved ones, Jessica must solve the case fast.

When a second hand is found and a local politician’s wife goes missing, Jessica is left struggling to find out who the appendages belong to. The mother of missing Lewis Barnes, is convinced his girlfriend, twenty-six year-old January Forrester is responsible, but something doesn’t add up. Who is the mysterious woman in black and how is she connected to the abandoned body parts?

Then, unnervingly, a detached finger arrives in the post for Jessica - and it's clear that someone knows exactly who she is.

A totally gripping and chilling thriller that will have you completely hooked to the very last page.

I couldn't wait to start this one. I finished Vigilante and I wanted to know what was next for Jessica Daniel.

Almost a year has gone by and now Cole is Jessica DCI. Jessica doesn't know if having him as her boss is a good thing or not since he knows her too well. Jessica also has a new detective to share her office with and of course, right from the start, Jessica says something she shouldn't which makes working in the same office very tense. Mostly, Jessica tries not to be at her office and she works with David and a new recruit Izzy.

When a severed human hand is found in a very public place and soon after a finger is delivered to the police station, Jessica and her team become the lead investigators while the rest of the force is busy looking into the disappearance of a local MP’s wife. The only clue they have is from a video from a CCTV camera where a woman wearing a black cape is seen leaving the hand behind. When more severed hands start appearing and mail with more fingers are delivered to Jessica, she knows she has to find the links between the missing people and the severed hands popping out all over the city before more people die.

One thing I'm enjoying about this series is how the characters have grown. Jessica and Caroline seem to be gradually be working back into their friendship. Caroline has even named Jessica her bridesmaid! Dave Rowlands usually delivers great humor but he's also more mature and a very good detective. I'm still not sure if he has a romantic role but he certainly gets along well with Jessica. Cole as Jessica's boss couldn't be better. He let's her be. He trusts her too. He doesn't micromanage her. Izzy was a great addition to the team. She has some of the same spark Rowlands has but it's nice for Jessica to have another girlfriend. Hugo is still a mystery to me. He's in a way an adorable enigma.
I was hoping for some Adam confrontation but sadly there was nothing about him. I'm still hopeful.

The other positive about the story was the detective work per se. I like how the link between victims was established. I enjoyed the twist too.