She thought her story was over.

Little did she realize, it had just begun.

Filled with action, romance, and an adventure that will keep readers on the edge of their seat…What will the fate of the world be as it balances on the tip of one girl’s arrow? Get ready to fly and fall in love with UNBREAKABLE! 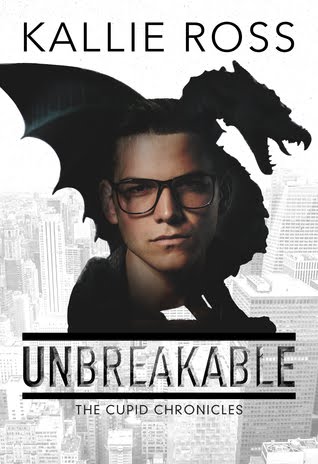 Dying for the love of your life...

Evelyn Bowden thought her story was over. Little did she realize, it had just begun.
The heavens made her a Cupid-- a supernatural with the rarest ability. One that allows her to pierce both mortals and immortals with arrows possessing everlasting love. But Evelyn soon discovers Cupids fight a battle in a long fought war.

A duty to protect the purest form of love…

As Evelyn embarks on her first mission, helping a Gargoyle find his true love, she is exposed to the blurred battle lines between light and darkness. While an unknown threat proves it’s willing to do anything to get their hands on Evelyn and her arrows, the heavens send Andel Lambros to help protect her. She finds herself at risk of being distracted by her former mentor, Andel, a stunning Cupid with dimples hard to ignore.

Missing her mark could lead to a supernatural war…

Having no idea how powerful she is, Evelyn is forced to put everything on the line as she balances the fate of the world on the tip of her arrow. But will love conquer all once she hits her mark, or will all be lost in the end? 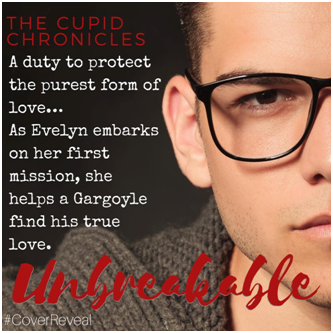 “Don’t make this all about you.” Evelyn shoved another spoonful of ice cream in her mouth.

“Don’ ge meh wrong, ihithabouoo. Buh—” Swallowing down her bite, Evelyn squinted her eyes shut and placed a hand on her temple. “Brain freeze,” she explained, standing and walking to the kitchen.

Andel’s head tilted to one side as he watched her throw the empty cardboard container away. Roscoe would be showing up for his dating lesson soon, and Evelyn needed to compartmentalize so she didn’t end up taking her frustration out on the Gargoyles.

“I’m sorry, Evelyn. Whatever I’ve done to upset you, please forgive me.”

Her spoon clanged in the sink, “How about I’ll forgive you if you tell me what you did wrong?”

Evelyn made her way back to the couch, laying herself across the cushions like she needed therapy.

“I’m fairly sure you are upset I scheduled dinner with Jane and Kendrick during Roscoe’s first date.”

Her pastry slip was proof enough of her anger, but she’d remained in control of her volume. Andel hadn’t asked Evelyn what she wanted to do during Roscoe and Sydney’s date. And after her surprise visit from Kalan, her nerves were fried. Evelyn wanted to be able to make the call for herself as far as where she’d be tomorrow night. She also wanted to decide for herself if she’d give the fairies her arrows. Maybe she’d keep her run-in with Kalan to herself for now.

“You have her number?” Evelyn sat up and narrowed her eyes. She shook her head, clearing it. Why should Andel having Jane’s number matter? “No. Don’t cancel it. It was hard enough to convince her to come in the first place.”

“Yes,” Evelyn grumbled as she went to answer the door. Roscoe’s arrival would at least keep Andel from asking any more questions. She could tell he had picked up that something else was bothering her, but luckily, she had planned Roscoe’s dating lessons for after work.

As Roscoe and Leo entered the apartment, Andel made himself scarce and took a seat in a chair at the edge of the room. Roscoe wore snappy attire, including a bowtie, while Leo had pushed the sleeves of his Henley up to his elbows. The two were complete opposites. Leo had made himself comfortable on the couch, and Roscoe stood at the window waiting for instructions.

“I’m glad you came, Leo. I may need your help tomorrow night.” Evelyn stood next to Roscoe.

“You’ll be on awkward-moment patrol.” She patted Roscoe’s shoulder. “Now that I think about it, this will be perfect. You can circle overhead and stay out of sight, but if Roscoe needs help, you can run interference.” Leo’s eyes widened in excitement. “Not literally, but, you have super-hearing, right?”

“If you hear or see anything going wrong, you can come get me.”

A grin spread over Leo’s face. “Considering who we’re talking about here,” Leo waved in Roscoe’s direction. “What constitutes wrong?”

“We’ll work on identifying that as we go, so pay attention.” Evelyn faced Roscoe and reached up, tucking a piece of his curly hair behind his ear, but Roscoe flinched.

“Relax.” Evelyn stepped closer. “You’re going to have to get used to being close to Sydney. If she’s like every other girl on the planet, she’ll want you to hold her hand and put your arm around her.”

Evelyn let her arm brush against Roscoe’s. He sucked in air but didn’t budge. He froze. Evelyn couldn’t let Roscoe fail. She had started to like him. She wanted him to find love. She wanted Sydney to find love, too, and if it happened to be with Roscoe, then, bonus. She’d do everything in her power to help them have the chance they deserved.

Roscoe relaxed his fists at his sides. “Okay, I’ll work on that.”

“Good.” Evelyn ran her finger slowly down Roscoe’s arm. “How about we start with the end of the date, then?”

Leo whistled, and in the corner of Evelyn’s vision, she noticed Andel shift in his chair. She wasn’t really going to do anything, but if Roscoe had really loosened up, he wouldn’t curl up into the fetal position when they addressed a good night kiss.

Unbreakable was a fun, entertaining, and unique book. I thought Kallie created a very interesting world that I was dying to learn more about! I haven't read any books before about cupids, so I thought the concepts of cupids and even gargoyles was very captivating. The characters in this book were charming and loveable. Andel was one of the major characters of this book, and he made me swoon so many times. Andel was kind, considerate, romantic, and protective. I like him as soon as he was introduced in the book. I am so excited to see more of him in the next book! The main female character, Evelyn, was great. Evelyn was compassionate and dedicated. I also enjoyed her sense of humor! Some of her jokes and sayings seemed a little immature, but I appreciated that she was trying to lighten the mood. I hope that Evelyn will be a little more mature in the next book.I thought the romance in this book was predictable, but still very sweet. I was shipping Andel and Evelyn from their first interaction! I thought they made a very cute couple. I am interested to see how their relationship will develop in the next book. I hope that their relationship continues to develop positively because my heart would break if they don't end up together! The plot of this book was entertaining. I enjoyed going on this journey with Eveyln and Andel. I definitely did think there were some slower parts of this book that had me craving some more action. However, thought the author did a pretty good job with pacing overall. I am looking forward to seeing how the events of this book will effect Eveyln and Andel in the sequel. Overall, I thought Unbreakable was an enjoyable read. I think this is a promising start to a new YA series. I am looking forward to reading more books by this author! 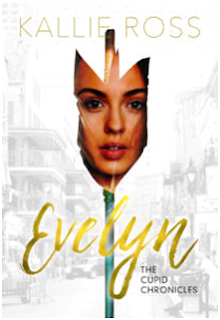 Evelyn Bowden, at nineteen, sacrificed herself for the love of her life. Her act inspired the heavens to deem her immortal as a Cupid. Piercing two hearts with true love takes more than a bow and some arrows. That’s where AndelLambros comes in, he’s a handsome, experienced Cupid in charge of her training. While trying to prove herself worthy, Evelyn is challenged to deliver her first arrow, let go of her first love, and trust her mentor with her existence.

Kallie Ross has a passion for writing that has become an adventure in itself. She desires to create unique young adult fiction that incorporates legend, conjecture, fantasy, and conviction.
In addition to loving her life as a writer, Kallie adores being a wife, mother, friend, and teacher. She began her creative journey with books, a blog, podcast, and lots of caffeine. Ross never imagined her own adventure would be filled with so many wonderful people or words!