The Earl by Katharine Ashe

How does a bookish lady bring an arrogant lord to his knees? Entice him to Scotland, strip him of titles and riches, and make him prove what sort of man he truly is. Opposites… Handsome, wealthy, and sublimely confident, Colin Gray, the new Earl of Egremoor, has vowed to unmask the rabble-rousing pamphleteer, Lady Justice, the thorn in England’s paw. And he’ll stop at nothing. Attract. Smart, big-hearted, and passionately dedicated to her work, Lady Justice longs to teach her nemesis a lesson in humility. But her sister is missing, and a perilous journey with her archrival into unknown territory just might turn fierce enemies into lovers. 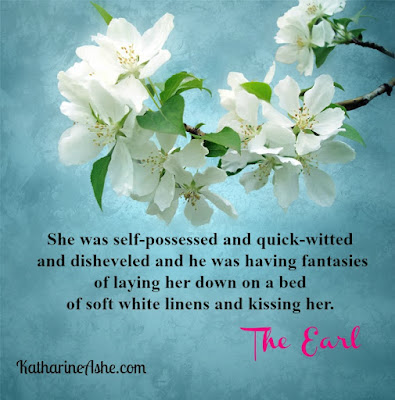 Zenobia was at her writing desk, quill between fingers more accustomed to pen than sewing needle,    spectacles perched on the bridge of her nose, and head bent to her latest pamphlet when, in an ominous  voice, Franklin announced, “The Earl of Egremoor.”

Twitching a blank sheet over her work, she arose.

There in her parlor doorway he stood, dwarfing her footman. Color from the brisk day without dusted his cheekbones, but otherwise he was exactly as he had been in Edinburgh months earlier: elegant, understated, and utterly perfect. From his cravat carved of Italian marble to his boots that shone like the blade of a sword, there was no hue that jarred or angle that displeased. Motionless and severe and entirely focused on her, he was a strong, magnificent creature of impeccable noble blood surveying her like a hawk hunting from far above and judging her paltry prey.

An unnerving silence stretched across the room. That he did not speak at once buoyed her courage; he must be at least as unhappy as she with this meeting.

“You needn’t have come,” she finally said. “I would have been content with a letter from your secretary.”

It could not be a smile causing the slight shadow about his mouth. This man did not smile. He bowed gorgeously, however, without excess or flourish but with glorious control. The hat and riding crop still in his grasp were props to reveal the sinews and long fingers of his hands, and they made it clear that he did not intend a lengthy call.

“Good day, my lady.” His voice was as smooth and deep as it had been in Scotland in the spring when he had barely spoken to her despite their attendance at the same wedding. “I trust you are well?”

“Oh, please,” she said crisply. “You don’t care if I am well or not. And I don’t care for empty social conventions, so let us dispense with small talk. I have heard about your father’s death and I am very sorry. You have my sincere sympathy.”

“Do I?” He moved into the parlor and she had the most disturbing impulse to seize a fireplace poker and brandish it. But he halted in the middle of the room.

Something sharp flashed in his eyes and she felt it in her stomach like a little shock.

“I have only just arrived,” he said.

“And that is really about all of this call I can bear,” she said. “Good day, my lord.”

He said it unremarkably. But the sound of her name upon his tongue did something horrible to her insides: it twisted them into a knot of very old and unwanted pain.

“I go by Zenobia,” she said before he could continue. “For several months now.”

“I see.” He advanced another step.

“Halt.” She thrust out her palm. His eyes were the most beautiful shade of blue, so dark, and so familiar. At one time she had thought that the warmest smile in the world rested in those eyes. “I have offered my sympathies and said good-day, and truly I meant both.” She was not, after all, a woman to fall to pieces over a pair of dark eyes. “Please go.”

“I cannot yet.” His jaw was just as Clarice and Shauna rhapsodized: taut and handsome and at this moment engaged in an intriguing little dance of muscular tension. “I must say something first.”

She frowned and tried not to stare at the flexing muscle. “Say it, and then leave.”

His shoulders seemed to set even more firmly in place. “My lady,” he said in quite a fearsome voice, “will you do me the honor of becoming my bride?”

For all of his experience in cowing people he wished to cow, Colin had never actually seen the color drain from a person’s face as swiftly and entirely as it now did from Emily’s. If he needed confirmation that she had dreaded this moment, here it was in the parchment white of her cheeks and brow. Even her lips paled—admirable lips, pink and shapely and formed to suggest laughter rather than the astonishment that parted them now. Her eyes widened too, brilliant emerald behind lenses of gold-rimmed spectacles. Her chin was a pixie’s, not soft and rounded but slightly sharp, and her features fine. Her hair had not changed in twenty years, except that now the pale wisps were confined in a simple queue rather than tangled with pine needles and mismatched ribbons. Dressed soberly in muted blue, she was the portrait of a reclusive maiden and clearly astonished, and he had never so powerfully wanted an interview to end quickly.

“You have got to be jesting,” she said into the thick silence.

“Well then, you have gone mad.”

“Oh.” A delicate V darted the bridge of her nose above the gold wire. “You are required to offer for me, aren’t you? By the terms of your father’s will.”

She was intelligent and perceptive, and forthright in a manner that would embarrass most other women. She hadn’t a care for what others thought of her. She never had.

“I am,” he said because he had always been honest with her. Except once.

“You needn’t have come here. You might have written to my father at Willows Hall.”

“The will specified the manner in which I was to make the offer.”

“Did it? How loathsome of your father.”

He found the unprecedented need to clear his throat. “I am also required to await your response.”

“This could not be more idiotic, could it? No, I won’t marry you. Now you can leave.” She turned to her desk, then looked over her shoulder, her lashes spread wide. “You are not actually required to marry me in order to inherit Maryport Court, are you? That could not possibly be legal. The estate is entailed.”

He actually felt his spine stiffen, the vertebrae aligning in a perfect column.

“Why?” He should leave. Immediately. Before he said something he would regret. “If I were, would your answer differ?”

“Of course not.” She paused and alarm sparked in the candid emeralds. “Is it the case?”

“No.” But the requirement that he marry her in order to maintain control of extensive unentailed properties in the West Country, as well as his mother’s jewels, was. “You are correct. The estate is bound to the title.”

“That must be a relief for you,” she said, turning her back to him again and sitting before a small writing table. “I would not have wished you to be separated from all you hold dear.” She reached for a pen. “I imagine the stipulation, even as it is, could not be held up to law. You might have contested it.”

“I chose not to.” To protect the privacy of their parents’ agreement. To protect his privacy. And hers.

“Well, now your devotion to duty is satisfied.” She dipped the pen in ink. “Good day.”

A hard, hot discomfort settled between his ribs. He was unaccustomed to being dismissed. And, for all that he had not looked forward to this meeting, he had not wanted it to go quite like this.

“Good-bye, Emily,” he said to her straight shoulders and glossy hair.

She did not reply or even lift her head. He turned to the door and for the last time walked away from the girl who had once been his best—his only—friend.

Lady Constance Read is independent, beautiful, and in need of a husband—now. The last man on earth she wants is the rogue who broke her heart six years ago, never mind that his kisses are scorching hot… Evan Saint-André Sterling is rich, scarred, and finished with women—forever. He’s not about to lose his head over the bewitching beauty who once turned his life upside down. But Constance needs a warrior, and Saint is the perfect man for the job. Only as a married woman can she penetrate Scotland’s most notorious secret society and bring a diabolical duke to justice. When Constance and Saint become allies—and passionate lovers—he’ll risk everything to protect the only woman he has ever loved.

Katharine Ashe is the award-winning author of historical romances that reviewers call “intensely lush” and “sensationally intelligent,” including How to Be a Proper Lady, an Amazon Editors’ Choice for the 10 Best Books of the Year in Romance, and My Lady, My Lord and How to Marry a Highlander, 2015 and 2014 finalists for the prestigious RITA® Award of the Romance Writers of America. Her books are recommended by Publishers Weekly, Women’s World Magazine, Booklist, Library Journal, Kirkus Reviews, Barnes & Noble, and many others, and translated into languages across the world.

Katharine lives in the wonderfully warm Southeast with her beloved husband, son, dog, and a garden she likes to call romantic rather than unkempt. A professor of European History, she writes fiction because she thinks modern readers deserve grand adventures and breathtaking sensuality too. For more about Katharine’s books, please visit www.KatharineAshe.com or write to her at PO Box 51702, Durham, NC 27717. 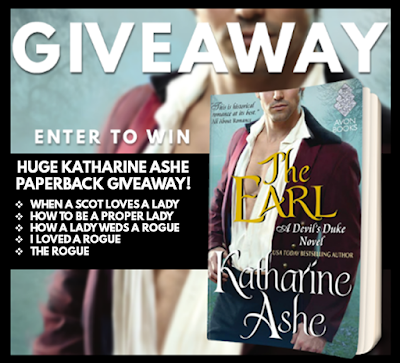