This Is Our Story by Ashley Elston 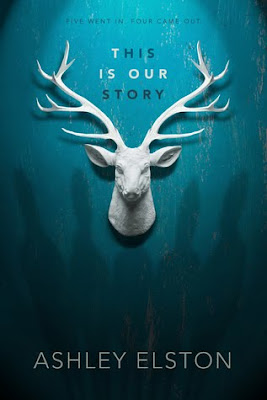 No one knows what happened that morning at River Point. Five boys went hunting. Four came back. The boys won’t say who fired the shot that killed their friend; the evidence shows it could have been any one of them. Kate Marino’s senior year internship at the District Attorney’s Office isn’t exactly glamorous—more like an excuse to leave school early that looks good on college applications. Then the DA hands her boss, Mr. Stone, the biggest case her small town of Belle Terre has ever seen. The River Point Boys are all anyone can talk about. Despite their damning toxicology reports the morning of the accident, the DA wants the boys’ case swept under the rug. He owes his political office to their powerful families.Kate won’t let that happen. Digging up secrets without revealing her own is a dangerous line to walk; Kate has her own reasons for seeking justice for Grant. As she and Stone investigate—the ageing prosecutor relying on Kate to see and hear what he cannot—she realizes that nothing about the case—or the boys—is what it seems. Grant wasn’t who she thought he was, and neither is Stone’s prime suspect. As Kate gets dangerously close to the truth, it becomes clear that the early morning accident might not have been an accident at all—and if Kate doesn’t uncover the true killer, more than one life could be on the line…including her own.

This Is Our Story was one of those books that sucked me in with the first sentence and didn't let me go until the last sentence of the book. I was completely enthralled with this book, and I couldn't stop reading it. The plot was consuming and addictive throughout the entire story. Whenever I thought I had things figured out, the author would throw in a curve ball that had me re-thinking everything. The mystery was so fascinating and I was on the edge of my seat trying to figure out what happened. My first guess in the beginning of who the killer was was actually correct, but I changed my mind multiple times throughout the book because the author constantly kept me on my toes. I never knew what to expect and who I could trust!

The main character, Kate, was terrific. I connected with her right from the beginning. I loved how dedicated she was to figuring out the truth behind the mystery. She wanted justice and I admired how hard she fought for that. She didn't necessarily think all of her plans out before she executed them, but I thought that helped keep the book exciting.

Kate's best friend Reagan was hilarious and so loyal to Kate. I thought Reagan was a great side character and an even better friend. I really liked that the author focused on the strong friendship between the two girls. The group of boys in this book were very intriguing and mysterious. I couldn't help but want to get into their heads just like Kate did. One boy also happened to be very swoon-worthy, but I don't want to spoil anything with that. All I will say is that the romance that was in this book was unexpected but so perfect and sweet. It was a great addition to this story.

The author's writing was extraordinary. I thought the way she formatted this book was so original and refreshing. There were some chapters told from the killer's perspective that were anonymous, which added such a creepy and addictive factor to the story. The ONLY thing I wish this book would have had was little more closure at the end. I love the way the author wrote the ending and wrapped it up for Kate. However, I wish the author would have delved a little more into the reaction of the boys once they discovered who shot the gun. Their thoughts on the reveal weren't really touched on as much as I would have liked. I would love to read a novella about the boys, their thoughts on the outcome, and how they are dealing with it.

Honestly, I could go on and on about this book. The bottom line is: YOU NEED TO GET THIS BOOK ASAP AND READ IT. I will warn you that you need to have an entire free night to read This Is Our Story because I guarantee you will not be able to put it down. This is definitely going to be one of my favorite books of the year. READ IT, PLEASE BECAUSE I AM STILL NOT OVER THIS BOOK AND I NEED TO TALK TO SOMEONE ABOUT IT.

5 / 5 Fangs*This ebook was given to me in exchange for an honest review. *
Posted by MissDaemon at 8:30 AM