With A Twist (Bad Habits #1) by Staci Hart 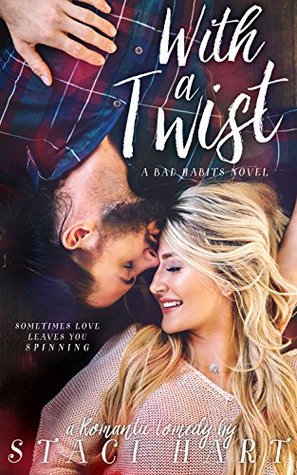 Love is somewhere near the bottom of Lily Thomas’ list of life goals, right next to competitive eating and underwater cave diving. She’s spent six years pirouetting and pliéing her way up the ranks of the New York Ballet with her eye on the prize and love in the back seat. But now that Blane Baker -- Lily’s long time crush -- is finally single, she’ll throw her rules out the window without thinking twice.

Reality with Blane isn’t as epic as the fantasy she imagined, and the truth sends her spinning straight into the arms of the man she never knew she’d always wanted.

West Williams has been friends with Lily since the day she moved into their building and he saved her armoire from a swift, sudden death by staircase. Their friendship has always been easy, the boundaries clearly defined. With neither of them willing to risk their relationship, they’ve drifted happily through the years as companions, never considering more.

That is, until they do. And that realization changes everything.

After seeing this book all over social media I finally decided to purchase it, but ended up never reading reading it and after meeting the author Staci Hart I decided I had no excuse in not picking it up and reading it right away. Well...I could just kick myself for not reading it when I first purchased it because I absolutely fell in love with the story and every. single. character!

This is the first book in the Bad Habits series and it revolves around Lily and West. They are of course best friends and have been so for years. They each start seeing other people and somehow other feelings start to come to the surface, but neither one of them knows what to do with it because they have always been in the friend zone with each other. Lily is seeing Blane who she has been lusting over for years. The only problem is that she built him up so much that he just can't seem meet those expectations and things just don't seem to be working, but hey! Lily isn't anything if not committed so she doesn't give up. West has been having a no strings attached relationship with someone as well but somehow things get complicated, what relationship doesn't. I loved seeing Lily and West struggle with their feelings, I somehow knew that once one of them realized why things weren't working with the others they would figure out that it was because they had feelings for each other. All of the tension that was building up as each chapter passed was perfection! They have these nicknames for each other too! Only best friends are allowed to give you nicknames right? Right! And while Lily and West are figuring out their relationship there is also tension from the secondary characters. Hart is building the other stories from the beginning and it just adds so much more excitement into the mix. These friends laugh at each other, piss each other off, but in the end they are there for each other no matter what comes their way. One of them even works as a bartender at a bar called Habits and that seems to be their go-to place for meet-ups, so you can only imagine the shenanigans.

This series started off with a very strong start and has made me an instant fan of Staci Hart. I have a feeling that she's going to be one of my go-to authors. I just love finding new authors that make me fall head-over-heels in love with their characters and Hart has without a doubt done it!

So lets recap, super sexy man-bun, hilarious banter, super adorable nicknames like LumberWest and Twinkle Toes, plenty of strong alcohol, and a tight knit group of friends that makes me jealous they're fictional! Does that sound like something you might be into reading? You should be shaking your head yes and one-clicking the crap out of this book, you'll thank me later.