Most Wanted
by Lisa Scottoline 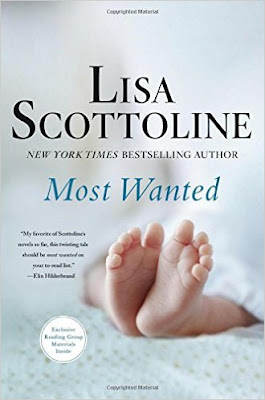 
Lisa Scottoline delivers another searing, powerful blockbuster novel that explores hot-button issues within the framework of an intricately plotted thriller. When a woman and her husband, desperate for a baby, find themselves unable to conceive, they decide to take further steps. Since it is the husband who is infertile, the heroine decides to use a donor. And all seems to be well. Three months pass and she is happily pregnant. But a shocking revelation occurs when she discovers that a man arrested for a series of brutal murders is her donor - the biological father of the child she is carrying. Delving deeper to uncover the truth, the heroine must face her worst fears, and confront a terrifying truth. Most Wanted is sure to be Lisa Scottoline's most discussed, bestselling novel yet.

Christine and Marcus are finally pregnant from a sperm bank after years of trying. Everything is going perfectly until she catches the breaking news headline on TV. They finally caught the “Nurse Murderer”, and the image of the caught serial killer looks a lot like her donor.

I have to admit that the one word I think of when I try to explain how I feel about this novel is indifferent. From the very beginning I wasn’t addicted to the story, but at the same time I wanted to see where it was going.

Right now there’s the a lot controversy about nurture vs. nature. Are children be born with the serial killer gene? Or does it all revolve around how you raise the child? I find this topic fascinating and I was very excited to see how Lisa Scottoline addressed it. Unfortunately there wasn’t much of that information. Instead it was all about Christine running around trying to figure out if the donor WAS in fact the serial killer.

There were times I cringed at the things Christine chose to do. I felt they were odd and honestly unacceptable in a marriage.

I don’t want to give away anymore of the plot because I don’t want to spoil anyone.
Overall, my feelings for this one remain indifferent. Was it entertaining? Yes. But there was something that rubbed me wrong and kept me from my “gottakeepreadingorelse” mood.

Posted by MrsAlcide at 5:00 AM