Best of My Love by Susan Mallery 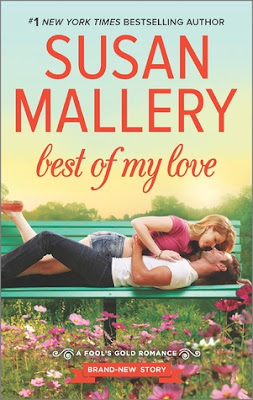 An irresistible new love story from the #1 New York Times bestselling author of the Fool's Gold series, set in a town Library Journal calls "so appealing, readers will want to start scoping out real estate."


To overcome her painful past, baker Shelby Gilmore goes on the hunt for a friend—a male friend—to convince her stubborn psyche that men can be trusted. But where in a town as small as Fool's Gold will the petite blonde find a guy willing to not date her?

Dark, charming Aidan Mitchell puts the "adventure" in Mitchell Adventure Tours…and into the beds of his many willing female tourists. Until he realizes he's inadvertently become that guy—the one-night Casanova—and worse, everyone in town knows it. Maybe Shelby's boy/girl experiment will help him see women as more than just conquests so he can change his ways and win back his self-respect.


As Aidan and Shelby explore the secret lives of men and women, the heat between them fires up the Fool's Gold rumor mill. If no one will believe they're just friends, maybe they should give the gossips something to really talk about!

Books by Susan Mallery are like comfort food. After you are done eating them, you feel happy.
Her Fool's Gold series has amazing characters. There is always humor, romance, great friends and an awesome Major.

I was happy I already knew the MC from prior books.

Shelby Gilmore is part owner of the pastry establishment. She moved to Fool's Gold two years ago after her mother passed away from cancer. Shelby doesn't trust men after years of enduring her father's abuse. She has been through counseling and she decides she wants to start an experiment. She wants to start a friendship with one man, build up trust and, later on after six months, move on with her life.

Aidan Mitchell knows he needs to change. The hooking up with female tourists has to stop. He doesn't like being the bad guy. He agrees to Shelby proposal's because he wants to change. He wants to learn to be a better man.

You can see where this was heading. First comes friendship, then comes loves, then comes the corresponding break up. Even though it's something we have seen before, it still works in this romance.

I believe a new series is beginning since some of the male characters are moving to a different city called Happy Inc.

I'm not sure I'm ready to say goodbye to this series yet.