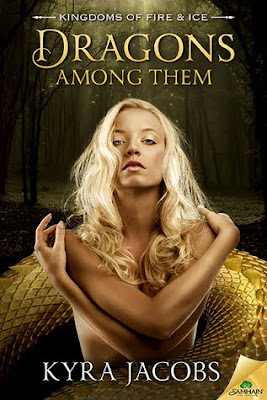 Two secret worlds. One unstoppable passion. A fiery secret that could destroy them all.Prince Zayne Godfrey, heir to Edana’s throne, is betrothed to the lone princess of rival kingdom Forath. While his heart is not in the arranged marriage, he will do his royal duty.When he finds a beautiful stranger cornered by a pack of wolves, he doesn’t hesitate to shift into his golden dragon form to save her. She thanks him by taking one look at him and fainting dead away.Photographer Adelaide Miller is in England for a career-making shoot when a bizarre jogging mishap lands her in a dangerous, medieval-like world of royals, wizards and dragon-shifting men. Her first instinct is to find her way back, but the fire-breathing prince intent on protecting her threatens to melt her heart.Zayne’s burning passion for Adelaide not only jeopardizes the fragile peace between two kingdoms, it uncovers a ruthless plot to destroy his family. Remaining together may change Adelaide’s very definition of home—and expose one searing secret that could forever shift the balance of power in Zayne’s world.

"In a single day, the mysterious woodland nymph had stolen his heart."

So, this book had a major case of insta-love. I am not a fan of insta-love, so I didn't enjoy the romance in this book as much as I wanted to. I think I would have liked this book better if there wasn't insta-love. I think a slow burning romance would have worked a lot better for the plot.
I couldn't believe the romantic connection between Addie and Zayne. They had a ton of chemistry, which lead to some steamy scenes, but I felt like that is all they had. There were some cute and romantic moments between Addie and Zayne, but they were a little hard to believe at times. Most of the "romantic" scenes felt cheesy to me. I hope their relationship develops more throughout the series.
The plot of this book was interesting, even though some chapters dragged a bit. I liked the idea of there being multiple worlds. Zayne's medieval world really intrigued me. I would have liked to learn more about it, because I felt like the world building was kind of lacking. I have a feeling there will be more world building in book two, which I am looking forward to. The aspect of dragon shifters was exciting and unique. I haven't read a lot of books about dragon shifters, so I had fun time reading about that. I would also like to learn more about that in book two. I think the author did a great job of holding my interest in the fantasy aspect of this book.
The characters in this book were fine. I didn't love them or hate them. Addie seemed to be a bit of a Mary Sue, which was a little annoying. Other than that, I had no problems with Addie. She was kind and very thoughtful, which I admired. Zayne was loyal and protective. He definitely made me swoon a few times. However, I didn't think he was extremely memorable. He was your typical alpha male. I didn't dislike him, but he wasn't anything special either. I would like to see some more character development for Zayne and Addie in book two.
Overall, I thought this was a fun read. I wish the insta-love romance wouldn't have been as prominent so there could have been more room for world building. However, the dragon shifter aspect was interesting, and I applaud author for her creativity. I think this is a series that will get better with each book, and I am excited to see that happen.

Email ThisBlogThis!Share to TwitterShare to FacebookShare to Pinterest
Labels: Review Dragons Among Them, Kingdoms of Fire and Ice #1, Kyra Jacobs, Recent Release, Review