Hard Ever After by Laura Kaye 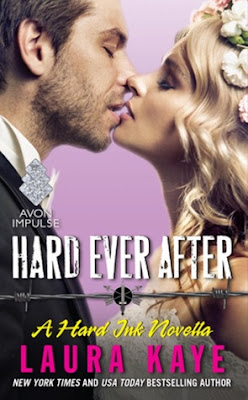 After a long battle to discover the truth, the men and women of Hard Ink have a lot to celebrate, especially the wedding of two of their own—Nick Rixey and Becca Merritt, whose hard-fought love deserves a happy ending.

As Nick and the team shift from crisis mode to building their new security consulting firm, Becca heads back to work at the ER. But amid the everyday chaos of demanding jobs and their upcoming nuptials, an old menace they thought long gone reemerges, threatening the peace they’ve only just found.
Now, for one last time, Nick and Becca must fight for their always and forever, because they know that when true love overcomes all the odds it lasts hard ever after.

I love it when Laura Kaye give us a gift. At least, that's the way I see it.

The Hard Ink series is one of my favorites. It has so many great characters. All of them play a part in the story arc the series had. Ex-military guys wrongly accused who are trying to clear their names and honor and now after everything that went down in the last book, they are finally free to love without thinking they are under attack.

Nick is ready to move forward. He wants Becca in his life permanently and asking her to marry him is the first step in securing a future with her. Nick loves her more than he can say. He can't wait for her to become his wife.

Becca is finally breathing easy. After months of being on leave, she's going back to work and to her routine. Except, now she has a family in the friendships she made while the guys were trying to keep them alive. She couldn't be happier to plan a wedding with the man she loves and having her friends there during that special time with them is just a bonus. That is until a man from her past comes back to haunt her.

Hard Ever After had all the ingredients I have come to love in this series. The great camaraderie from the guys, the great support within the friends, romance, and of course loads of action.

I'm just so happy Laura gave us one more glimpse at this awesome group of people. It is very hard to let them go but seeing them happy is a step in the right direction.