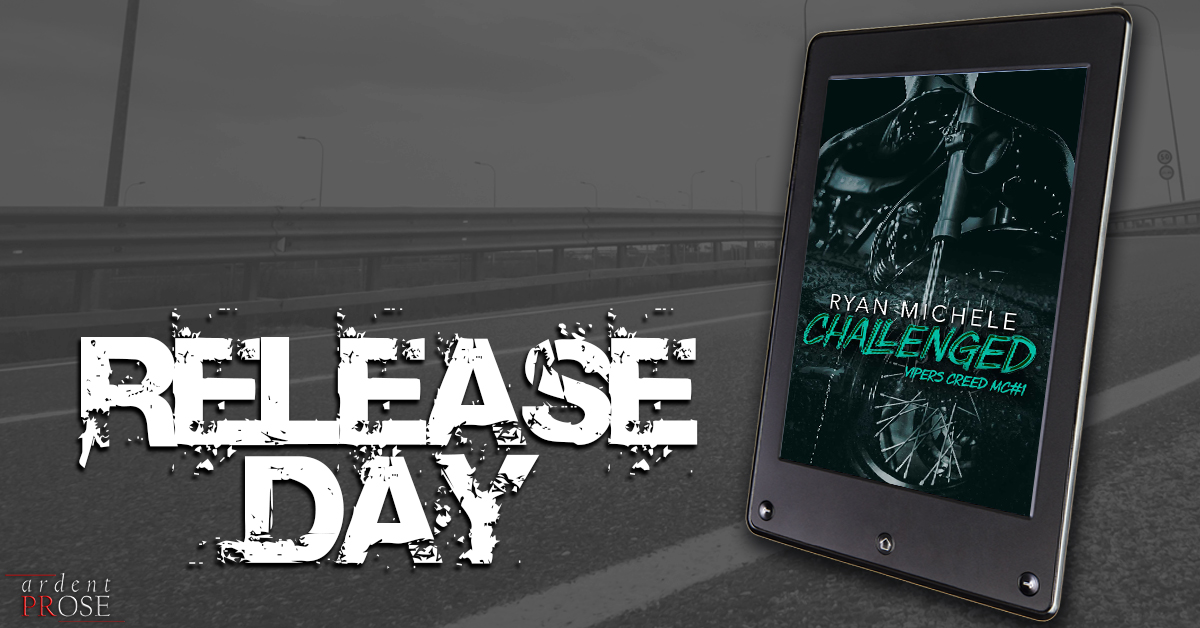 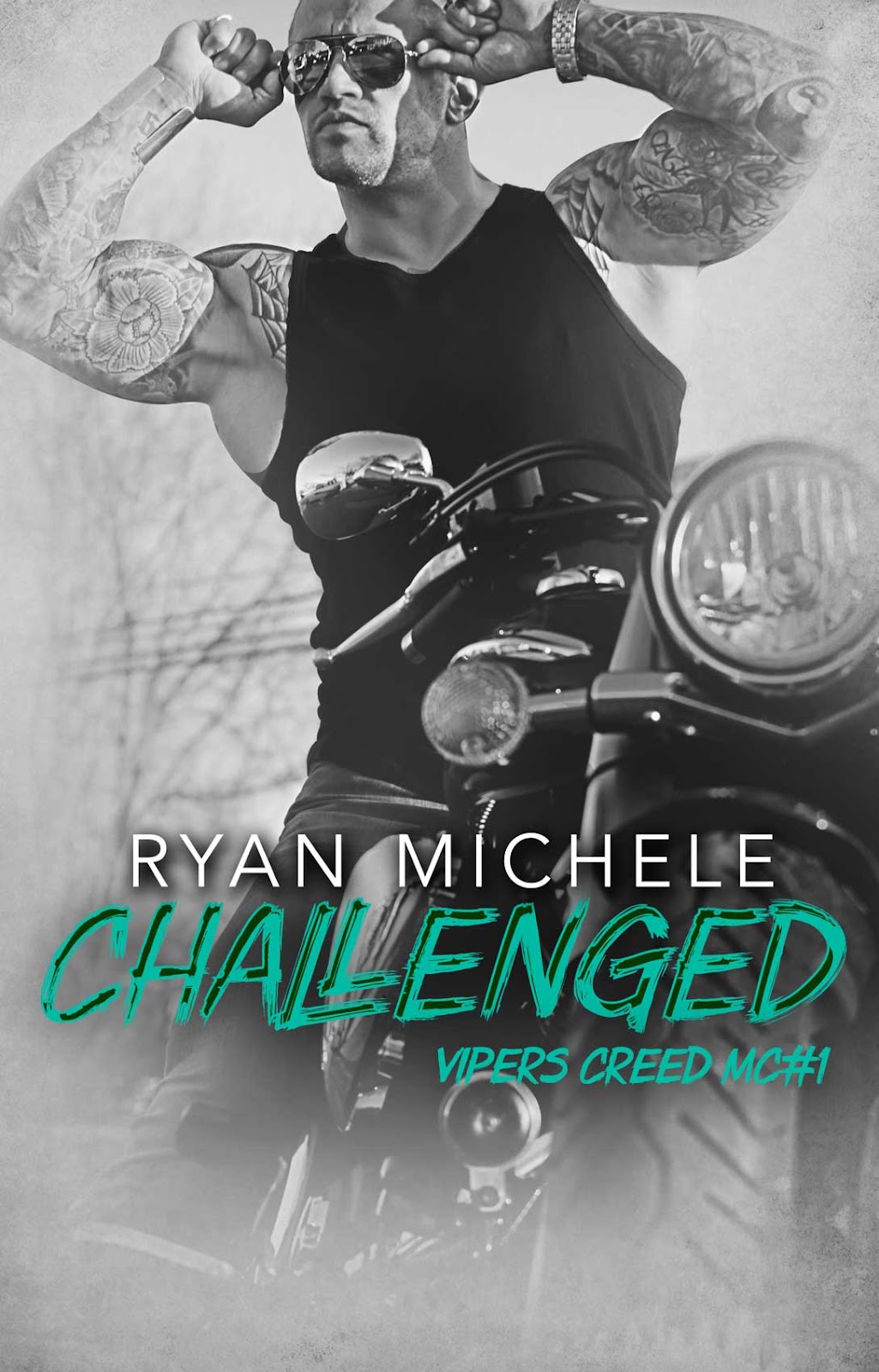 Growing up in the fast-paced and rough life of a motorcycle club wasn’t easy. Cleaning up the mess his father had made of Vipers Creed meant sacrifice. Cade ‘Spook’ Baker had given up everything to bring the club life back to what it was supposed to be: a family.

The choices he made were not what he wanted, but they were necessary for the club as a whole.
Second chances rarely came to Spook, so when his Trixie walked boldly into his clubhouse, the decision was made. Trixie would once again be his, this time for good.

Trix Lamasters was raised by a master—a master con. All grown up, she made her life solid by making it about her club, Sirens. But one bad business decision brought her to her knees, forcing her to call on the one person she had sworn she would never trust again.

Pasts have a way of not staying there. Things that were buried deep have a way of finding themselves in the light of a new day. Could something that had once crashed and burned for Spook and Trixie find a way out of the wreckage? With the odds against them, can they find a way to overcome the challenges, or will it all blow up in their faces?

Order Challenged by 11:59pm on April 8, 2016 and Get an EXCLUSIVE LOOK At Captivate Me the final book in the Ravage MC Series.
Click this link  http://goo.gl/forms/W2hFsn8vrX 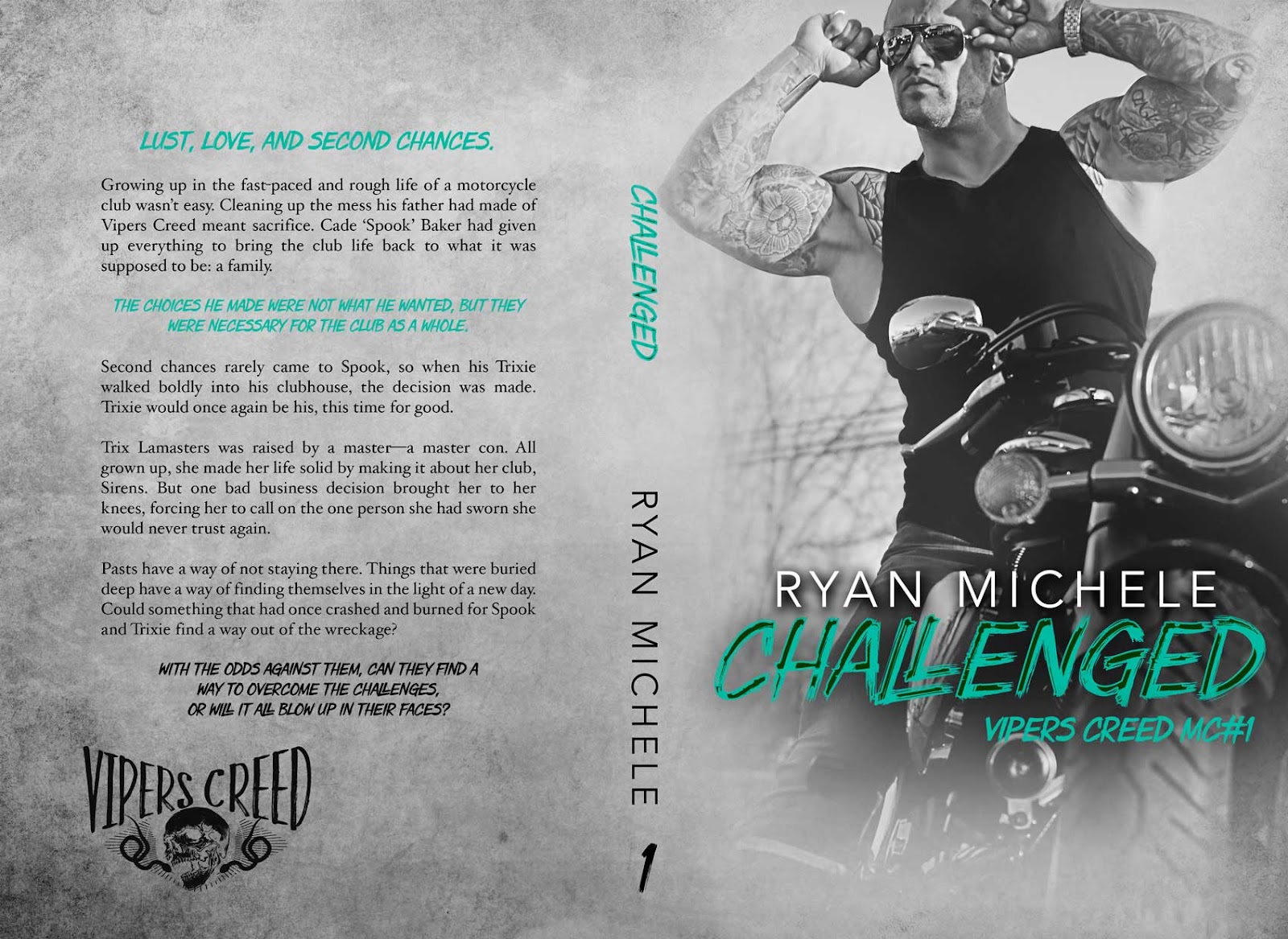 Trix
“You get anywhere with Cade?” Jett, my assistant asked as she plopped down in the chair in front of my desk.  She had a beauty that pulled everyone in and curves that made me insanely jealous. Her long, dark hair laid pencil straight, and her eyes were a blue that looked almost gray in different lights.
My stomach fell at her question, reminding me of last night. I couldn’t believe I fucking slept with him. Not just fucked him, but showered with him, fell asleep with him … woke up in his damn arms. Sneaky bastard.
I could still feel him between my legs. Hell, I even had phantom feelings of him inside of me. He’d had a lot of practice. I knew he had because I had heard all about it. And I wasn’t any better than one of those paid hookers.
Fucking moron. My reasons had sucked before. They meant shit now.
I wanted to pass off the night as being just another booty call, a way to fuck each other out of our systems, but both were a flat out lie. Last night was so much more than anything Taylor, or any of my other weak-ass booty calls, and I had ever been.
The rawness in his eyes captivated me. God, his eyes … I could see so much more in them last night. More than I’d ever thought I would see. But I was just fooling myself. I wouldn’t go back fifteen years to fall for the bad boy again, just to get my heart smashed all over again.
Mortification didn’t even cut it when it came to describing how I felt. Weak. Pathetic. I gave in, letting him have that power over me with his smooth talking and fantastic bed skills.  Plus, he had looked sexy as hell in his leather and jeans. To see him on a motorcycle, too, was just a recipe for disaster. And I had just spread my legs, begging for him to give it to me. Dammit.
Although I was dead serious in the note I left him this morning, it felt really odd to leave it for him in my own house. Nevertheless, I couldn’t stay and deal with the morning after shit. One look and I would have let him inside my body again. I would have let him take me over and over until I really couldn’t walk. Now that I knew how much he had grown, let alone changed in the bedroom, it would be more difficult than ever to say no to him.
I had to remember Cade crushed me. My first love left me to pick up the pieces of my torn heart. I couldn’t go back to the me from that time.
“He doesn’t know if Nanette is there.” I decided to leave out the whole him fucking my brains out bit. I wouldn’t open up that can of worms. I told Jett all about Cade one night after way too many shots of tequila. Regardless, the less people who knew about the now, the better. 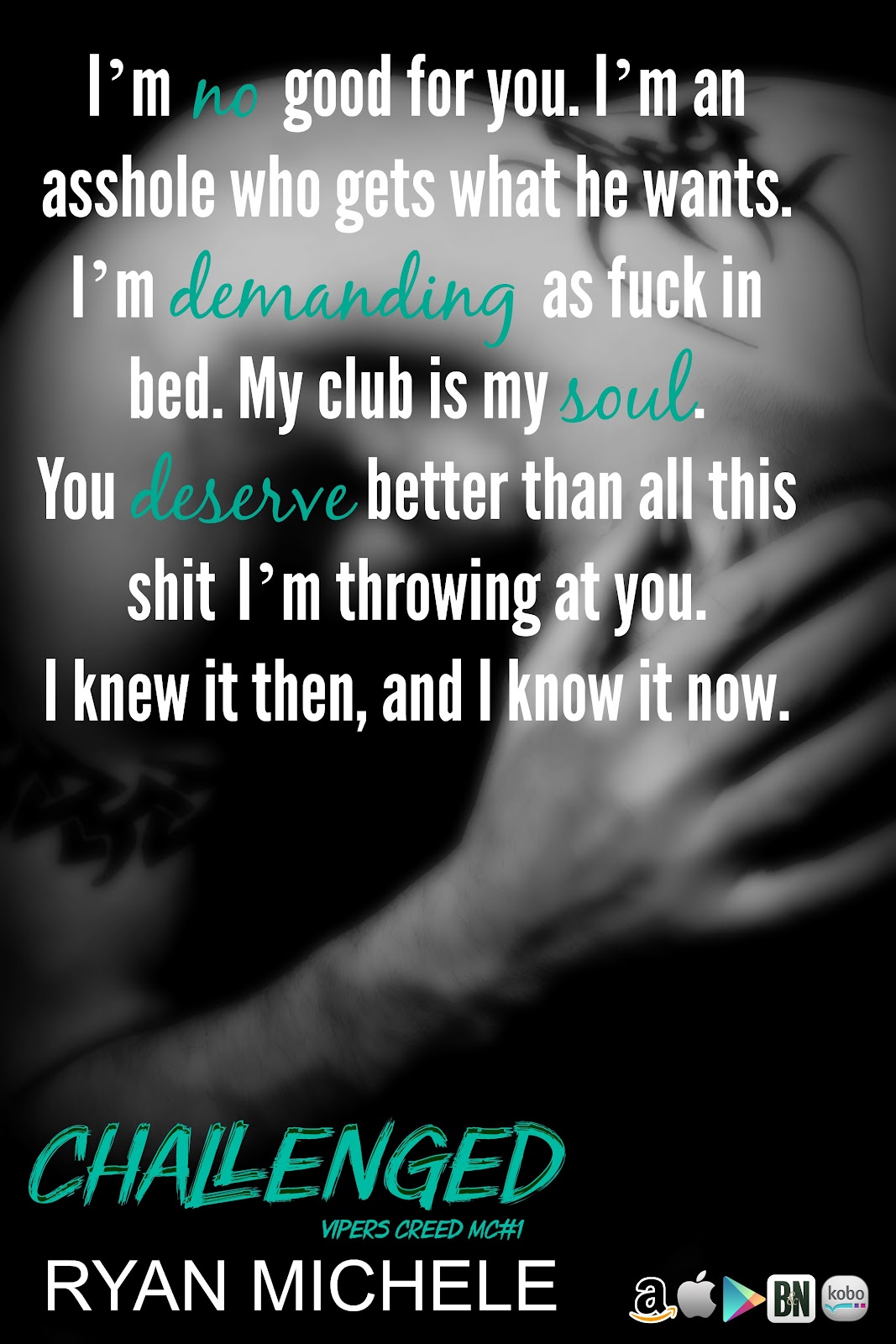 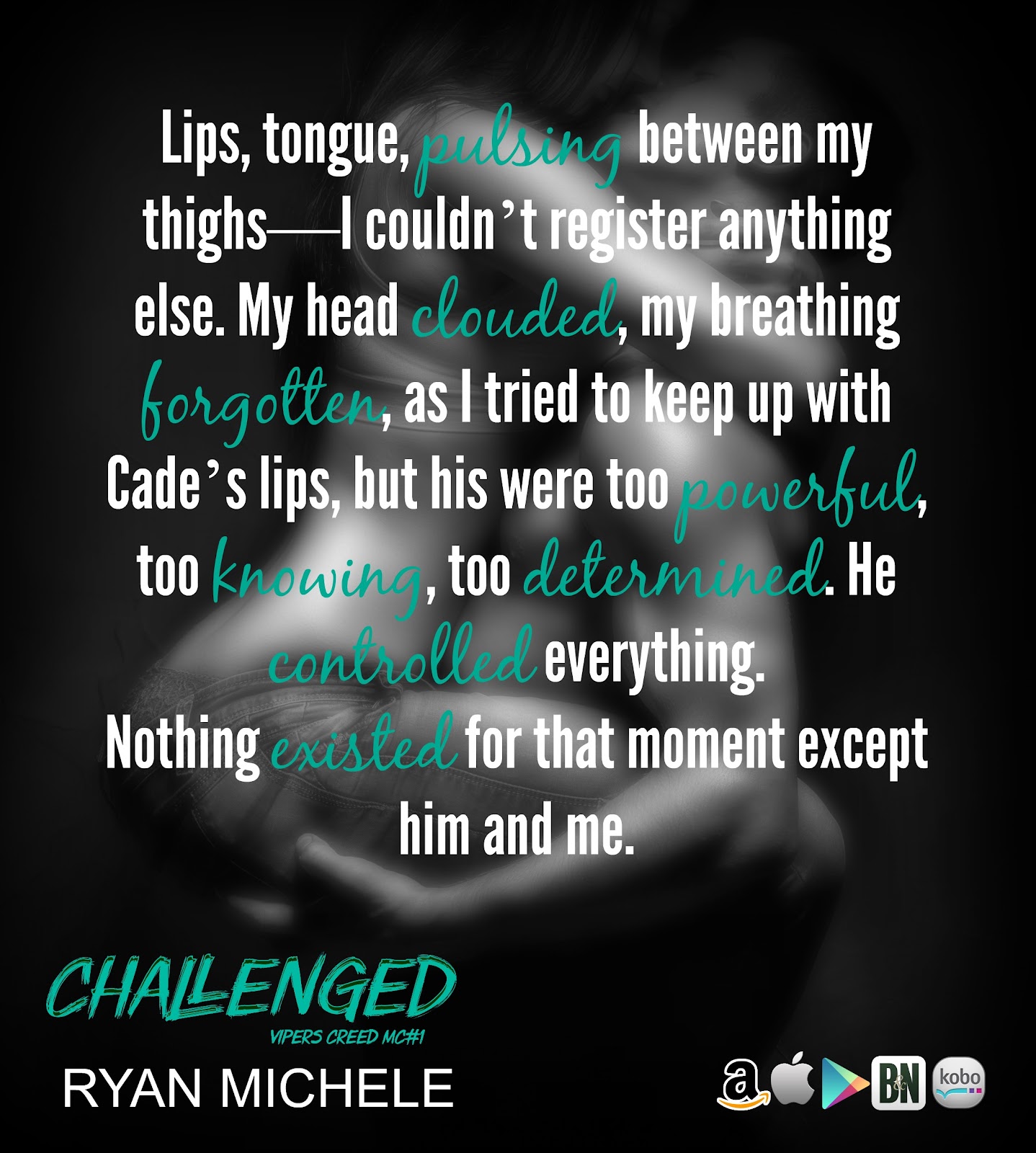 Ryan Michele has a huge obsession with reading, which only came to life after her best friend said she had to read Twilight. After reading that series, her entire world changed in the blink of an eye. Not only was she sucked into new worlds and all of the wonderful words authors put down on paper, she felt the urge to begin to write down the characters that played inside of her head. In doing so, Safe was born. Then Wanting You and the Ravage MC series.

When she's not reading or writing, she spends time taking care of her two children and her husband, enjoying the outdoors and laying in the sun.