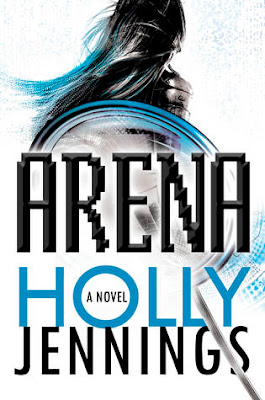 Every week, Kali Ling fights to the death on national TV.
She’s died hundreds of times. And it never gets easier...

The RAGE tournaments—the Virtual Gaming League’s elite competition where the best gamers in the world compete in a no-holds-barred fight to the digital death. Every bloody kill is broadcast to millions. Every player is a modern gladiator—leading a life of ultimate fame, responsible only for entertaining the masses.

And though their weapons and armor are digital, the pain is real.

Chosen to be the first female captain in RAGE tournament history, Kali Ling is at the top of the world—until one of her teammates overdoses. Now, she must confront the truth about the tournament. Because it is much more than a game—and even in the real world, not everything is as it seems.

The VGL hides dark secrets. And the only way to change the rules is to fight from the inside...

Unfortunately, this book didn't capture me like I thought it was going to. I didn't hate this book by any means. I liked it, but it wasn't as awesome as I though it would be. The first couple of pages of this book were really exciting. I was extremely intrigued and I loved the action. However, after that, the beginning portion of this book was really slow. There was some sex, drugs, and drama that honestly bored me. Most of the drama consisted of the team's desired "image" and how they keep the image to please people. I thought it was a boring way to start a book that had such an exciting premise.To be honest, the rest of the book wasn't that much more exciting. I was expecting a lot more gaming and action than there was. I felt like a lot of this book consisted of drama with romance, the team image, teammates not getting along, and drug abuse. Since I was expecting action, this really bored me! The only times I blew through chapters was when it was set in the virtual reality. I wanted more chapters about the actually gaming, because those scenes were great! I though Holly did a fantastic job at creating action scenes that were fun and exciting. Kali, the main character, was a freaking badass when it came to fighting!

Kali annoyed me in the beginning of the book. I had a really hard time connecting with her at first. She was so irritating! I didn't understand her reactions to certain events in the beginning of the book. However, Kali had some fantastic character growth in this book. She turned into a strong and dominant woman. I really admired the journey she went on. She was one kick-ass female.

One thing I didn't like about the writing in this book was that I felt like the author didn't deal with darker subjects really well. Drugs were abused all the time in this book, and I felt like it was so overlooked! Drug addiction and over big issues just felt glossed over. I thought they should have been made a bigger deal.I actually really liked the romance in this book. I was so thankful that the romance wasn't insta-love. I thought the romance was well paced. It was a little cliche, but I liked Rooke and Kali together. They had great chemistry together, and they worked really well together. This book wasn't horrible, but it wasn't fantastic either. It was engaging and the action scenes were a lot of fun. I wish there would have been more action scenes and less drama, because I think I would have enjoyed this book a lot more then. I would be interested in reading more books from this world, and visiting these characters again. I think this book has great potential to become an awesome series. 3 / 5 Fangs*This book was given to me in exchange for a honest review. *
Posted by MissDaemon at 8:00 AM