FOREVER WITH YOU by Heatherly Bell 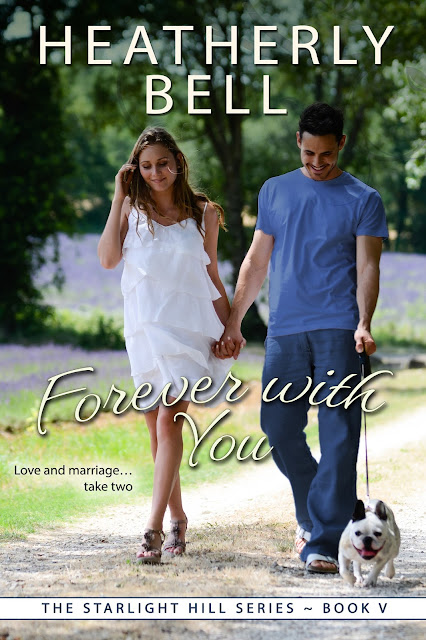 She forgot something on the way to the courthouse …

Sophia Abella has a good life, even if she is a little stuck.  Not quite single, not quite married, she keeps men at a safe distance. But when her ex-Marine husband returns to town and takes the job of chief of police, it might finally be time to get that paper work done once and for all. After all, most of her family already thinks she’s divorced.

They’re not actually, in the fullest sense of the word … divorced.

Years ago, Riley Jacobs chose the Marine Corp over his wife and has regretted his decision every day since. But once a Marine always a Marine, and he’ll use every tactical advantage he has to get Sophia to realize that she’s the only one for him. 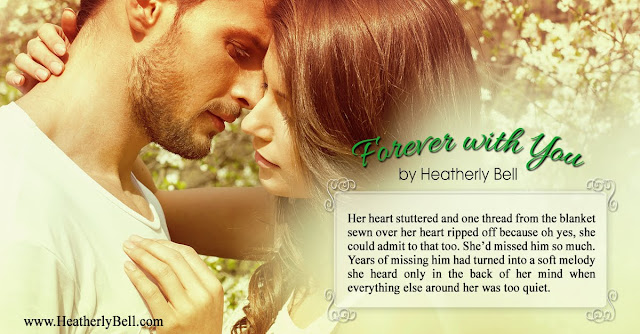 He didn’t answer but only studied her. “Eat.”
She took a bite somewhat automatically and felt immediately annoyed with herself for listening to him. “You’re bad for me.”
What she didn’t say, because she didn’t even want to voice it, was that he’d somehow become nothing but a constant reminder of loss. Pain. Of a fear so overwhelming and raw it threatened to take over everything in its path.
“I’m not. I’m what the doctor ordered.”
“You’re like eating Chunky Monkey every night instead of once a week. Not a good idea.”
He moved closer, so that his shoulder was touching hers. “So what do you want? Vanilla?”
“Not vanilla.” She took another sip, moved her legs and Hershee jumped off her lap, disgusted with Sophia for not sitting still enough for Her Highness. “Maybe Neopolitan. It’s good enough but not so much that I want it every day of the week.”
Riley stood up, took Sophia’s bowl and set it on the coffee table. He pulled her up off the couch, his hands on her elbows. The blanket fell to the ground at her feet. “Admit it. You’d like to have Chunky Monkey every day of the week. And sometimes you catch yourself thinking about it in the middle of the day. Wondering how you could get away with it.”
“Maybe.”
She’d forgotten how perfect it felt to be this close to him, their breathing comingled. Without a doubt, she’d once known he would have breathed for her if he could. He would have done anything for her.
“You want Chunky Monkey. Admit it.” He pulled her closer, until she could feel every hard ridge of his body and then closer still.
“Wait. Are we still talking about ice cream?”
“No.” He kissed her. Not a tender kiss at all, but rough and claiming.
Her hands fisted his shirt, and then with both hands she untucked it at his waist, letting her palms glide up his hard chest, touching the soft short hairs between her fingers. How she’d missed this, missed him. No matter what, they’d always had this part right. Touching, feeling.
Riley squeezed her ass, his other hand sliding under her sweater to tug her bra cup aside. But then just as suddenly as he’d kissed her, he stopped.
“Stay with me.” She pulled on his arm, directing him toward the bedroom.
“Slow down, baby.”
“It’s this way to the bedroom.” Sophia tugged on his hand again, a little like trying to move a mountain. “Just like your floor plan but reversed.”
“Wait.” He bit his lower lip and didn’t move.
“I don’t want to wait. I’ve waited long enough.”
“You can wait a little bit longer, can’t you?” He grimaced.
“Why should I?”
He chuckled and framed her face with both hands. “Because I need you to be sure.”
“Oh, that. I’m sure, Riley. I want this. I want you.”
“No,” he said and his hands dropped down. “I want you to be sure about us.”
“Us?”
“You and me. Us. Forever. Can you tell me you’re sure about that?” He studied her.
“Listen, you and I …”
“Yeah.” He moved away from her, picking his jacket up on the way to the door. “I’ll talk to you tomorrow.”
“But—” Was he seriously leaving her? Now? After all that talk about Chunky Monkey? Bastard!
“Eat your soup,” he called out and shut her front door.

When early onset stage fright dashed dreams of Rock and Roll Hall of Fame status, Heatherly tackled her first book in 2010, and now the people and voices that occupy her head refuse to leave. She no longer sings unless you count randomly bursting into song to annoy her children (and the dogs).

If she were not an author, Heatherly maintains she would be a detective and a criminal's worst nightmare. She watches Dateline every Friday night and takes notes.

She lives in northern California with her family, including two beagles, one who can say 'hello' and the other who can feel a pea through several pillows.