The Girl From Home by Adam Mitzner 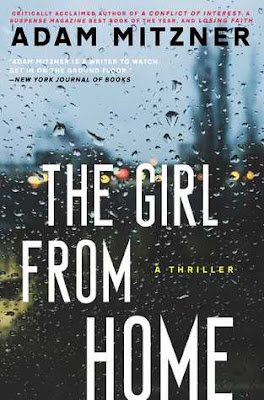 The acclaimed author, whose recent novel of suspense Losing Faith was declared “startling…a well-crafted story” (Kirkus Reviews), takes you on a gripping psychological thrill ride in this electrifying tale of a millionaire who will go to deadly lengths to get what he wants.

Jonathan Caine is a true master of the universe—a currency wizard with a trophy wife, a penthouse condo with a view of the Statue of Liberty, and the desire for more—when his world comes crashing down, spiraling him into a relentless fall from grace. Devastated, Jonathan returns to his hometown to care for his ailing father and attend his twenty-fifth high school reunion, where he becomes reacquainted with former prom queen Jacqueline Williams. Back in the day, Jackie didn’t even know Jonathan existed. Now she is intrigued by the man he has become. But their budding relationship has problems, not the least of which is Jackie’s jealous and abusive husband. Jonathan is determined to learn from his mistakes, but is he capable of complete transformation? Or will a shocking temptation test his desire for redemption beyond anything he could have imagined?

When I started reading The Girl From Home, I wasn't crazy about Jonathan. He was cold and calculating. He lived by a motto : "I want what I want". So exactly, when did I decide I want this guy to end up having a happy ending?    Not sure. I just know that I wanted him to find his happy.

The beginning of the story was slow for me. Jonathan is a master in trading. He is rich and powerful and he's good with other people's money until things change for him. One bad investment could mean the end of his career and even worse, he could be looking at jail time. He could lose everything he has worked so hard to have.

The story moves forward to Jonathan visiting his father who has dementia and probably won't live for too long. Jonathan is staying at the family's home while visiting his father at the nursing home almost on a daily basis. While in town, Jonathan decides to attend his twenty-fifth high school reunion where he meets the girl he was crazy about in school but never talk to, Jacqueline Williams.

For her part, Jacqueline is living in hell. She married the quarterback who turned out to love to abuse her. She doesn't know how much she can tolerate before he kills her. Meeting Jonathan at the high school reunion is the one time she's able to feel happy. Starting a relationship with him can only lead to trouble. And trouble does come.

In the end, I gotta admit I was one hundred percent behind them getting together by any means necessary. I do believe that Jonathan changed. He let go of money, learned about sacrifice and in his mind, he did get what he wanted. In a twisted way, but he did.


A complimentary copy was provided by Gallery in exchange for an honest review.