Listen to Me
by Kristen Proby 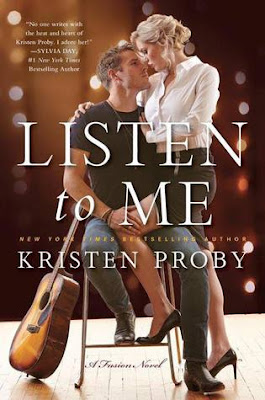 
In New York Times and USA Today bestselling author Kristen Proby’s brand new series, five best friends open a hot new restaurant, but one of them gets much more than she bargained for when a sexy former rock star walks through the doors—and into her heart.
Seduction is quickly becoming the hottest new restaurant in Portland, and Addison Wade is proud to claim 1/5 of the credit. She’s determined to make it a success and can’t think of a better way to bring in new customers than live music. But when former rock star Jake Keller swaggers through the doors to apply for the weekend gig, she knows she’s in trouble. Addie instantly recognizes him—his posters were plastered all over her bedroom walls in high school—he’s all bad boy...exactly her type and exactly what she doesn’t need.
Jake Keller walked away from the limelight five years ago and yearns to return to what’s always driven him: the music. If he gets to work for a smart-mouthed, funny-as-hell bombshell, all the better. But talking Addie into giving him the job is far easier than persuading her that he wants more than a romp in her bed. Just when she begins to drop her walls, Jake’s past finally catches up with him.
Will Addie be torn apart once again or will Jake be able to convince her to drown out her doubts and listen to her heart?

Addison and her four best friends are co-owners of Seduction, the hottest new restaurant in town. After being burned by another “bad boy” musician, she realizes she can only rely on herself and vows not to let herself be blinded by another man who takes advantage of her.

When the restaurant is looking for someone to sing on Friday and Saturday nights, she never expects former rock star, Jake Keller, to apply for the position.

Jake Keller walked away from fame 5 years ago.  He doesn’t miss the fame or the traveling, he just misses the singing. He doesn’t realize how much he needs this weekend job, he also doesn’t realize he’s going to meet Addison, the bombshell blond that won’t give him the time of day. Jake’s persistent though, and he won’t stop until she’s his.

I devoured LISTEN TO ME. Kristen Proby writes funny, relatable characters and I couldn’t get enough of this close group of friends.

Addison is a strong, slightly jaded woman. She’s fed up with being a doormat and refuses to be treated poorly anymore, so when Jake tries to make her open up it’s a trial, but he realizes that she’s one of the most amazing women he’s ever met.

Jake isn’t your typical rockstar which I loved. He was still cocky with a huge ego, but his cockiness is different.

Both characters have struggles and a past that gives them depth and appreciation for each other. I think this will definitely be one of my favorite books of the year. If you loved Kristen Proby’s WITH ME IN SEATTLE series, you’ll definitely love this book. I’m eagerly waiting for the next book in the series to release, I know it’ll be just as amazing!