Buried and Shadowed
by Carrie Ann Ryan and Alexandra Ivy 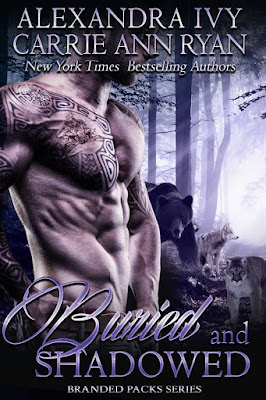 Buried
Gibson Barton knows his Pack is on the verge of something they will never be able to prepare for: a chance at freedom. Yet when he’s finally able to open his eyes to what might be his fate, it could be too late.
As a submissive wolf of her Pack, Mandy Calhoun has always only watched Gibson from afar. Because of her fears, she hasn’t let her intentions toward him—or the other in her sights—be known.
Oliver Dare is the Foreseer of the Ursine Pack, and knows with each vision, his death is that much closer. Yet he cannot see his own future—or that of the two wolves who have been thrust into his path.
There is danger lurking in the den, and as the three learn to process their emotions and navigate their temptations, they’ll have to fight for something they never knew they had—or sacrifice it all for a purpose far greater than their own destinies.

Shadowed
Sinclair, Alpha of the Unseen Pack, is determined to destroy the Shifter Accommodation Unit. He understands that his people will never be free until the truth is revealed and their enemies are brought out of the shadows and exposed to the public. Unfortunately, the human female who has been secretly working with him has disappeared, and his priorities must shift slightly. He’s resolved to track her down, and not just because she has the information he needs.


Mira Reese isn’t stupid.  She’s painfully aware that the sexy shifter she’s been working with has been using her fascination for him to gain access to the CDC computer system. But that doesn’t stop her from helping Sinclair.  Not when it allows her to be close to him. But after the CDC kidnaps her, she realizes that this isn’t a game. She’s a potential savior for the future of the shifters—and perhaps especially the loner wolf who stirs her passions.

New York Times and USA Today Bestselling Author Carrie Ann Ryan never thought she’d be a writer. Not really. No, she loved math and science and even went on to graduate school in chemistry. Yes, she read as a kid and devoured teen fiction and Harry Potter, but it wasn’t until someone handed her a romance book in her late teens that she realized that there was something out there just for her. When another author suggested she use the voices in her head for good and not evil, The Redwood Pack and all her other stories were born.
Carrie Ann is a bestselling author of over twenty novels and novellas and has so much more on her mind (and on her spreadsheets *grins*) that she isn’t planning on giving up her dream anytime soon.

Alexandra Ivy
I'm not exactly sure when I fell in love with books. Probably on my mother's knee listening to her read Dr. Seuss to me. I do remember that I was barely old enough to cross the street by myself when I discovered the delights of the local library. Could anything be more wonderful than spending summer days surrounded by stacks of Nancy Drew mysteries? Over the years I fell in love with Victoria Holt, Jane Austen, Agatha Christie, and J.R.R. Tolkien just to name a few. I read poetry, essays, biographies, and plays. In fact, I read anything I could get my hands on.

Years later (no, I'm not admitting how many) I'm still an avid reader, and my tastes are still as varied as they were in my youth, which I suppose helps to explain why I enjoy writing regency historicals under the name of Deborah Raleigh, as well as my contemporary paranormals as Alexandra Ivy. For now that is enough to keep me busy, but who knows what the future might hold!

I do have a few other loves in my life besides reading and writing, the most important being my unbelievably patient husband, David, and my two sons, Chance and Alexander. Without their constant support and belief in me, I never could have been able to follow my dreams. They are truly my heroes.