Some Women by Emily Liebert 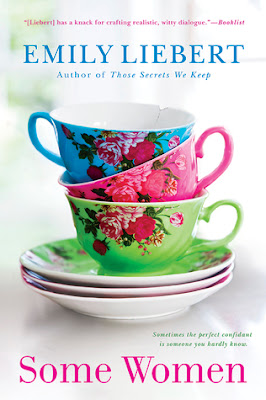 An engrossing and thought provoking novel that examines the intricacies of marriage, friendship, and the power of unexpected connections…

Annabel Ford has everything under control, devoting her time to her twin five-year-old boys and to keeping her household running seamlessly. So when her husband of a decade announces that he’s leaving her, without warning, she’s blindsided. And suddenly her world begins to unravel.

Single mother Piper Whitley has always done her best to balance it all—raising her daughter Fern by herself and advancing her career as a crime reporter. Only now that she’s finally met the man of her dreams, Fern’s absentee father arrives on the scene and throws everything into a tailspin.

Married to the heir of a thriving media conglomerate, Mackenzie Mead has many reasons to count her blessings. But with an imperious mother-in-law—who’s also her boss—and a husband with whom she can no longer seem to connect, something has to give.

On the surface, these three women may not have much in common. Yet when their lives are thrust together and unlikely friendships are formed—at a time when they all need someone to lean on—Annabel, Piper, and Mackenzie band together to help each navigate their new realities.

Some Women had great leading ladies. Each of them was going through big changes in their lives.

Annabel Ford has been married for years and has a set of twins Harper and Hudson but her husband Henry is leaving her. He gives her no explanation. She believes there must be another woman and decides to have him followed.

Piper Whitley is in love with Todd. Todd is a nice guy, dependable and great to her daughter Fern. When Todd moves in with them, Fern starts acting out. She is rude and she's obsessed with finding her biological father. who left them after finding out Piper was pregnant.  When Max, the father, reappears in their lives after years of not knowing anything about him, Piper would have to decide what to do and whom to love.

Mackenzie Mead is happily married to Trevor but her mother-in-law CeCe, keeps on pressuring them to have babies. Mackenzie is willing to do it since she knows her mother-in-law is relentless. However, she begins to realize that her marriage is not as stable as she thought.

These three women meet in an exercise class and over the period of months they become a unit. A support for each other while their lives are falling apart and they are also there for the rebirth as strong women.

I do have to say that the beginning was a little slow for me. The introduction of the characters took time but it picks up and then it was impossible to put down.

I like all 3 of the women. They each have great characteristics. I like that they helped each other when one of them was in trouble. I wish women were more like this in real life.

As for the guys, Todd wins the award. He was my favorite.

"You're stronger than you think."