He Loves Me Not by Tierney Fowler 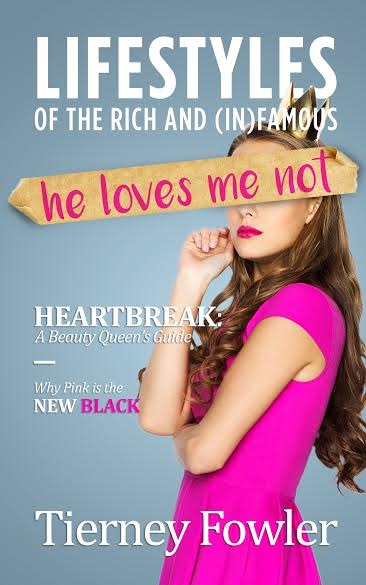 In the game of love, everyone roots for the underdog. You know, that girl-next-door type who wears glasses and has a shy smile and who falls for the most popular boy in school…she’s the hero of every story. And when the shy girl takes off her glasses and the quarterback kisses her and the crowd roars and the movie fades to black, people sit back and are satisfied.

But what about the cheerleader? The one he dumps at the fifty-yard line and the one who runs off the field humiliated and sobbing? What about her feelings? What about her?

He Loves Me Not tells the story of what happens after the cheerleader is denied her fairy tale ending. Maggie's life was perfect--she had perfect friends, perfect parents, and a perfect boyfriend. But when she's abruptly dumped in front of the entire county by that perfect boyfriend, her life falls apart. With her clique, her friends, and her social standing obliterated, Maggie is resigned to a lonely, humiliating senior year of high school.

...at least until she meets AJ Abbott, a musician who breaks every rule her mother ever taught her. He has no college degree. He wants to be a rockstar. He wears entirely too much black and leather.

But despite their differences, Maggie is slowly drawn into AJ's rock and roll lifestyle, and she'll be forced to choose which is more important--clinging to her nonexistent popularity or learning that maybe there's more to her than her beauty queen tiaras and cheerleader pom-poms.

Everything was perfect. The stereo was pumping the latest Luke Brian album, and there was a giant spread of food in the dining room. Maggie had even caved and let Caroline set up a few kegs on the patio. The roaring bonfire on the beach—kindly built by her daddy earlier—was perfect for keeping away the cold. She had everything for a legendary party. But, instead of being filled with dozens of beautiful teenagers dancing and laughing, Maggie’s living room was filled with nerds. Like, actual nerds playing some kind of magical card game.
Maggie hadn’t been so embarrassed since Bobby had dumped her in front of the entire school. With a smile plastered on her face, she pulled Caroline into the kitchen. “What’s going on? How are these people here right now?” She gestured to the laughing group of geeky kids. “Where are our friends?”
Caroline’s face was tight as she scrolled through her phone. “I thought everyone was coming. They swore they were coming. Chloe said…” She trailed off, her eyes meeting Maggie’s. “I thought it was going to be okay.”
“I mean, they’re just late, then. That’s all.” Maggie nodded, trying to force herself to believe her words. “Omigod, is he posting that?” In the living room, a group of kids posed together for a picture. “If he tags my house, I’m going to be so embarrassed. How could they do this to me? I'm such a loser.” Maggie knew how terribly snobby she sounded, but she couldn’t keep the words inside. She had visions of what school would be like on Monday. Everyone would be laughing at her for hosting the lamest party ever.
“You’re not a loser,” Caroline said robotically, her eyes glued to her phone. “Maybe plans just...changed?”
“Or Chloe still hates me,” Maggie said, thinking back to all the times she’d forced herself to think nice thoughts about the girl. She regretted it all. She was such an idiot. This was supposed to be her big reentry into the popular crowd. She’d been so happy. It was all going to work out.
Caroline shrugged. “I don’t know. But…it looks like Bobby and Chloe are having a party at his house tonight. Maybe they…they probably just forgot.” She tried to hide her phone, but Maggie was able to snatch it and look at the screen. On Abby’s Instagram, the cheerleaders were all posing in Bobby’s living room with identical smiles on their face and red cups clutched in their hands. It was taken thirteen minutes ago.
Maggie slumped on the counter, holding her head in her hands. The laughter of nerds floated through the air, cutting through Luke’s beautiful voice. “I can’t believe this is my life.”
“Maybe it’s…a good chance for you to make new…friends?” Caroline offered weakly.
“I don’t need new friends! I want my old friends! I just want things to go back to the way they used to be!” Maggie looked up at the ceiling, trying to keep the tears from welling up in her eyes and ruining her makeup. Not like it would matter. Nobody was even here to appreciate how cute she looked.
“Maybe I can go to Bobby’s house and see what happened? They could just be pre-gaming over there first?” Caroline picked up her purse from the counter.
Maggie grabbed her elbow. “Don’t you leave me here alone!”
“I’ll be back. I promise.” Caroline smiled a little too wide. Maggie knew that probably wasn’t true. This party was lame. All their friends—well, Caroline’s friends—were at Bobby’s having a great time. It was no contest.
“Fine. Have fun.” Maggie couldn’t keep the bitterness out of her voice. Bobby had left her. AJ had left her. Now her best friend was leaving her. She couldn’t take much more of this. Senior year of high school was supposed to be the best time of her life, and now it was a disaster. Suddenly, she couldn’t wait to escape to college and forget all these people ever existed.
Caroline hugged her and then slipped out of the front door. Maggie stood alone in the kitchen, her face in her hands as she tried to steady herself with deep breaths. It was going to be okay. It was going to be okay. What would her mom do in this situation? She tried to summon her mother’s voice in her head. Girls with good breeding do the right thing where everyone can see. Girls with good character do the right thing when no one is watching. Right. Well, she had breeding and character. She’d do the right thing.
Taking one last deep breath, Maggie picked up a plate of cookies and swept into the living room—a bright smile pasted on her face again. Maybe she did need to make some new friends. And they did look like they were having bunches of fun. She sat down next to a girl she only knew by sight and tried to look interested. “So, how do you play?” The long lost Wakefield twin. Blair's head minion. The BSC party planner. The original Pink Ranger. Stephanie Tanner's BFF.
In addition to crafting young adult and new adult novels, Tierney Fowler works as an IT consultant by day and a style blogger by night. She resides in Northern Virginia near four shopping malls, counts leopard as her favorite color, and once shot a reality TV show pilot...that never went anywhere.

a Rafflecopter giveaway
Posted by MissDaemon at 10:03 AM

Email ThisBlogThis!Share to TwitterShare to FacebookShare to Pinterest
Labels: Review Blog Tour, Excerpt and Giveaway, He Loves Me Not, Tierney Fowler