Falling In (The Surrender Trilogy #1)
by Lydia Michaels 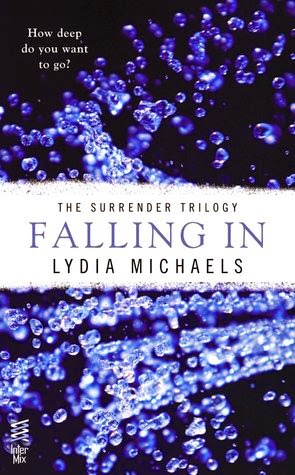 Falling In by Lydia Michaels
Releases in Paperback: October 7th, 2015

Blurb:
The debut of an emotionally charged and highly erotic contemporary romance trilogy, in which love and trust are the most dangerous games of all…
With a dark past that would have shattered most people, Evelyn “Scout” Keats is doing what no one in her bleak world thinks possible—getting off the streets and leaving her impoverished life behind. She’s a new maid at the luxurious Patras Hotel, and aims to keep her job no matter what. But that doesn’t mean she’s going to sacrifice her dignity, or let anyone into her heart. The risk of losing either is just too great.
When hotel tycoon Lucian Patras discovers Evelyn in a compromising position, he uses everything at his disposal to seduce her—a proposition that both surprises and frightens her.
Ignorant to her true circumstances, Lucian relentlessly pursues Scout as a prize to be won. But he is soon given an unforgettable lesson in love and sacrifice when he learns how far Scout has gone to gain her independence and discovers that there are some things money can never buy.

MrsAlcide's Review:
This book was so fantastic.  It’s the first book in the Surrender Trilogy.  I had a rough start but once I got into it I could NOT put it down.  I instantly fell for the intense, hot headed, insanely rich hotel tycoon, Lucian Patras.

Evelyn “Scout” Keats has anything but an ordinary life.  Living on the streets and taking care of her drug addicted mother is all she has known.  When she lands a job at Patras hotel as a maid, she thinks her luck will slowly improve.  Her first day by herself on the job, she is assigned to clean the penthouse.  While she is up there cleaning up she knocks some documents off the desk. As she is picking them up, in comes the domineering tenant.  He is not in a good mood and is not hesitant on reprimanding her for her mistake.  Afraid about losing her job, she quickly picks up the papers and leaves the room.

Lucian Patras is a man who has always gotten what he wants.   When he meets Evelyn for the first time, he realizes that he has to have her.  He makes a deal with her, and it’s one she cannot resist.  They both enjoy each others company, and soon it becomes way more than a “deal”.   Problem is, neither of them think they are capable of love.

“Why am I different for you?”

He paused.  Softly he said, “You see the world differently.  You were more impressed by lilies than ten thousand dollars worth of designer clothes.  I know you respect money and the power it holds, but you see it only as a means to an end.  Other people see ME as that means.”

Falling In was a really refreshing read.  It had the Fifty Shades of Grey/Crossfire feel, but with a completely different twist.   Lucian wasn’t a wishy-washy character either.  He knew what he wanted and he was not afraid to tell her how he felt, even if those feelings were new to him.  I was also really worried about the homeless part.  I was worried that Evelyn would be a weak heroine or would pull the “poor me” card.  But there was none of that.  I honestly felt the love and chemistry between the two characters.

This story ends with a small cliffhanger and I instantly had to begin the second book!


Evelyn “Scout” Keats is homeless. She spends her nights at the shelter. She wants more in life. She seeks stability. She has one friend named Parker Hughes, who’s very smart but doesn’t seem to want to improve his life and she takes care of her heroin addict mother. Her recent job is at the Patras Hotel. She works as a maid and she wants to make enough money to feel safe. When she’s asked to clean the Penthouse, her life takes a dramatic turn for the better. She meets Lucian Patras, the owner. He takes an immediate liking to her and will do whatever he can to keep her.

I’m so glad my friend told me to read this book. It was quite different.
Yes, the hero is a millionaire hotel owner. Yes, he’s not into vanilla sex but he can be so sweet when he wants to be. He’s not scared of admitting his feelings when he has too.
Scout is homeless and even though her life is anything but ideal, she’s strong, funny and feisty when she needs to be.

“Brazil must be filled with a bunch of sick, sadistic bastards.”

Since we get multiple POV’s, it helps with their character development.
When I was in Scout’s head, I felt terrified of her loosing her job and loosing the small stability she has acquired. I was so mad with Lucian in a certain scene but luckily he redeems himself a few pages later. That's what I liked about him, when he realizes a mistake, he's smart enough to say it. He's a fast learner and when he becomes protective of Scout he shines.
As per the secondary characters, I hated Slade and I want Lydia to make me happy and write about Jamie and Antoinette.


“Baby, Jamie and I are very similar. If there’s something we want, we go after it. It doesn’t matter who’s guarding it from us. Once we set our sights on it, it’s already considered ours. And we always get what we consider ours.”
“Well, what about Antoinette’s boyfriend? Surely Jamie wouldn’t fight—”


“Antoinette’s boyfriend couldn’t kill a spider. He’s a tissue. Jamie would destroy him if it came to that.”

Now, I must read the other two books in this trilogy. Luckily for me, both are out.

“Two, Lucian loved her very much. Three, she loved him more. And four, this would end very badly and her heart would likely never beat right again.”

Cliffhanger: Yes, a mild one.

Posted by MrsAlcide at 5:17 PM