Breaking Out by Lydia Michaels Review 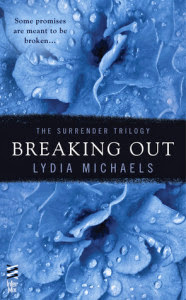 Breaking Out by Lydia Michaels

Blurb:
Second in the darkly compelling, sexually-charged contemporary romance trilogy, in which two men vie for the mind, body, and heart of a woman who may never give in to their wishes—or her own…
Evelyn “Scout” Keats has left behind her painful past of surviving on the streets, and is now living in the luxurious penthouse master suite of Hotel Patras with her lover, billionaire Lucian Patras. But what she doesn’t know is the price Lucien paid for her freedom.
To protect Scout’s life, Lucian cut a deal with a dangerous man from her past, Parker Hughes. He swore to stay away from her for thirty days, even though he knows Parker will be fighting to keep them apart for good and take Scout as his own.
Yet neither man realizes that Scout is not about to be used as a prize or a bargaining chip for any man’s power play—and she falls back on her hard-earned self-respect and courage to show both men that the only person she truly needs is herself.
But Lucien has other plans…

MrsAlcide's Review
4.5 AMAZING STARS
Breaking Out picked up right after Falling In. Lucian Patras is the owner of The Patras hotel and several other developments. Evelyn Keats was a maid at his hotel and ended up being the woman of Lucian’s dreams. Everything is going great between the new couple until a deal that Lucian made a few months previous, finally comes back up and rips him in half. Always a man of his word, Lucian holds up his end of the deal, breaking the one woman he loves heart in the process.

Breaking Out is the second book in The Surrender Trilogy. It was very fast paced and there was never a dull moment. The writing was very easy and entertaining to read.

The beginning of the story my heart was happy. The couple was flourishing and there was no drama. They had their ups and downs, as any couple does, but they were there for each other and always worked things out.

Towards the end when Lucian had to keep his end of a deal he made in book one, I was getting so angry! Why do people have to come in and ruin things for EVERYONE! Doesn’t Evelyn deserve happiness?! HELL YEAH SHE DOES!

This whole story so far, Evelyn had always been the strong character. She was the rock, never allowing herself to truly love because she had seen the evil of love. She had seen how those could hurt her if she showed those emotions. So seeing her broken and hurt was hard to read. But once again, even though she hurt, she had to pick herself back up and survive.

“Rain never lasted forever. After every harsh winter she’d experienced from the outside looking in, there came a rebirth of life. It seemed that was al Scout had ever done, get reborn time and time again.”

And Lucian, always so sure of himself and confident. Seeing him broken and missing Evelyn was hard. I could see how much he truly loved her, but I still wanted to smack him for “being a man of his word”!!!!

“No, I want her because I love her, because without her I’m incomplete. She makes me a better person. She grounds me. Being with her is nothing like being with Monique or anyone else for that matter. She’s….perfect.”

So there are obviously so many other amazing things in this book but I don’t want to spoil anything!

Since this is a trilogy, we obviously know that this one ends with a cliffhanger! I am jumping straight to the third book! I am so happy I gave this new series and author a try! I will definitely be reading anything else she writes!

Posted by MrsAlcide at 5:30 PM