Unbinding (World of the Lupi #11)
by Eileen Wilks 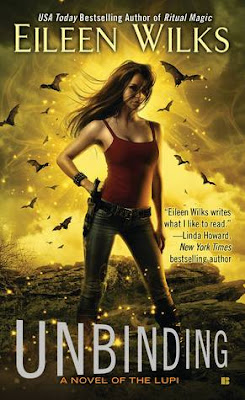 Synopsis
After questing through the sidhe realms with her ex-hellhound lover, Nathan, Kai Tallman Michalski has finally returned home. But she knows Nathan will eventually be called back to serve his queen—and Kai will have to decide whether to enter her majesty’s service as well. Sure, the job comes with great bennies, but there’s one big downside: she would have to swear absolute fealty to the Queen of Winter.For now, though, Kai is glad to be home, and glad that Nathan completed his mission for his queen with surprising ease. But what seemed to be a quick conclusion turns out to be anything but. The two of them helped thwart the sidhe god of chaos—and he is not happy about that. He’s got plans for them. Plans, too, for the sidhe who killed him some three millennia ago. Nor has he abandoned his plans for Earth, as they learn when chaos begins bursting out all over...

Unbinding centers on Kai and Nathan.

If you have read the prior books you know Nathan used to be a Hellhound and he has pledged his loyalty to the Winter Queen. She cares for him and she has offered to care for Kai too. Kai is still undecided.

Kai has a Gift and she also has a little sidhe in her. For me the best part of the book consisted of how unsure Kai is of herself and her Gift at the beginning of the story but when Nathan is captured she takes over the investigation and by the end of the book her character has grown and she knows what she wants.

Nathan's love for Kai is undeniable. You know this is a man who will do anything in his power to keep her safe. I think he surprised himself in realizing he cared for others too. He cared for Dell, Kai's familiar and also for the Lupi.

I like Dell, she was smart and instrumental in Kai's survival.

We also get Cullen and Cynna and I adore them as a couple. Their book was one of my favorites in the series.

Benedict and Arjenie play a big part too. I love how smart she is and when she refers to Benedict as a "poor baby" it made me smile.

I know a lot of people missed Lily and Rule but even though I would have enjoyed reading about them I was very pleased with the story the way it was.
Cliffhanger: No