The Wicked Heir by Elizabeth Michels 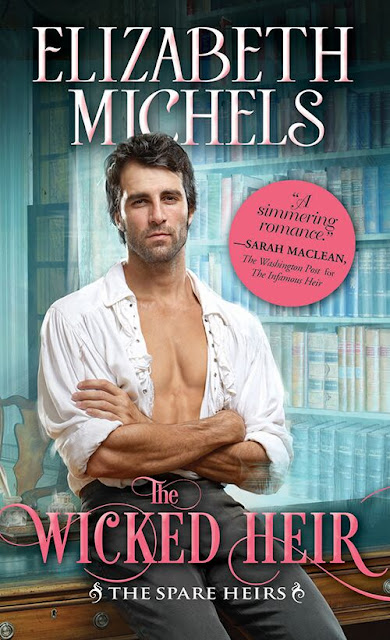 When the love of Lady Isabelle Fairlyn’s life is betrothed to her twin sister, Isabelle vows to find a suitable replacement before the end of the season. He must be a talented dancer, have a keen fashion sense, and be perfectly dashing in every way.

Fallon St. James is the farthest thing from perfectly anything. As head of the secretive Spare Heirs Society, he must stick to the shadows…even as Isabelle’s friendship pulls him reluctantly into the light.  But when Isabelle gets involved with the one man who could destroy Spares, Fallon must decide between protecting his life’s work—or risking everything to save the woman whose warm smile leaves him breathless. 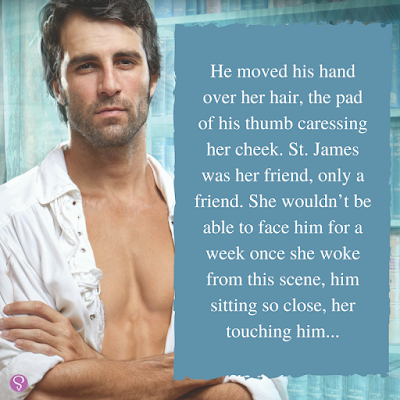 Enter to win a copy of The Infamous Heir, the charming first book in Elizabeth Michels’ Spare Heirs series!

“Am I dead?” Isabelle’s voice croaked as if she’d never used it before.
“No. Thankfully not,” came a male voice from the far side of the room.
She gasped and pulled herself up a bit against the pillows. Why was there a man with her in a strange bedchamber? Had he hit her on the head and brought her here? Isabelle’s mind reeled with questions, each punctuated by the pain in her skull.
Coals from a near-dead fire sprang to life in the grate across the room, lighting a tall silhouette. The man dusted his hands off and turned toward her. “You did have me worried there for a bit though.”
Blinking into the haziness that was the other side of the room, she forced her eyes to adjust to the light. There was something familiar about his deep voice, the confidence in his movements, but she couldn’t make sense of any of this. “Whose bedchamber am I in?”
“Mine.” St. James came into focus as he moved to her side, but his answer was no answer at all.
This room couldn’t belong to St. James, and she couldn’t be lying within it. None of this was real. It was all a dream caused by the bump on her head. She must have hit it quite hard to envision herself in such a place, with St. James of all people. It was rather amusing, really, aside from her throbbing head. That part wasn’t amusing at all. But the setting she’d placed St. James in did bring a smile to her face.
A large bedchamber filled with plush furnishings and covered in busy floral patterns—ha! And in her mind she’d made her most stern—and only male—friend claim he lived there. Dreams were entertaining at times. St. James’s chosen place to sleep would be on a cot beside a desk. Or perhaps he never reclined at all; he only caught a quick nap in a chair between meetings. She giggled, which only drew him closer. A look of concern made him look more serious than ever as he stood surrounded in flowers.
She scowled back at him and laughed. “St. James, I’m in your bed—your overly feminine bed,” she whispered up to him. “Are we married in this dream? Don’t you want to kiss me, have your way with me here on our wedding night?”
“Devil take it, you’re delusional. I’ll have the doctor return,” he muttered. He leaned against the bed, next to her, and lifted a hand to check something on her forehead.
“Oh, a doctor! Yes, I’ll need one of those. I am injured. Horribly injured! Save me, St. James. The only way I’ll live is if you kiss me.” She reached up and grabbed the fabric of his waistcoat, pulling him closer. He braced a hand on the bed on the other side of her body, smoothed her hair back from her face, and watched her. The fabric of his waistcoat was textured by the pattern of gray threads stitched into it and was rough under her fingers, drawing her attention from the intense look in his eyes. How odd to have such detail in a dream.
“Your clothing feels so real.”
He’d removed his coat and cravat. His waistcoat hung open, and his clothes were rumpled, as if he’d slept in them. She’d never seen him in such a state of undress. She moved her hand to his shirt and splayed her hand across his chest. The heat of his skin warmed her fingers as his heart beat beneath her palm. Dream St. James had a broad chest and muscles that twitched at her touch. She lifted her hand to his shoulder, her other hand skimming up his side. His breath hitched in his chest. It was odd that she’d never noticed the real man’s fit form, never before caught the look in his eyes that was one part caring concern, one part intense desire.
He moved his hand over her hair, the pad of his thumb caressing her cheek. St. James was her friend, only a friend. She wouldn’t be able to face him for a week once she woke from this scene, him sitting so close, her touching him. “This dream…”
“Isn’t a dream,” he said, not breaking the contact he had with her.  Instead he searched her eyes and continued to touch her cheek, her temple, in soothing, gentle caresses, as if she might break.
It took a moment for his words to sink into her aching skull. “It isn’t…” She froze in her exploration of his body, her gaze dropping to her hands that had been roaming over his chest for well over a minute. “What?”
“You aren’t dreaming. I found you on the floor of the museum earlier today.”
“And you brought me here? Why? Wait… Earlier today?”  She had to leave. She had to find her family. She tried to push St. James away to sit up, but he didn’t budge.
“You were unconscious. I know you’re confused, but you’re safe now…in my home, my bed.”
“Your… No, truly. Where am I?” She ripped her gaze from his to scan the room beyond him, looking for anything that made sense of the past few minutes. This room could not be Mr. St. James’s private quarters. It didn’t fit what she knew of the man. And why was she in his private anything? She couldn’t be. Her reputation. Victoria’s wedding. She needed to gather her things and leave this place, wherever it was.
“You’re in my bedchamber—truly.”
“What?” She stared up at him, taking in the sympathy and, unfortunately for her, honesty in his expression.
“You need to rest,” he said in a tone that would command armies but not Isabelle on her sister’s wedding day.
“I need to leave,” she stated as she pushed against his unyielding chest in an effort to sit up…
“No.”