A Fare to Remember by Opal Carew 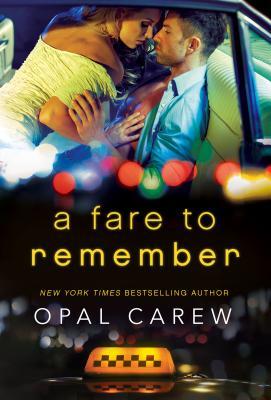 Stevie has given up on love and just wants a simple life driving her taxi. But her plans are turned upside down when gorgeous billionaire Reid Jacobs steps into the back of her cab. Commanding and mysterious, he’s a temptation she can't resist—and soon their torrid one night stand leads to an intoxicating affair.

In Reid’s strong arms, Stevie finds herself falling harder than she ever imagined. But is she ready to trust again? And when his business partner falls for Stevie, will it change everything? One thing is clear: she’s about to take the ride of her life….

A Fare to Remember by Opal Carew is one sexy ride

A Fare to Remember is not for someone with a weak heart. It’s HOT! There are plenty of sexual encounters and hot scenes. Now, If you expect monogamy, this novel is not for you. You have been warned.

Stevie Trivoli is a taxi driver who just found out her boyfriend was cheating on her. Her bags are in her car and she knows she will need a new place to stay. Stevie is a strong woman but this isn't the first time a man has hurt her. Stevie's talking on the phone with her best friend when her next customer gets inside. He's an attractive businessman who strikes a personal conversation with her and who doesn't hide the desire to get to know her better. Steve is attracted to him but she doesn't want to make the same mistake and involve her heart ever again. This time she wants something casual.

Reid Jacobs is in town just to close on a new business deal when he meets Stevie. He likes what he sees and he wants to convince her to give him a chance. He knows Stevie is different than other women he has been with. She doesn't seem to be interested in his money or his power. He doesn't want to disregard the connection they share. Letting her go is not an option. Convincing her to attend a dinner business meeting with him is a must. After one night with her, he's sure this could go somewhere. He just needs to make her see it too. Things get a lot more complicated when his best friend Dylan enters the picture and so does her ex-fiancée.

A Fare to Remember had good characters. It was fast-paced and very entertaining. I read it in just one sitting. I like both main characters. Stefani knew what she wanted and she was not shy about it. Reid was also likable. It was easy to fall for him. He didn't play any games and was willing to do anything to keep Stevie with him. I felt bad for Dylan. He was sweet and I thought he deserved more.  Maybe he'll get his own book?

A complimentary copy was provided by St. Martin's Press in exchange for an honest review.