The Summer House by Hannah McKinnon 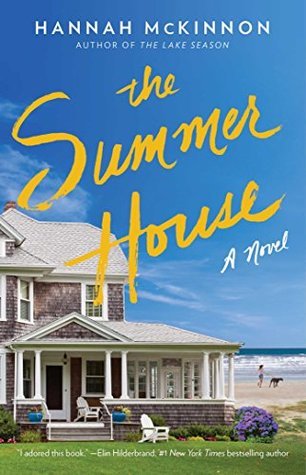 When Flossy Merrill summons her children to the beloved family beach house to celebrate their father’s eightieth birthday, both cherished memories and long-kept secrets come to light in this charming and lyrical novel from the author of The Lake Season and Mystic Summer.

Flossy Merrill has managed to—somewhat begrudgingly—gather her three ungrateful grown children from their dysfunctional lives for a summer reunion at the family’s Rhode Island beach house. Clementine, her youngest child and a young mother of two small children, has caused Flossy the most worry after enduring a tragically life-altering year. But Samuel and his partner Evan are not far behind in their ability to alarm: their prospective adoption search has just taken a heart-wrenching turn. Only Paige, the eldest of the headstrong Merrill clan, is her usual self: arriving precisely on time with her well-adapted teens. Little does her family know that she, too, is facing personal struggles of her own.

No matter. With her family finally congregated under one seaside roof, Flossy is determined to steer her family back on course even as she prepares to reveal the fate of the summer house that everyone has thus far taken for granted: she’s selling it. The Merrill children are both shocked and outraged and each returns to memories of their childhoods at their once beloved summer house—the house where they have not only grown up, but from which they have grown away. With each lost in their respective heartaches, Clementine, Samuel, and Paige will be forced to reconsider what really matters before they all say goodbye to a house that not only defined their summers, but, ultimately, the ways in which they define themselves. Featuring McKinnon’s “sharp and evocative” (Kirkus Reviews) voice, this warm-hearted novel is perfect for fans of Elin Hilderbrand and Mary Alice Monroe.

The Summer House was a great way to begin my summer. It follows three siblings reunited at their vacation home to celebrate their father's eightieth birthday.

Flossy is the strong mother who wants her children together one last time before they sell their home. She's also trying to reconnect with them and help them through their individual heartbreaks. It's hard for her to say goodbye to the summer home, leaving all the memories behind but she knows they need to move forward.

Paige is the oldest. She's a strong-willed woman and she has always been competitive. Her practice as a veterinarian is flourishing but she's exhausted from working long hours. Her marriage is strained after her husband loses his job, and her teenage children are starting to give her headaches too.

Samuel has had a very stable relationship with his husband Evan. He's a workaholic but he also enjoys his time with Evan. After they both decided that it was time to add to a baby to their home, their hearts are crushed after their first attempt at adoption fails.

Clementine is the youngest child. She has two kids and a year ago she lost her husband in an accident. She's still trying to put back together the pieces of her life. She's still grieving.

As you can see, all these characters are suffering. They all have secrets but those won't last long after their time together when their sibling rivalry, jealousy, and heartache make their presence known.

The Summer Home had a well-paced flow. Hannah McKinnon does a fabulous job in the development of her characters. It was hard not to side with one of the siblings. My favorite was Clem.

If you want a good women's fiction with a summer background look no further. This one is for you.