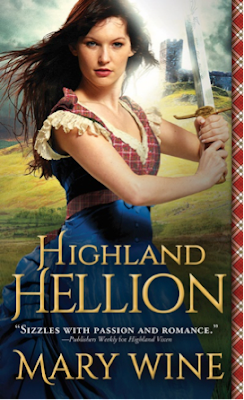 KATHERINE CAREW:
· Illegitimate daughter of an English earl
· Abducted to Scotland at age 14
· No family, no reputation...
· No rules

ROLFE MCTAVISH:
· Heir to an honorable Highland laird
· Can’t believe how well tomboy Kate can fight
· About to learn how much of a woman she really is

Scotland is seething with plots, the vengeful Gordons are spoiling for a fight, and the neighboring clans are at each other’s throats. All it takes is a passionate hellion with a penchant for reckless adventure to ignite the Highlands once more.

“What do ye mean by that?” Helen Grant demanded.

Marcus eyed his wife, crossing his arms over his chest and facing her down, as was his fashion. Helen’s eyes narrowed. “Ye heard me clearly, Wife.”

Helen scoffed and settled her newest babe into its cradle before she turned on him while pulling the laces on her dress tight. “What I heard was that ye seem to think what a woman does with her day is easier to learn than a man’s lot.”

“I should have had charge of her years ago if ye wanted her trained properly in the running of a house,” Helen continued. “Ye are the one who allowed her to be a lad.”

“And for good reason,” Marcus answered back. “She’s English. Ye know how often ye have heard curses against her kin, and I assure ye, I have heard three times as much because the men do tend to mind their tongues around the women in the hall.”

Helen had finished closing her dress and settled her hands on her hips. “As I said, I do nae know what ye expect me to do with her now that ye’ve let her run wild for the past six years. She’s twenty now.”

“I know.” Marcus’s control slipped, allowing his exasperation to bleed through into his tone. “She’s a woman, and yet she was intent on riding out with us last evening.”

“It wouldn’t be the first time,” Helen replied. “Why is it a concern now?”

Marcus’s jaw tightened, and his wife read his expression like a book. There was no point in trying to keep the matter to himself. He let out a soft word of Gaelic.

“We went out and lifted some of the Gordons’ cattle.”

His wife stiffened. The Gordons hated the MacPhersons and would spill blood if they could. Old Laird Colum Gordon wanted vengeance for the death of his son, Lye Rob, and the old man didn’t seem to care that Bhaic MacPherson had killed Lye Rob with good reason. Lye Rob had stolen Bhaic’s new wife, Ailis, and no Highlander worth his name was going to let a man get away with that. Nothing seemed to matter to the old laird of the Gordons except vengeance.

Marcus knew he was playing with fire by going anywhere near Gordon land. Needling the local clans was one matter; going onto Gordon land was another altogether because it might get him killed. His wife was going to tear a strip off his back for chancing it.

“Damn ye, Marcus,” Helen berated him. “So, ye are still acting like a child?” She pointed at their son. “And what will become of the children I bear ye if ye get yer throat slit?”

Marcus only lifted one shoulder in a shrug. “Ye know it will nae come to that. The Grants took some of ours last month. It’s just a bit of fun.”

Helen made a soft sound. “With the Gordons, it is very different. Which is why ye do nae want Katherine along. Do nae think to pull the wool over me eyes.”

Marcus opened his arms in exasperation. “Aye!” He snorted. “There, I’ve agreed with ye. And ye would have a place if I were to pay for me choices in blood, so do nae insult me by asking such a question. Now tell me ye will take her in hand.” He made a motion with his hand. “And teach her…what a woman should be doing with her time.”

Helen wasn’t pleased, and as she looked at her baby, worry creases appeared at the corners of her eyes.

“I love ye, Helen, but ye know full well what manner of man I am.” He pulled her close, wrapping her in his embrace. She settled for just a moment, inhaling the scent of his skin before she pushed against his chest and he released her.

“Aye, well,” Helen said softly. “At twenty years of age, Katherine has decided what sort of woman she is as well. Something ye have allowed. Now ye expect me to be the one to destroy her world?”

Marcus’s expression tightened as he crossed his arms over his chest. “I’ll have words with her.” 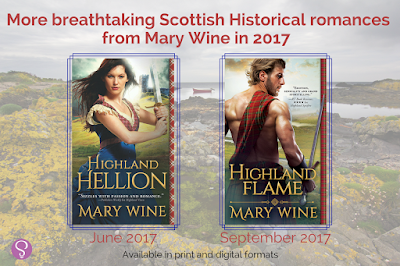 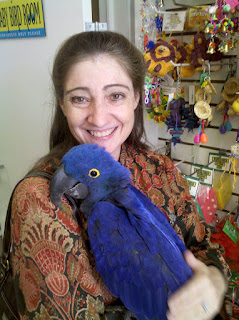