The Sisters of Blue Mountain by Karen Katchur 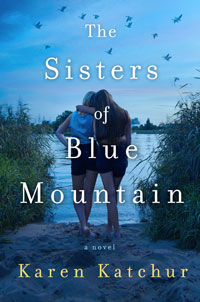 For Linnet, owner of a Bed and Breakfast in Mountain Springs, Pennsylvania, life has been a bit complicated lately. Hundreds of snow geese have died overnight in the dam near the B&B, sparking a media frenzy, threatening the tourist season, and bringing her estranged sister, Myna, to town. If that isn't enough, the women's father has been charged with investigating the incident. But when a younger expert is brought in to replace him on the case and then turns up dead on Linnet's B&B’s property, their father becomes the primary suspect. As the investigation unfolds, the sisters will have to confront each other, their hidden past, and a side of Mountain Springs not seen before.

Karen Katchur has written a thrilling novel of sisters and the secrets that bind them that is sure to appeal to readers of her acclaimed first novel, The Secrets of Lake Road.

I was excited to start this book. It had a nice cover and a good blurb. However, I thought it was too slow and predictable. The ending left me with a feeling of incompleteness.

The book narrates the story of two close siblings who were each other's best friend until an event separated them for decades.

Linnet is the one that stayed home. She's in charge of the family's B&B. She took it over after her mother's passing. Linnet also takes care of her dad who's suffering from dementia. Linnet is married and has one child and her marriage seems solid.

Myna lives in Florida. She's a teacher and she's dating Ben. She's happy with her life and her job. She has not been back home for a while. She has lost contact with her sister. Their bond is missing.

When hundred of dead snow geese fall in the dam close to the B&B's property, Linnet and Myna's father who's a retired ornithologist is asked to help in finding the cause of the event. Soon after, a man's body is found and the clues are all point to their father's involvement. Linnet and Myna will have to find a way to work together to help their dad.  They will also have to deal with Jake a reporter who's more interested in the past than in the current story.

I liked Myna. She was the younger sister and she had distanced herself from Linnet for a reason. I can understand why she did it but I don't think it was fair to their father. Linnet, on the other hand, was pushy, selfish and at times unreasonable. I felt sorry for Jake. He was hurting. I do know I wouldn't be as forgiving as he was.

A complimentary copy was provided by St. Martin's Press in exchange for an honest review.
Posted by MrsLeif at 12:52 PM