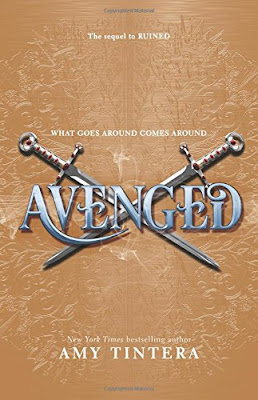 A war that will fuel her. A bond that will destroy her.

Emelina Flores has come home to Ruina. After rescuing her sister, Olivia, from imprisonment in rival kingdom Lera, Em and Olivia together vow to rebuild Ruina to its former glory.

But just because Em and Olivia are out of Lera doesn’t mean they are safe. Their actions over the past year have had consequences, and they are now targets of retaliation. Olivia will destroy everyone who acts against Ruina. Em isn’t as sure.

Ever since Em posed as Prince Casimir’s betrothed in Lera, she’s started to see another side to this war. Lera may have destroyed the Ruined for decades, but Em knows that Cas is different. And now that he’s taken the throne, Em believes a truce is within reach. But Olivia suspects that Em’s romantic feelings for Cas are just coloring her judgement.

Em is determined to bring peace to her home. But when winning the war could mean betraying her family, she faces an impossible choice between loyalty and love. Em must stay one step ahead of her enemies—and her blood—before she’s the next victim in this battle for sovereignty.

I AM IN LOVE WITH THIS SERIES. THIS BOOK WAS SO FREAKING GOOD. I WANT TO SCREAM FROM THE ROOFTOPS BECAUSE I HAVE SO MANY FEELS!!!

So, this FREAKING BOOK. Ugh, I went through so many emotions while reading this book. Avenged was a crazy roller coaster that I didn't want to get off of. This book was captivating, gripping, thrilling, romantic, charming, and so much more. As soon as I read the first page, I didn't want to put this book down!This book constantly kept me on my toes. Alliances were formed, secret plans were made, battles were fought, and bonds were broken. There were so many things happening that I never felt bored while reading this book! The plot kept me glued to the pages, I was completely absorbed. My favorite thing about this book was the characters. I really liked the characters in the first book, but now I am OBSESSED with these characters. Em, Cas, Aren, Iria, Mateo, Galo, Violet, and Olivia have all become characters that I love like they are my own children. I WANT THEM TO ALL GET THEIR HAPPILY EVER AFTERS. I LOVE THEM SO MUCH AND THEIR PAIN BRINGS ME PAIN. I HAVE SO MANY FEELS.

Em really shined in this book. She has grown so much, and that was really showcased in this book. Em was constantly thinking things through and was always trying to be smart about her decisions. I really liked how she thought things out. I always understood her decisions, even if they hurt my heart. She was sensible and understanding but also badass and extremely sarcastic. EM IS MY QUEEN. Cas was just as precious in this book as he was in the first book. He went through a lot in this book, and he was really down on himself. It hurt my heart to see Cas ready to give up on everything, but he thankfully realized he needed to and wanted to fight back. Cas grew a lot in this book. He became a lot more king-like and started to not take crap from anyone. HOWEVER, he never lost his charm or his kind soul. HE IS ADORABLE. HE IS MY SWEET SUMMER CHILD. CAS IS A PURE FLUFFY CUPCAKE SUNSHINE ANGEL THAT I WILL PROTECT AT ALL COSTS.

Olivia was scary in this book, and I was actually LIVING for it, as messed up as that might sound. I loved how she was cutthroat and didn't take crap from anyone. I understood her desire for revenge, but I agreed with Em and all the other characters that Olivia started to go too far. She relished in killing people, and it was terrifying. As interesting as she was, Olivia did some things that really frustrated me in this book. I was glad that Em was just as concerned and frustrated as I was. There is hope for Olivia!!!! Aren was such a well-written character. He has changed and grown so much, and he is now my precious baby. I really liked the direction the author took his character. Aren went through a lot, and I just want to hug him forever. OKAY, SO THE ROMANCES IN THIS BOOK!!!!!! THEY HAVE TAKEN OVER MY LIFE. I SHIP SO MANY CHARACTERS AND I REFUSE TO SEE MY SHIPS SINK. THEY ALL MUST END UP TOGETHER, ALIVE, HAPPY, AND HEALTHY. I WILL ACCEPT NOTHING LESS. EM + CAS, AREN + IRIA, AND MATEO + GALO ARE MY OTPS OF OTPS. I LOVE THEM ALL SO FREAKING MUCH SKLDJAKLSDJASKLDJAKLDSJAKSD.

I loved that the romances in this book were well paced, adorable, and believable. There was angst, but not too much. Everything was perfectly portioned when it came to the romances. Each romance was precious and never overbearing. I WANT MORE OF IT. I could fangirl FOREVER about these ships and how much I ADORE THEM.I could continue to go on about how much I enjoyed this book, but I feel like I should probably stop now. Overall, this was a fantastic book and I cannot wait to get my hands on book three!5 / 5 Fangs
Posted by MissDaemon at 8:30 AM