Dramatically Ever After (Ever After #2)
by Isabel Bandeira 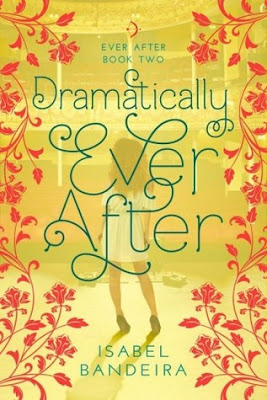 Senior year is not shaping up to be the picture perfect movie Em Katsaros had imagined. Her super hot leading man is five thousand miles away. Her dad just got laid off. And Em can kiss her first-pick university goodbye if she doesn't snag a scholarship.

To turn this Shakespearean tragedy into the Academy Award-winning dream Em has written for herself, she enters a speech competition and manages to cinch a spot in the US Youth Change Council national round. She gets to spend a week in Boston and her prayers might be answered if she can kick butt and win one of the national scholarships.

Everything seems to be going by the script until she finds out Kris Lambert—senior class president, stuck-up jerk, and her nemesis—is going, too. Cue the dramatic music. In Boston, Kris is different. Nice. Cute, even. But she knows his game way too well—be nice to your opponents and then throw them under the bus on your way to victory. Instead of becoming his next victim, Em decides to turn the tables by putting her acting and flirting skills to work. Unfortunately, as they get close to the final competition and judging, reality and acting start to blur.

Can Em use the drama from the stage to get the future she's been dreaming of?

Dramatically Ever After was a very cute book! There were plenty of swoons and adorable banter to keep my romantic heart interested in this story. Parts of this book dragged, but it was pretty entertaining as a whole. One thing that I didn't like as much as I was hoping I would, was the main character. The main character, Em, was just a little too dramatic for my tastes. I know that she was into theater and the title literally has the word "dramatic" in it, but her dramatic antics were a little much to handle at times. Em also tended to exaggerate everything and judge people a lot, which both bothered me. However, all that being said, I did admire a lot of things about Em. I liked how determined she was and how she would do whatever it took to achieve her dreams. It was really inspiring to see her go after her goals. The romance in the book was a bit cliche, but it was still very adorable. The banter between Em and Kris made my heart flutter and put a smile on my face! The romantic moments were extremely cute, but I do wish there would have been even more romantic scenes in this book. I WANT MORE CUTE SCENES BETWEEN EM AND KRIS, PLEASE.Also, Kris was an adorable cinnamon roll that I just want to hug all the time. Overall, this was an enjoyable book! I would have liked a little more excitement in the plot development, but as a whole, this was a quick and endearing read!3 / 5 Fangs*This ebook was given to me in exchange for an honest review. *
Posted by MissDaemon at 8:00 AM

Email ThisBlogThis!Share to TwitterShare to FacebookShare to Pinterest
Labels: Review Buy Now, Dramatically Ever After, Ever After #2, Isabel Bandeira, New Release, Review