The Weight of Night by Christine Carbo 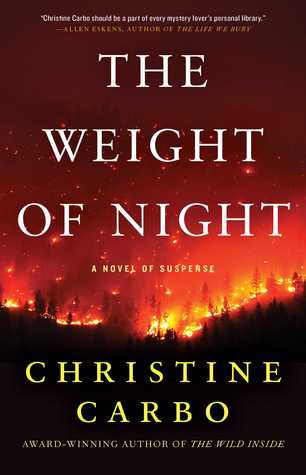 On most days, the wilderness gave me peace. But not tonight.

In a land sculpted by glaciers, the forest is on fire. Thick smoke chokes the mountain air and casts an apocalyptic glow over the imposing peaks and vistas of Montana’s Glacier National Park. When firefighters are called in to dig firebreaks near the small town bordering the park, a crew member is shocked to unearth a shallow grave containing human remains.

Park Police Officer Monty Harris is summoned to the site to conduct an excavation. But with an incendiary monster threatening to consume the town, Monty seeks help from Gretchen Larson, the county’s lead crime scene investigator.

While the two work frantically to determine the true identity of the victim, a teenager suddenly disappears from one of the campgrounds in Glacier. Could the cases somehow be connected? As chances for recovery of the missing boy grow slimmer and the FBI finds only dead ends, Gretchen and Monty desperately race to fit all the pieces together while battling time, the elements, and their own unresolved inner conflicts.

This is my first book by this author.

The Weight of Night is also book #3 in the Glacier series. It has a good suspense thread into the storyline with a couple of interesting subplots too. I think I would have enjoyed it more if I knew the characters from prior books.

The story develops in Montana. Specifically, in the Glacier National Park. At the beginning of the novel, firefighters are fighting a wildfire affecting the park. During the process, they uncover the bones of a young male but due to the fire, they have to move fast and get the local CSI involved ASAP before the fire destroys the evidence.

Monty Harris is a park police officer. He's divorced and still dealing with the loss of his best friend Nathan when they were younger after Monty's brother's prank ended badly. Nathan's body has never been recovered. Finding the skeleton of a young male makes Monty wonder if this could be Nathan.

Gretchen Larson is originally from Norway. She left her home when she couldn't deal with her past any longer. She's part of the CSI team and she's called to unearthed the remains. Little by little, we learn of the tragedy surrounding her life.

I like both main characters. I like their interactions and I'm hoping a romance will develop in the next book. The suspense was good enough and learning more about Gretchen's difficulties made her more likable too. Even though, the story was slow at times it still kept my interest. These two damaged characters were both well written.

A complimentary copy was provided by Atria in exchange for an honest review.
Posted by MrsLeif at 1:18 PM