Scandalous Ever After
by Theresa Romain 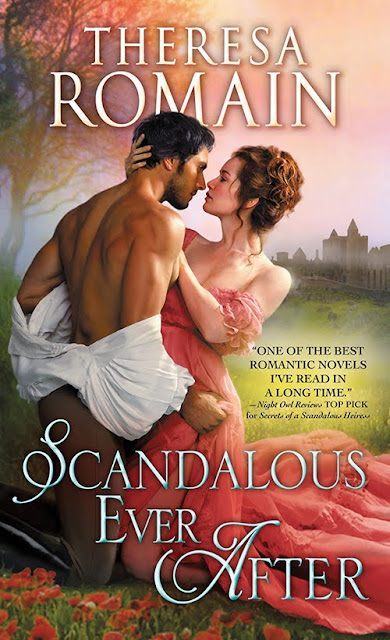 Does love really heal all wounds?

After being widowed by a steeplechase accident in Ireland, Lady Kate Whelan abandons the turf. But once her mourning is complete, her late husband’s debts drive her to seek help in Newmarket amidst the whirl of a race meet. There she encounters antiquities expert Evan Rhys, her late husband’s roguish friend—whom she hasn’t seen since the day of his lordship’s mysterious death.

Now that fate has reunited them, Evan seizes the chance to win over the woman he’s always loved. But once back within the old stone walls of Whelan House, long-held secrets come to light that shake up everything Kate thought she knew about her marriage. Now she wonders who she can trust with her heart—and Evan must decide between love and a truth that will separate him from all his heart desires. 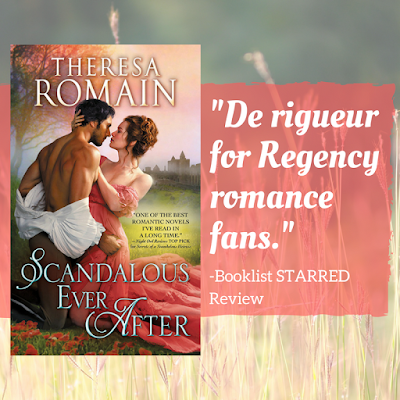 Kate skimmed the growing crowd in vain for the black-and-gold silks of the Chandler stables. Once there had been a time she knew her father’s racehorses as well as she knew her own siblings.
“I am the one who’s surprised,” Kate added. “It’s not the same family within which I was raised. Not even the same house.”
She remembered her father as always traveling, always absent. Now he’d made a community and placed himself at its heart. It was sweet to see, but odd in its unfamiliarity.
The changes were all to the good—except maybe those Jonah had gone through. Who could be certain? He could not be coaxed to speak of his wayward wife, even to Kate. Instead, he had passed the years between Newmarket and the Chandler stud farm, where promising young horses received their first training for a life on the turf.
Kate had been trained in the same way, but she’d been less obedient than one of Sir William’s foals. Alone of the four Chandler siblings, Kate had found the people involved in the world of the turf more interesting than the horses. Because of this, she had been eager to leave Suffolk County; to meet more people and spend less of her life at the races.
At the moment, she was not sure why. A spark of excitement sang lightly over her, following her contours like a skimming hand, setting her to shivering.
“You are cold? We ought to get you indoors.”
Kate was about to exclaim hotly when she recognized the spark of mischief in Evan’s eyes. “Rotten man. You couldn’t pull me away from the track today with the promise of a million pounds.”
“I don’t think anyone will give you odds on that.” Evan touched her nose with a gloved fingertip. “Biggie.”
The touch tickled, and she batted his finger away with a laugh. “Unless you’re a Chandler, you will lose a fingertip for calling me that.”
“Delightful, did I say? I misspoke. ‘Prickly’ might be a better term.” Again, he touched the tip of her nose—lightly, this time wordlessly.
Kate’s breath caught in her chest. “It might be.” She hardly knew what she was saying. She tipped her face, letting his finger skate across her cheekbone, then trace the curve of her cheek and jaw.
A damp breeze blew, chilling cheeks grown suddenly warm. “I—” Now, what could she say?
I like it when you touch me, because you are you.
I am afraid when you touch me, because it is new and unexpected.
She swallowed her confusion. “Will you share an apple with me?”
This was not such a non sequitur as it seemed. Food sellers were setting up their goods, and the scent of roasted apples and cider sweetened the air. The warm fruit scent married with the earthy smell of horses: sweat and manure and the clean grass they ate, along with the oil and leather of their tack.
Overhead, the sky was fully blue now.
Evan dropped his hand, doffing his hat to her. “If the lady asks me to share an apple, I can only accept. But from where did she get it? I hope it was not given her by a serpent.”
“As I haven’t bought it yet, you can make certain of that,” Kate said lightly.
With Evan at her side, she threaded through the growing crush, following the scent of roasting sweetness until she reached a gap in the crowd. Here a ring of stones marked the edge of a low fire built of wood scraps and rubbish. Next to it stood a rangy chestnut horse harnessed to a farm wagon. Around the edges of the fire walked a man in rough homespun and a floppy farmer’s hat, collecting pennies from the crowd, while a stairstep of wheat-blond children held sticks on which apples were skewered. The red skins browned and split, spitting juice onto the flames with a hisss and a heavenly warm scent.
“We’ll have one,” Evan said, handing a coin to the farmer. The man nodded at the smallest of the children, whose apple was the brownest. Stick and all, the lad handed the fruit to Evan.
“For you, Eve.” As soon as they had stepped back from the ring of stones, Evan handed Kate the stick. “It’s safe to eat. No serpents in sight.”
“With this many horses about, they’d all be trod flat.” As Evan turned to converse with another vendor, Kate sank her teeth into the apple.
Sweetness flooded her mouth, then a gentle tartness. And heat, sizzling heat! Oh, the juices within were almost boiling. Opening her mouth, she fanned it with one hand as the other held the staked apple. Please, don’t let me encounter anyone I know.
Evan turned back to her, all wicked mirth. “Did someone bite into the apple right away? For shame, Eve. You’ll lose your tongue that way.”
“Iss hur-fect,” she said, still fanning her mouth. “I all-aze do this en I eet.”
“Perfect. Right. I remember the dinner parties you used to host, in which turtle soup was scalded and so were the guests’ mouths.”
Her grimace would have been much more quelling had she been able to close her mouth.
With some difficulty, Kate managed to swallow the piece of apple. “It’s good. Would you care for a bite?”
“I can’t take it from you. My hands are full of race cards.” This must have been his second transaction: Evan had got hold of the cream-colored papers on which were detailed horses, owners, trainers, and riders for each race.
“I...could feed you a bite.”
His grip on the race cards tightened. “That is true. You could.”
Which was not a no, don’t be ridiculous.
Which might as well have been a yes.
She scooted closer, into the lee of Evan’s frame, and held up the apple to his lips.

Historical romance author THERESA ROMAIN pursued an impractical education that allowed her to read everything she could get her hands on. She then worked for universities and libraries, where she got to read even more. Eventually she started writing, too. She lives with her family in Wichita, Kansas.

Two of Theresa’s favorite summer activities:
If I were creating the sort of profile I admire, I’d tell you that my favorite summer activities include splashing in the ocean, or camping in the backyard after having a barbecue. But the truth is that I’m hundreds of miles from the nearest beach, and my favorite thing to do there was always to make a giant dolphin out of sand. And I can’t bear to be outside in 100+ heat, especially when the mosquitos are biting.

However, there are so many lovely little things about summer that I do enjoy. Specifically…

In SCANDALOUS EVER AFTER, there are no frozen treats or backyard campfires—but there *is* a sea, and Lady Kate Whelan and Evan Rhys find themselves on a road trip of a lifetime. Between ferries and floods, treats and horses and races, sickness and health and more than one scandalous interlude, these two old friends will find a love they never expected—and unearth secrets they never dreamed of. I hope you’ll enjoy this romantic summer read!

Email ThisBlogThis!Share to TwitterShare to FacebookShare to Pinterest
Labels: Review Excerpt, Giveaway, Pre-Order, Romance of the Turf #2, Scandalous Ever After, Theresa Romain