The Simplicity of Cider by Amy E. Reichert 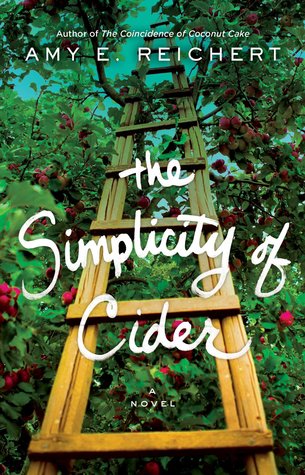 Fall in love with The Simplicity of Cider, the charming new novel about a prickly but gifted cider-maker whose quiet life is interrupted by the arrival of a handsome man and his young son at her family’s careworn orchard by the author of The Coincidence of Coconut Cake and Luck, Love & Lemon Pie.

Focused and unassuming fifth generation cider-maker Sanna Lund has one desire: to live a simple, quiet life on her family’s apple orchard in Door County, Wisconsin. Although her business is struggling, Sanna remains fiercely devoted to the orchard, despite her brother’s attempts to convince their aging father to sell the land.

Single dad Isaac Banks has spent years trying to shield his son Sebastian from his troubled mother. Fleeing heartbreak at home, Isaac packed up their lives and the two headed out on an adventure, driving across the country. Chance—or fate—led them straight to Sanna’s orchard.

Isaac’s helping hands are much appreciated at the apple farm, even more when Sanna’s father is injured in an accident. As Sanna’s formerly simple life becomes increasingly complicated, she finds solace in unexpected places—friendship with young Sebastian and something more deliciously complex with Isaac—until an outside threat infiltrates the farm.

From the warm and funny Amy E. Reichert, The Simplicity of Cider is a charming love story with a touch of magic, perfect for fans of Sarah Addison Allen and Gayle Forman.

"Happiness is always worth remembering, even when it was temporary."

The Simplicity of Cider is a story about family, loss, and love.

Sanna Lund lives in an apple orchard with her aging father Einar. The land has been part of their family for multiple generations. Sanna's family has been part of the cider business. To Sanna, nothing is more important than the apple orchard. She can't see herself going anywhere else and she doesn't want to. Her brother is another story. He's ready to sell. He wants to convince their father to sell. Sanna knows the debts are accumulating but she still has hope she can come up with a new cider to bring business back their way.

Isaac Banks needs a few weeks away with his son Bass before facing reality. A big change in their lives has occurred and Isaac is not ready to let Bass know about it. When Einar proposes a job helping around the orchard, Isaac believes it is the perfect distraction. He also can't seem to stay away from Sanna. Same goes for Bass. He becomes Sanna's little helper despite Sanna not wanting the company. She knows nothing about kids and she prefers them away from her but the more time she spends with Bass, the more she starts liking him.

Sanna and Isaac will have to work together to try to find a solution to save the orchard. It doesn't help that someone is trying to cause trouble and prevent Sanna from succeeding.

I had a couple of issues with the story. First, Sanna was mostly grumpy. It was hard to like her. She was rude to both Isaac and Bass. I could understand her desire to save the land but I also wanted her to face reality. At times, she came out as immature. The other issue I had was with the lack of concern by Sanna when she realized someone was trying to damage her trees. It never occurs to her to call the police and report it or even put some new securities around her property to prevent anyone else from entering again without an invitation.

I did like Isaac and Bass. Isaac made mistakes with Bass but I could feel how much he cared for Bass and he was just trying to protect him. Bass was adorable and he behaved just like a kid. He was curious and sweet. He tried hard to gain Sanna's approval.

Overall, the story was enjoyable with a good set of characters.

A complimentary copy was provided by Gallery Books in exchange for an honest review.